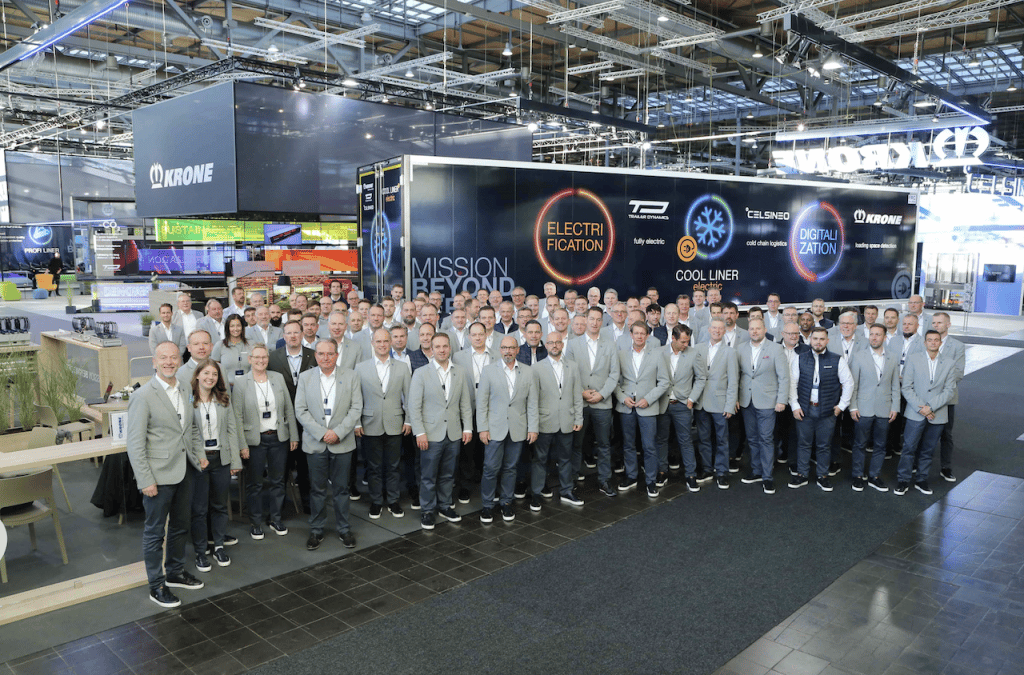 At a total of 11 exhibits in and in front of Hall 27, interested visitors were able to experience first-hand both innovative technology carriers and fully equipped Krone trailers for tough everyday transport operations.

Simon Richenhagen, Head of Marketing at Krone, is very satisfied with the great response

“Our entire team was very pleased to finally be able to meet so many international customers in person again after four years,” he said.

“There was particularly great interest in the ‘Mission beyond zero’ with its focus on the megatrends of digitalisation, automation, sustainability and electrification.

“This confirms that Krone is on the right track with these innovations.” In particular, the Krone eTrailer at the centre of the booth was the subject of intense discussion. This technology can save 20 to 40 per cent CO2 when driving.

The eCool Liner and eMega Liner prototypes, developed by Krone in collaboration with the start-up company Trailer Dynamics. A powerful e-axle is at the heart of the innovative technology, which supports the drive of the semitrailer tractor and also recovers braking energy through recuperation. The energy carried in the eTrailer is also enough for long hauls of more than 500km. The Krone eTrailers can be used with any conventional semi-trailer tractor with a plug-and-play process. Moreover, the eLiner technology in conjunction with BEV tractor units contributes to increasing the range of a fully electrified semitrailer on long hauls of more than 500 km.

Thanks to the eCool Liner with Celsineo unit, Krone is taking another step towards sustainability: In the innovative refrigerated semitrailer, the fully electric Celsineo cooling system ensures that the sensitive cargo is cooled without emissions in closely coordinated collaboration with the electrified drive. Celsineo, a joint brand from Krone and Liebherr, created an entirely new class of cooling systems based on the principle of three plug-and-play cooling modules with the same design, which is now also available in a fully electric version. Another highlight was the intelligent container chassis ‘Box Liner Automatic’ which the driver can adjust to the right container size from the cab at the touch of a button.

The key feature of the innovative Box Liner Automatic is the option of automated pre-settings. The driver can conveniently and safely initiate the setting of the container chassis for the container to be transported by pressing a button on the remote control from the truck cab.

Compared to the standard procedure, the new Box Liner Automatic technology from Krone is a significant leap. All of the previously required manual activities performed by the driver to adjust the container chassis are now a thing of the past. For the driver, this not only represents physical relief, but also significantly improved safety. At the same time, faulty setting of the chassis is avoided. Last but not least, the new automatic function also positively influences the transshipment speed: For the port drayage, the efficiency is expected to increase by about ten per cent.

The extensive daily live program of the ‘Krone Denkfabrik’ with presentations of start-ups, workshops and talk rounds also met with lively interest. Krone offered start-ups the opportunity to present and exchange their own ideas, therefore creating an innovation and communication platform. Every day of the trade fair, entertaining dialogue formats take place every hour: two- to three-minute start-up pitches with subsequent question and answer sessions, workshops or the ‘Tech-Talk’ with discussion rounds on topics such as the eTrailer or Smart Capacity Management digital load compartment monitoring using cameras.

Other formats included the ‘Deep Dive’ with closer views on Krone products and the ‘Politics Talk’ with well-known participants such as VDA president Hildegard Müller, BGL Chairman of the Board Prof. Dirk Engelhardt or Bernard Krone, Chairman of the Supervisory Board of the Krone Holding.