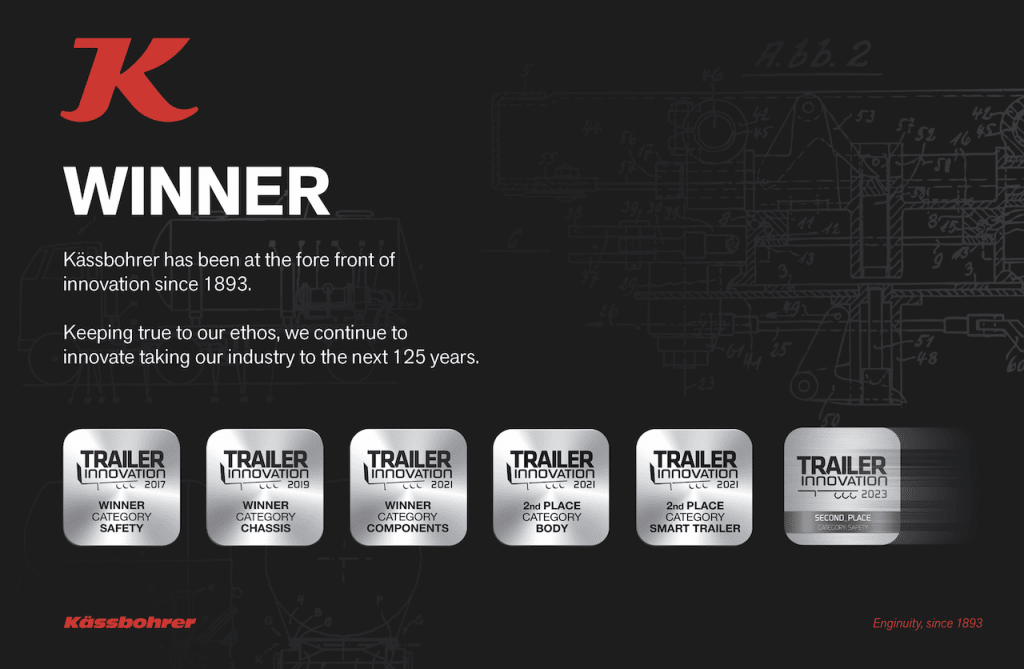 Trailer builder, Kässbohrer, has been awarded for delivering outstanding products and services as a result of its commitment to R&D.

Kässbohrer has proudly received the most prestigious Trailer Innovation Award five times in the past three consecutive terms.

Continuing its tradition in Trailer Innovation 2023 Awards, Kässbohrer won second place in the category ‘Safety’ with its Integration Protection Device alongside its two nominations with its Augmented Proactive Driving Support in the category ‘Concept’, and 360 Degree Experience of Digital Twins in the category ‘Smart’.

Winner of ‘Safety’ with the Integrity Protection Device
Constantly developing its vehicles to address the efficiency of operations, load and road safety; Kässbohrer works together with associations like TAPA.

Kässbohrer analysing TAPA’s risk of theft in international freight transportation, irregular migration, and human trafficking data and conducting field intelligence based on interviews with companies of various sizes, associations, and general stakeholders has developed an in-house safety notification system ‘Integrity Protection Device’, for the inner area specified detection and immediate notification of unauthorised entries to the trailer by any means, a low-cost practical device with 2 years battery life that can be installed on any trailer in aftersales workshops within the hour.

Kässbohrer’s patented Integrity Protection Device detects any unauthorised entry from the side, roof, floor, or door as soon as the interior space integrity is breached. Integrity Protection Device notifies the location of the exact breach point and inner area to as many designated groups as necessary via SMS, emails, and its optional web portal while at the same time sounding audio and visual alarms.

Kässbohrer conducted extensive R&D tests and confirmed with international transport companies’ road tests to confirm the functionality of the Integrity Protection Device in any environmental conditions such as dust resistance, water seal, electrical noise or vibration, and extreme temperature conditions from +70 degrees to -20 degrees.

‘Integrity Protection Device’ stands out from the expensive, hard to maintain, complicated, and new trailer installation requiring alternatives in the market that are often economically not feasible for transport companies to use and solves the problem of theft and unauthorised passengers, as well as conventional solution systems’ problems.

In the ‘Safety’ category, Kässbohrer previously won the Trailer Innovation 2017 Awards with Safety Bitumen Tanker and was nominated with K.SSK Safety Tipping Silo with Smart Control.

Kässbohrer has developed in-house Augmented Proactive Driving Support, which is a data-driven system to increase interactivity among vehicles and people in traffic to enable greater traffic safety is nominated in the category ‘ Concept’ for Trailer Innovation 2023 Awards.

Kässbohrer’s research finds, that digital-led lighting technologies, approved by European road authorities, can be used to increase interactivity among traffic participants and promote proactive safety. Kässbohrer Augmented Pro-active Driving Support is developed with the aim of preventing road accidents as well as prevention of health and safety risks during loading and unloading operations.

Kässbohrer Augmented Proactive Driving Support is a system consisting of cameras and sensors installed on the trailer that gathers speed, road signs, and warning data from the surrounding traffic. The data collected is processed and images are generated. These images are then projected on the road via controllable led light systems installed around and the rear of the trailer, with the aim of timely informing its surrounding of the trailers driving status and warning in case of more dangerous situations.

360 Degree Experience of Digital Twins nominated in the ‘Smart’ category
Kässbohrer invests in digital technologies to aid its development of efficient and safe semi-trailers. 360 Degree Experience of Digital twins by Kässbohrer, with its use of 3D modelling to hyper realistically, render the R&D digital twin of the widest product range in Europe, enables faster and more efficient product assessments and development and has been nominated for the Trailer Innovation Awards in the category ‘Smart’.

At Kässbohrer, product development after thorough due diligence of customer needs already involves digital modelling of the vehicle which goes through digital tests to aid physical vehicles. Kässbohrer has now leveraged the digital twin into a promotion and education tool, a first in the trailer industry.

By incorporating advanced realistic 3D imaging to the R&D generated digital twin, Kässbohrer has realistically rendered examples from Europe’s widest product range in their respective operational settings and made them available online as 360-degree website experiences.