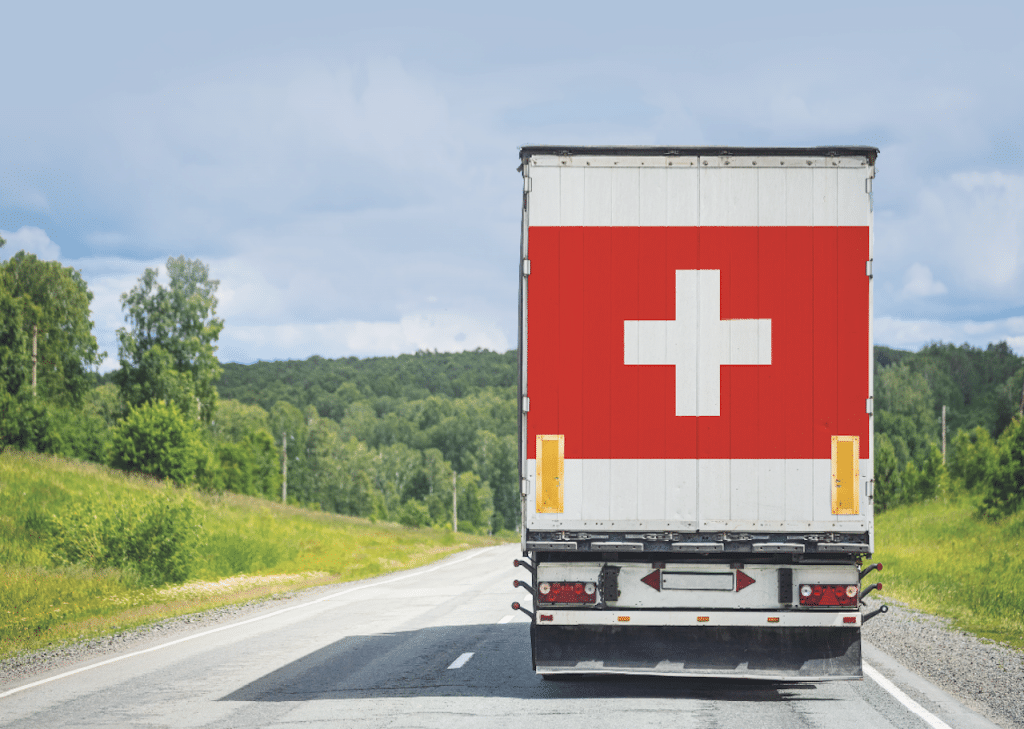 Logistics firm, Dachser, opened for business in Switzerland 55 years ago and has played a role in facilitating the timely movement of freight via various modes for the Alpine Republic.

In 2017, Dachser said Swiss precision was legendary, referring to the construction of the Gotthard Base Tunnel which was 57 kilometres in length, completed a year early and was at the time considered to be the longest train tunnel in the world.

Due to its centralised location in Europe, Switzerland, the country has always, Dachser claims, faced special logistical challenges.

With the opening of the Gotthard Base Tunnel five years ago, freight transportation via an efficient rail corridor through the middle of the Alps ensured goods running from Rotterdam to Genoa could do so with minimal environmental impact.

In addition to rail, road infrastructure is also important which accounted for 62 per cent of all transport routes in 2014 whereas as rail accounted for 38 per cent.

Dachser has been active in the Swiss market since 1967, servicing the country from multiple locations. It has since grown from a small freight forwarder initially focused on transportation between Switzerland and Germany.

Selina Hipp, a Business Development Manager for Dachser Chem Logistics, aims to establish her arm of the business as a preferred logistics partner for local chemical companies. Over a five-year period, with support from head office, her team is focused on market analysis and helping the sales organisation with queries about all aspects of chemicals as well as evaluating and preparing training courses.

In addition to her responsibilities, Hipp continues to look after the Idea2net innovation program in Switzerland together with an eight-person ideas committee. All employees can submit their ideas for improving the Dachser world. For example, in Switzerland work is underway on tutorials designed to help trainees with their day-to-day learning processes. One employee idea that is currently being developed by the Head Office in Germany relates to the technical aspects of customs clearance information.

There is another issue that lies close to Hipp’s heart. In the future, she would like to see more women pursue a career in logistics: “I’m often the only woman at the table, and I can imagine that a female point of view would be a major asset in many cases.”

At Dachser, women in key positions are still in the minority, but they are not a rarity. The company’s Grevenmacher branch in Luxembourg is managed by a team of young women. And other country organisations—in Europe and in Asia—also have women in management positions.

MW Partners Holding SA was founded in 2008 and comprises Stericenter SA, Mediwar AG, Marcel Blanc & Cie SA and Resot.Care SA. With its 55 employees, MW Partners Holding SA takes over the entire logistical and medical value chain for medical practices, hospitals and clinics. This enables hospitals and medical practices to concentrate fully on their core task, the medical care of patients.

“With MW Partners Holding SA at our side, we can also provide optimal support for the healthcare industry in western Switzerland in the future and take the load off of logistics activities from A to Z,” said Johannes Cramer, member of the Group Executive Board and Head of Logistics Services at Swiss Post.

Last year, the carrier smashed an all-time record delivering more than 200 million parcels. Swiss Post employees processed 202.1 million parcels. Compared to the previous year, that is 9.6 per cent more packages. The downward trend for letters continued in 2021: Postmen delivered 1,811 million addressed letters last year. That is 3.3 per cent fewer letters than in the previous year. Over the course of 2021, Swiss Post created 809 additional full-time positions in logistics. It is thanks to the great commitment of all employees that Swiss Post was able to maintain its services even in these challenging times of the pandemic.

Parcel volumes continued to rise in the second year of the pandemic. The reasons for the significant increase are the booming online trade, also driven by corona restrictions and working from home. In 2021, Swiss Post employees processed 202.1 million parcels in the sorting centres and delivered them to all corners of Switzerland and abroad. That is another 9.6 per cent more parcels than in the first year of the pandemic (2020: 184.4 million parcels). Compared to 2019, there are even around 35 per cent more packages. For the first time in its history, Swiss Post has processed more than 200 million parcels within one year – an achievement that was ultimately only possible thanks to far-sighted planning and the tireless efforts of Swiss Post employees throughout Switzerland.

Swiss Post expects parcel volumes to continue to rise in the future. Accordingly, it continues to invest in its logistics: The aim is to double the sorting capacity by 2030. Specifically: Swiss Post will invest around 1.5 billion francs in its sorting and delivery infrastructure by 2030. This includes the expansion and modernization of the existing centres, but also the construction of additional regional parcel centres . With these investments, Swiss Post is securing existing jobs and is expected to create around 1,500 additional jobs by 2030.

A look at Swiss road safety
The International Transport Forum released an annual report on the development of road safety in 2020. Switzerland was one of the participating countries and the report details how the pandemic has affected mobility patterns and impacted the number of road fatalities.

Switzerland recorded 187 road fatalities in 2019, representing a 19.7 per cent year-on-year decrease. The proliferation of e-bikes has caused safety concerns in Switzerland. The current national road safety strategy (Via Sicura) was evaluated in 2017. Four measures, in particular, contributed towards a substantial decrease in the number of road casualties: The ban on alcohol for new and professional drivers, the compulsory use of daytime running lights, legislation governing extreme speeding offenders and certain infrastructure measures.

On 16 March 2020 Switzerland introduced lockdown measures in response to Covid-19 which affected the movement of people and goods and in turn the exposure to road incidents.

Compared to the average 2017-19, number of road deaths decreased by 33 per cent in March 2020 according to preliminary data and there was no change in April.

Interestingly, the cost of road crashes in 2017 was 17 billion francs which represented 2.4 per cent of Gross Domestic Product (GDP). This estimate of the total economic burden is based on a willingness-to-pay approach. The estimate includes non-reported crashes. The responsibility for the organisation of road safety sits with several agencies.

Due to Swiss federalism, many organisations are involved in and responsible for road safety, including local and cantonal authorities, special interest groups and insurance companies. The leading roles in road safety are taken mainly by three organisations: the Fund for Road Safety, the Swiss Council for Accident Prevention (BFU) and the Federal Roads Office (FEDRO). The Swiss Federal Council regulates the national road safety policy and is responsible for the Via Sicura road safety program.

Switzerland’s road safety action program Via Sicura was adopted on 15 June 2012 by the Swiss Federal Council. A range of safety measures has been progressively implemented since 2013. No quantitative target was set under the Via Sicura program.

The Federal Roads Office (FEDRO) has proposed setting a target of no more than 100 deaths and 2,500 serious injuries per year by 2030.

An evaluation of Via Sicura was completed in 2017. The evaluation concluded that three years after the first measures entered into force, Via Sicura had had a positive impact on road safety. Four measures, in particular, contributed towards this positive result: the ban on alcohol for new and professional drivers, the compulsory use of lights during daytime for motor vehicles, the legislation governing extreme speeding offenders and certain infrastructure measures implemented in 2016.

An S.CUe electric cooling unit developed by Schmitz Cargobull is also used. The electric cooling unit is installed on the bulkhead of the W.KO, and provides improved and sustainable local pollutant and noise reduction by cooling the goods without producing emissions. Schmitz Cargobull designed the fuel-powered Schmitz Cargobull S.CU cooling unit, which is built for consistently high refrigeration capacity, as a modular system right from the start, so that only the diesel generator set is omitted for the S.CUe on the swap body. This means that, in general, many identical components can be used within the cooling unit, resulting in advantages in terms of service and the supply of spare parts, as no special parts have to be kept in stock. For sustainable electrical cooling of the swap body, all relevant components, such as the compressor and fan are operated electrically.

The electricity is supplied using the standard CEE three-phase connection, for example at rail connections or via a generator on the truck. The respective further developments of the W.KO and the electric cooling unit have greatly simplified the operational use of swap bodies.

“Schmitz Cargobull products facilitate our operational business,” said Railcare CEO, Philipp Wegmüller. “The standardised swap bodies in particular simplify and speed up maintenance, repair and spare parts procurement. Due to the user-friendliness, we can keep instruction and training times for employees within reasonable limits and the practicality provides for safety and increases the availability of the equipment.”

The logistic company’s headquarters are located in Härkingen in Switzerland. It has been operating for more than ten years and has 429 employees. In addition to conventional road and rail logistics, Railcare’s expertise lies in the active transfer of traffic from one transport mode to another through unaccompanied combined transport. The entire transport chain, including road and rail transport, terminal functions and operator and forwarding tasks, is offered by one provider. Railcare has been part of the Coop Group since 2010.

Fast Fact
Schmitz Cargobull has been represented by its own subsidiary in Switzerland for many years. Here, the customer can find reliable and innovative solutions for his transport tasks. In addition to the sale and leasing of new and used Schmitz Cargobull trailers, the Swiss location has its own workshop. Here the qualified team takes care of maintenance and repair, including the repair of accident damage or MVI (motor vehicle inspection) preparation, so that trailers are ready for use again as quickly as possible. Customers can also rely on a 24/7 cooling unit service within the framework of Schmitz Cargobull’s Full Service contracts, which includes maintenance and wear-and-tear work. This minimises both downtime and idle time. The OEM’s own local spare parts offering completes the service. Numerous original components and chassis and wear parts are always in stock and therefore quickly available.