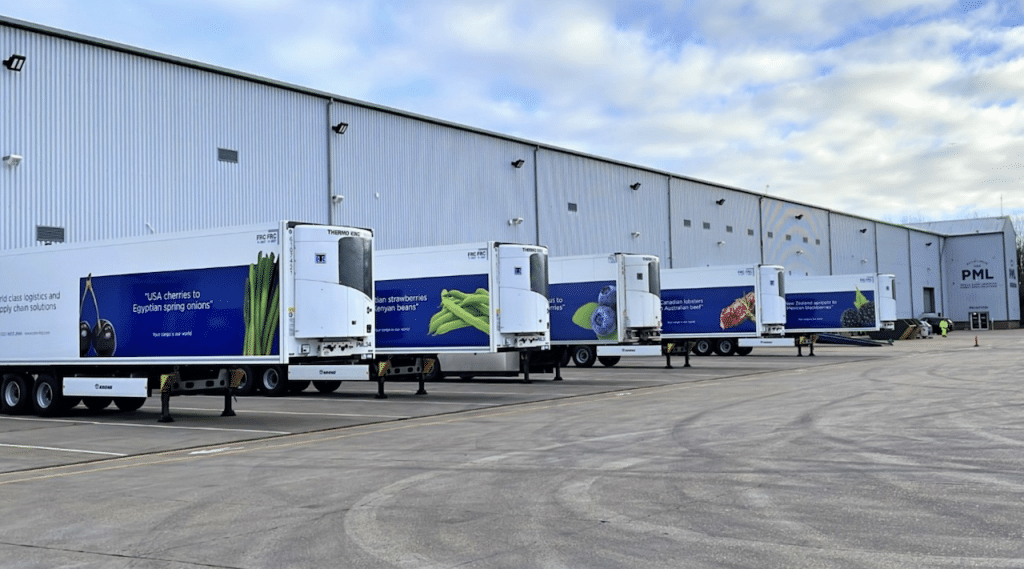 Dual temperature trailers are providing the versatility an air freight specialist needs for its £5.5 million expansion into port logistics.

Perishable Movements Ltd (PML) has specialised in moving perishable goods from Heathrow Airport since 2003. Last year the company invested £5.5m in a depot at Lympne in Kent to do the same for goods from Dover.

PML ships perishable goods from Dover to a temperature-controlled warehouse, from which the company distributes them for last mile delivery. PML initially used sub-contractors for port freight but has acquired five Krone Cool Liner refrigerated trailers as it moves the work in house.

“Our owners recognised that the new red tape from Brexit would create opportunities for freight specialists like us,” said PML Transport Manager, Martin Kopicki.

“We have decades of experience in air freight, so it made sense for us to offer the same high level of service for port logistics. Having the right trailers is therefore vital to our business model.”

Krone Cool Liners use a continuous chassis design which absorbs force during coupling, uncoupling, and docking. The tail is protected by a fender and two bumpers, while the rear door hinges are recessed to optimise the opening angle. Other features include a flexible, ceiling-mounted air duct to evenly distribute cold air, as well as a leak-proof floor tray and water-tight aluminium kick strip.

“We are running some single temperature trailers from Heathrow, as the loads are typically one product such as blueberries or blackberries,” said Kopicki.

“We needed more flexibility for our port operations, and the Krone dual temperature trailers enable us to split loads, optimising our efficiency. The drivers like them because they are not as heavy as other trailers, which they prefer for return journeys, and the Krone trailers are also very easy to use.”

PML has an O-licence for up to 20 HGVs at Lympne and is currently taking delivery of 18 Iveco prime movers to run with its growing trailer fleet. The company took the Krone Cool Liners on contract hire from commercial trailer specialist, Hireco.

“Lympne represents a new venture for us and it is a growing entity,” said Kopicki. “Working with Hireco gives us the flexibility to scale up as we grow in line with demand.”

In other news, Krone has developed the retractable king pin RIAKSSCKP (Retractable Illuminated & Automated Krone Smart Security Comfort King Pin). To prevent unauthorised coupling of a Krone trailer, the king pin RIAKSSCKP is automatically retracted into the front plate during uncoupling as soon as it is separated from the tractor’s fifth wheel plate. In this state, the trailer can no longer be coupled with a tractor unit.

If a parked Krone trailer with retracted king pin RIAKSSCKP is to be coupled, the driver of the tractor unit must first send a verified signal to the trailer via Krone Telematics. The mechanism that extends and engages the kingpin can only be triggered with this signal; the trailer can then be coupled up as usual. A useful and helpful feature is also the integrated lighting of the kingpin RIAKSSCKP, which switches on automatically and activates the parking lanes as soon as the driver in the tractor engages reverse gear. These visual signals are of course also displayed on the Krone Telematics monitor. This makes the coupling process much easier, especially in the dark. In addition, the RIAKSSCKP kingpin projects the Krone logo as a hologram onto the ground during operation – an impressive branding element.

Another innovative highlight that has already proven itself in field testing is the voice control of the RIAKSSCKP. This allows the driver to control the kingpin easily and conveniently via his smartphone connected to Krone Telematics. All that is required here is the message “Hey Krone, activate the kingpin”. This voice control will be available in ten languages for the launch of the RIAKSSCKP at the IAA Transportation in September. This type of voice control function will also be used for numerous other functions related to Krone trailers in the future.

All Krone vehicles that also have Krone Telematics will be equipped with the automatically retractable kingpin RIAKSSCKP as series production from the end of September. The high-tech anti-theft device can be retrofitted to any model and can already be pre- ordered online in the Krone Spare Parts Shop. RIAKSSCKP is compatible with all standard fifth-wheel plates. Krone is also already in dialogue with several insurance groups, and there are initial signals that vehicle insurance rates could be reduced if RIAKSSCKP is installed on the trailer.

UPDATE: Krone has advised the RIAKSSCKP announcement is an April Fool’s joke.