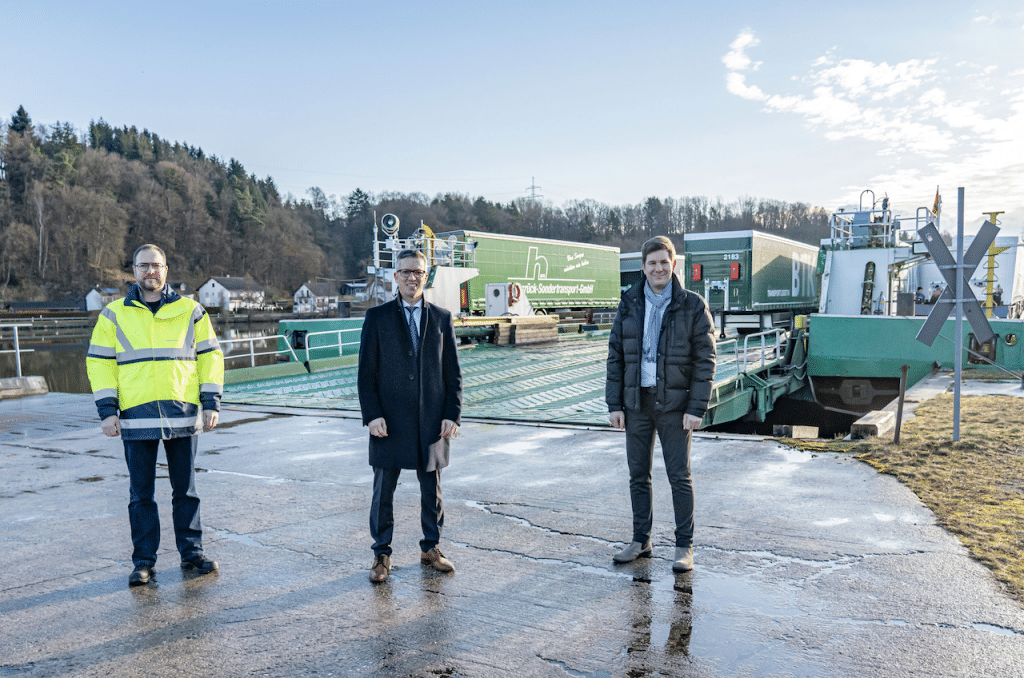 A new supply chain has been established which involves transporting new Schwarzmüller trailers from the plant to the port.

As part of a pilot, 35 Schwarzmüller trailers from the Hungarian Dunaharaszti plant arrived at bayernhafen Passau on 25 February 2022.

It is the first delivery of a newly established transport chain between the site and the Hanzing headquarters in the Austrian municipality of Freinberg, which borders the city of Passau.

The pilot test will now be followed by regular boat trips, announced the CFO of the Schwarzmüller Group, Mag. Michael Hummelbrunner, at the unloading in Passau.

The new platform vehicles have covered around 575 kilometres on the Danube. They were towed by truck from the Dunaharaszti plant to the port of Budapest and loaded onto the more than 100 meter long Bulgarian special ship. The transport takes place ‘Roll on Roll off’, the cargo is driven onto the deck and not lifted like a container. The trailers are transported by truck from the port of Passau to their final destination in Austria and southern Germany.

After 10 months of preparation, Schwarzmüller and its partners bayernhafen Passau, Spedition Hitzinger and the Rosenheim-based logistics company BTK were now ready for the first assignment. The premiere went smoothly, BTK was able to take delivery of 20 new vehicles. There were a few surprises during loading in Budapest. For example, up to 40 trailers and not just 35 can be transported with a full load. On the other hand, the mega trailer does not fit on the deck and has to be delivered further on the road.

For Schwarzmüller, transport on Danube ships has several advantages. Away from the congested long-distance routes, the Danube ship sails strictly according to the timetable and is easier to plan. The transport time is only slightly longer. Individual deliveries are replaced by the complete loading of a ship, which ultimately has an advantage in terms of carbon emission balance. The transport is also more economical due to the bundling. However, the demands on planning are increasing: There must be enough orders for the target region within a narrow time window and tractors are required for the loading processes.

“We don’t yet know exactly where the path will lead us. We are currently planning six to eight ships per year,” said Hummelbrunner. “New perspectives will arise from practice.”

The Schwarzmüller Group is active in most countries bordering the Danube. The key market of Poland is also in the Danube catchment area. In a few years, this transportation experiment could become a new international module for vehicle delivery.

In other news, Schwarzmüller is restructuring to improve service and production.