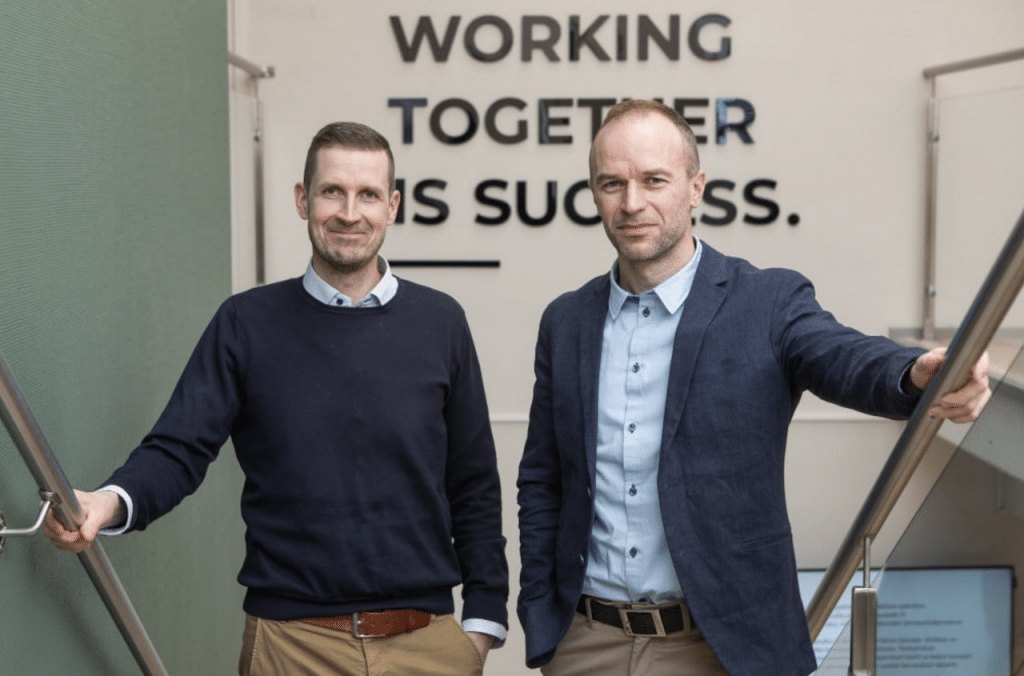 Matti Laurila, who held the role for more than five years, welcomed Christian Sundqvist to the executive position on 14 February 2022.

After completing his studies in industrial management at Novia in Vaasa in 2004, Sundqvist began his career at the metal and technology firm Componenta.

“I started as a method engineer and then became production manager,” said Sundqvist. “The job assignments were very instructive; gaining insight into Volvo’s production system was especially interesting. Componenta was making parts for Volvo’s factory in Skövde at the time.”

After a stint of four years at Componenta, Sundqvist accepted a CEO position at metalworking company, Keymet.

“What I didn’t know back then was that the financial crisis was lurking just around the corner,” said Sundqvist.

“The recession was a harsh trial, but we chose to go our own way. We bought a larger company and weathered the storm.”

When Sundqvist left the Keymet business after 10 years of service, the workforce in that organised had grown from five to 25 employees.

By May 2018, looking for change, Sundqvist joined boat manufacturer, Nautor’s Swan, in the capacity of production manager.

“We didn’t have an HR manager, so my job was quite versatile initially,” said Sundqvist. “I got to be both production manager and HR manager simultaneously. After a while, I could transition into focusing solely on being the HR manager.”

After 10 years as a business leader, the practicalities of the job felt familiar, while the manager position at Ekeri offered new challenges.

“I’m driven by a desire to develop, to challenge myself and at the same time help others reach their potential,” said Sundqvist. “That’s what prompted me to accept this assignment.”

The company’s values, structure, and good reputation were also reported to be crucial to his decision.

“There’s a positive atmosphere at Ekeri, and the employees like it here,” said Sundqvist. “One of my top priorities is that Ekeri will continue to be an attractive workplace in the future.”

Last year, Ekeri sold more transport solutions than ever before, and in previous years major investments were made in the expansion of production capacity.

“In my assessment, Ekeri is far from done growing,” he said. “The acquisition of OF Ekeri has strengthened our market position further, but there are still possibilities for us to expand, especially on the Nordic markets.”

Environmental awareness is also one of Ekeri’s key advantages according to Sundqvist.

“Ekeri is a pioneer in sustainable development, and I believe sustainable business is becoming increasingly important,” he said. “Climate-smart solutions might eventually become a standard criterion for suppliers to major customers.”

In other news, last year, Stranraer-based haulier J Richardson singled out an ‘old-timer’ Ekeri trailer for special praise, given its age and faultless service in the family-run firm for over 13 years. “And it was already six years old when we bought it,” said Director, Alan Richardson. “It’s a typical Ekeri trailer with the multiple side-opening doors but with a front-mounted fridge. Despite many years hard work, save for a couple of hinges, it has cost us nothing in terms of maintenance or repairs – it just keeps going and looks as good as the day it arrived.”

According to Richardson, the Ekeri trailer comes into its own on multi drops, carrying mixed loads such as cheese and sundry items, for various supermarkets in Scotland and England.

“We first got the trailer to help with return loads of 600kg bags and have used it regularly for multi-drops because the side opening doors allow us easy access to any part of the trailer for quick loading and delivery,” he said. “It has the flexibility of a curtainsider but with the strength and security of a refrigerated box van and, considering it’s pushing 20 years of age, it really has proved to be a remarkable asset.”