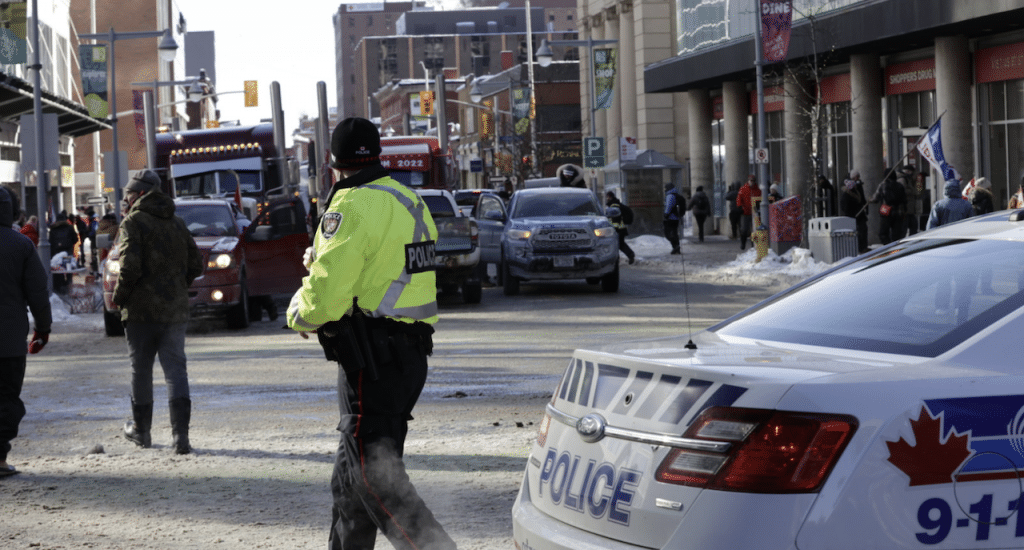 Mayor Jim Watson declared a state of emergency for the City of Ottawa yesterday due to an ongoing demonstration which has been described as an occupation.

“Declaring a state of emergency reflects the serious danger and threat to the safety and security of residents posed by the ongoing demonstrations and highlights the need for support from other jurisdictions and levels of government,” the City of Ottawa said in a statement.

“It also provides greater flexibility within the municipal administration to enable the City of Ottawa to manage business continuity for essential services for its residents and enables a more flexible procurement process, which could help purchase equipment required by frontline workers and first responders.”

A GoFundMe campaign which was created by Freedom Convoy organisers to support the demonstration with funds for supplies and fuel was terminated by the crowdfunding platform for violating terms of service. The platform prohibits the promotion of violence and harassment.

“Organisers provided a clear distribution plan for the initial $1 million that was released earlier this week and confirmed funds would be used only for participants who traveled to Ottawa to participate in a peaceful protest,” said GoFundMe in a statement released 4 February 2022.

Senator Ted Cruz recently asked the Federal Trade Commission via correspondence to open an investigation into the fundraiser to determine whether deceptive trade practices were committed.

“When people gave money, they gave it under the promise it would go ot the Freedom Convoy, not to whatever left-wing political ideology GoFundMe and other Silicon Valley companies support,” said Cruz. “They are deceiving consumers and it is wrong.”

The Canadian Trucking Alliance (CTA) has reinforced its position on the convoy protesting the bilateral mandate introduced by the Governments of Canada and the US that requires all essential workers, including truck drivers, to be vaccinated.

“The only way to cross the border, in a commercial truck or any other vehicle, is to get vaccinated,” said CTA.

“As an industry we must adapt and comply with this mandate and the vast majority have.”

CTA also claimed there are a great number of protestors who have no connection with the trucking industry and have their own agenda. Having said that, it asked those of the trucking industry that have chosen to protest regarding cross-border mandates should do so peacefully and then leave the city to avoid any issues to then welfare and safety of Ottawa citizens.

“Over the last 24 months, CTA has and will continue to work with the Government of Canada to mitigate the impact of Covid-19 on the supply chain,” said CTA.

“This includes several health and safety measures like raising vaccine rates in our sector. CTA will continue this work to benefit our sector and, by extension, the Canadian economy. This work will begin again this Monday when the Government of Canada hosts the National Supply Chain Summit.”

Today, Ottawa residents were advised by the state that traffic and service impacts were ongoing and non-essential is to be avoided, especially in the downtown core.

The services impacted include a childcare centre, libraries, City Hall and its amenities, Covid-19 vaccination clinics and buses.

“With the truck demonstration situation remaining very fluid, the City has contingencies in place for any accumulating snow,” said City of Ottawa. “The City intends to keep focus on pedestrian and emergency access routes through the area, clearing and treating sidewalks and facilitating the safe movement of emergency vehicles.

“We do not anticipate impacts to snow clearing operations in other parts of the city.”

Residential waste collection, however, is not expected to be impacted.

Ottawa Police have advised if anyone is attempting to bring material supports to the demonstrators they could be subject to arrest.

Over the weekend law enforcement worked to reduce the impact of demonstrators in the downtown core and responded to calls for service and to improve neighbourhood safety. Ottawa Police responded to more than 650 calls and had issued more than 450 tickets for a range of offences including excessive noise, use of fireworks, stunt driving, failure to produce documents and driving through a no truck route. Also, multiple vehicles and fuel were seized. So far, there are more than 60 criminal investigations related to the demonstration which are primarily mischief, thefts, hate crimes and property damage.