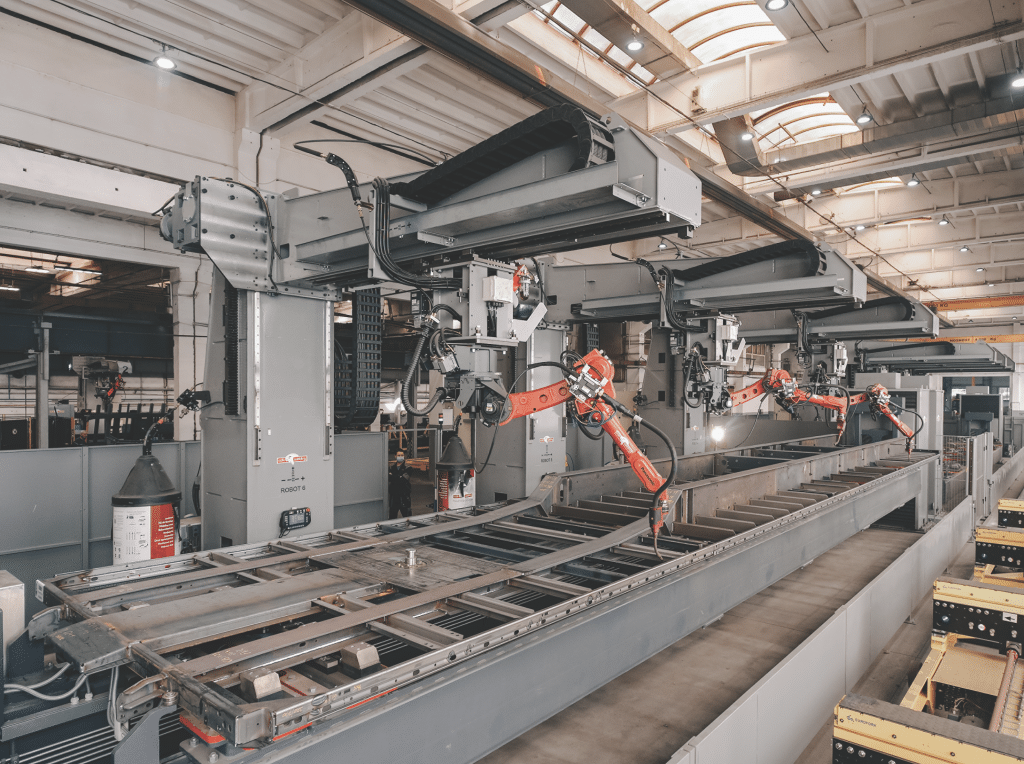 German OEM, Kögel, has produced superstructures for commercial vehicles as well as trailers and semi-trailers for trucks since its founding in 1934. The Kögel subsidiary in Choceň, Czech Republic, manufactures chassis frames for all product models of the brand Kögel. In order to meet the strict production standards and high quality standards of the parent company in Germany, the business turns to robotic welding specialist Valk Welding.

Last year, the partnership resulted in the implementation of a 54-metre-long fully robotic welding line for the production of complete chassis frames.

With a total length of up to 14 metres, a weight of over a tonne and extremely high demands on the strength and quality of the entire welded structure, chassis frame production requires truly advanced know-how and corresponding progressive production technology, which is no longer possible without robotic welding.

Three robotic workstations from Valk Welding
The Choceň plant with more than 80 years of tradition, which has been part of the Kögel Group since 1996, meets all the above-mentioned attributes of progressivity precisely be-cause its production reflects current trends and is constantly being modernised. In Choceň, they have over 15 years of experience with robotic welding, when in 2006 they bought the company’s first small welding robot, which started the era of robotic welding.

According to Aleš Hájek, head of production at Kögel in Chocen, the path of robotisation of welding at Kögel is largely linked to Valk Welding, although the first oldest robot was from a competing brand. “In 2006, Valk Welding only started to establish itself in the Czech Republic, when we chose a robot from another company, but in the meantime Valk Welding gradually grew and took the lead. Therefore, when we chose a partner for another robotic workplace in 2015, Valk Welding have already included Welding in the tender.”

The result was the purchase of a medium-sized robotic welding station located on the carriage and designed for welding larger subassemblies of chassis frames. The fact that in 2017 Kögel bought another identical workstation from Valk Welding and in 2019 even the third the same one proves that the company’s choice of robotic station and cooperation with Valk Welding proved successful.

After the subassemblies, the complete chassis
A few years ago, Kögel arose the need to increase production capacity.

“The Kögel company is growing, we produce a larger number of products every year, we are able to reach more and more customers, which has created the need to increase production capacity,” said Hájek.

As the Czech plant produces chassis frames as the only one for the entire Kögel Group, this would not be possible without the investment in expanding production capacity in Choceň. Due to the previous experience with the operation of robotic workplaces, the possibility of robotics and automation once again came to the fore.

“We also solved it by increasing the number of welders in production,” said Hájek. “However, the problem was the lack of qualified welders in the Czech Republic, we had to find foreign staff, which was not good for the company. Communication, but especially the ability to read technical and production documentation. And what is especially important: we need to adhere to the high quality of welds, a set quality standard.”

This is a key priority for Kögel. explains the production manager and adds that, based on these facts, they decided to develop a project for an automatic line for welding complete chassis frames. Valk Welding met the criteria the best
The automatic welding line project was launched in early 2019 and the line was set for June 2020.

“We contacted three robotic welding suppliers for the project,” said Hájek. “After providing the tender conditions, one of the companies immediately resigned due to the size and size of the project and so two companies remained.”

He adds that the choice of supplier had precisely defined criteria and the spatial possibilities were a significant limiting factor in the design of the technology. They did not build a new hall in Choceň for this purpose, they wanted to use the existing one, which of course they reconstructed. They renovated the high-load floors, the electrical installation and gas distribution were completely replaced to meet the high demands of the automated line, and a completely new LED lighting was also implemented.

In the preparatory phase of the project, a very intensive verification of the quality of welds from both potential suppliers on the chassis frame itself took place, together with a verification of the percentage availability of welds by specific robots. The service network, spare parts warehouses, speed and availability of service in the event of a breakdown were also important in the decision-making process, and training of operators, operators and programmers was another factor. Kögel also considered whether the bidding companies had sufficient experience to handle a project of this size as a general contractor. After evaluating all the set criteria, Valk Welding emerged as the winner of this tender.

Timely implementation despite the pandemic
The implementation of the project began in 2019. The implementation team that built the line was completely Czech, which was a nice bonus.
“The cooperation was at a high level and without the language barriers that a competing supplier would face,” the production manager of Valk Welding said, adding that this proved to be a great advantage during the outbreak, when delivery and completion dates seemed unattainable, but Thanks to the fact that the team was Czech, it was able to continue working under strict security measures even when the borders were closed.
He also appreciates Valk Welding’s role as a general contractor. “Even when awarding the project, we wanted to have the guarantee of one general contractor so that we could communicate with a representative of one company in future negotiations. Valk Welding really proved itself to us in this respect as well.”

The first test operation of the automated welding line began in May 2020 and standard operation was launched at the turn of August and September.

Offline programming and modular concepts
Currently, the line in Choceň operates in two shifts. The three-shift operation has not yet come into play, due to the global economic slowdown and sales due to the pandemic and the fact that Kögel is using this time to improve the logistics of the line’s inbound supply.

“At the moment, we are not going to full capacity yet, but we are ready for it. In three-shift operation, the line will allow us to produce 44-45 frames a day in 24 hours,” said Hájek. “We can operate the line with one person per shift. All six robots and all automatic processes running on it are supervised by one production operator,” he said – adding the savings are welcome but even more important is the issue of weld quality. “The output from the welding robotic line is as for welds, of constant high quality, there are no fluctuations in the quality of welds as in manual human welding, and that is the most important thing for us. It has been confirmed to us that we can increase our production capacity while maintaining or even improving the quality standard.”

With the implementation of the line, Kögel has moved to a new level in the field of robotic welding. While so far it has been able to robotically weld only partial subassemblies of frames, the new line allows it to weld complete chassis frames of semi-trailers and trailers. The overall efficiency of the production process is further enhanced by the offline programming of robotic stations offered by Valk Welding. Unlike previously implemented robotic workstations, where the program for a new product had to be programmed directly on the robot, the line has the option of offline programming. So, there is no downtime for programming, because the programmer prepares a program for welding a new type of chassis frame on his computer and transfers it to the line – deployed only after its completion.

And how does Kögel’s production manager see the future of robotics and cooperation with Valk Welding?

“When entering the project, we thought ahead and with our partner Valk Welding we designed a modular line,” said Hájek. “This means that if we need to further increase our production capacity, we can add another workstation with three robots. We have a pre-prepared hall, the possibility of extension they also have conveyors, we can easily expand the line with another module. We are ready to grow.”