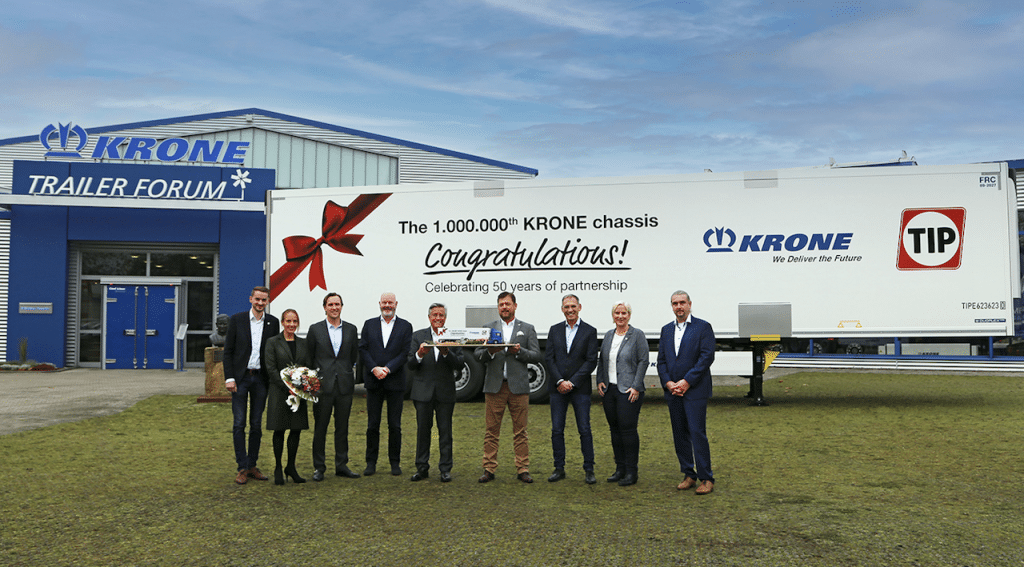 The vehicle with the millionth chassis number WKESD000001000000 has now rolled off the Krone production line: a Cool Liner from the Lübtheen plant for the Norwegian branch of the TIP Trailer Services.

In 1971 TIP was one of the first customers when Krone started their trailer construction business. The official handover of the chassis number millionaire with the special inscription ‘The 1,000,000th Krone chassis. Congratulations! Celebrating 50 years of partnership’ took place in Werlte.

The year 2021 marks the 50th anniversary of the successful partnership between the two companies. TIP, the international rental, lease and service company for the transport and logistics industry, is active in 18 European countries and Canada with over 120 locations. Bob Fast, CEO of TIP since 2003, underlined the importance of this long-standing partnership during the handover: “We are particularly pleased that we can look back on half a century of extremely reliable cooperation with Krone today. Receiving the millionth vehicle produced by Krone is a powerful symbol for TIP. We are convinced that we can always rely on Krone’s high-quality and innovative trailers in the future as well.”

Ingo Geerdes, Managing Director Sales at Krone, expressed his appreciation for the many years of trust: “TIP has been an outstanding Krone customer from the very beginning. We are very proud of the 50 years of partnership with one of the world’s leading commercial vehicle service providers, during which both companies have always grown dynamically in the service of the transport and logistics industry. The millionth Krone trailer handed over to TIP today is a Cool Liner. This refrigerated vehicle in particular underlines how many facets our cooperation has – because it was a request from TIP that made Krone enter the refrigerated trailer market 25 years ago.”

The first Krone commercial vehicle was produced in Werlte in 1971, exactly 50 years ago. Today, Krone manufactures a wide range of trailers and semi-trailers in its modern, highly automated plants in Werlte, Lübtheen, Herzlake and Tire (Turkey). Spread over the last 50 years, Krone has produced an average of around 20,000 units annually – more than one million vehicles in total.

In other news,  Sterac took delivery of 40 Krone curtainsiders, while TIP announced its latest acquisition in the UK.