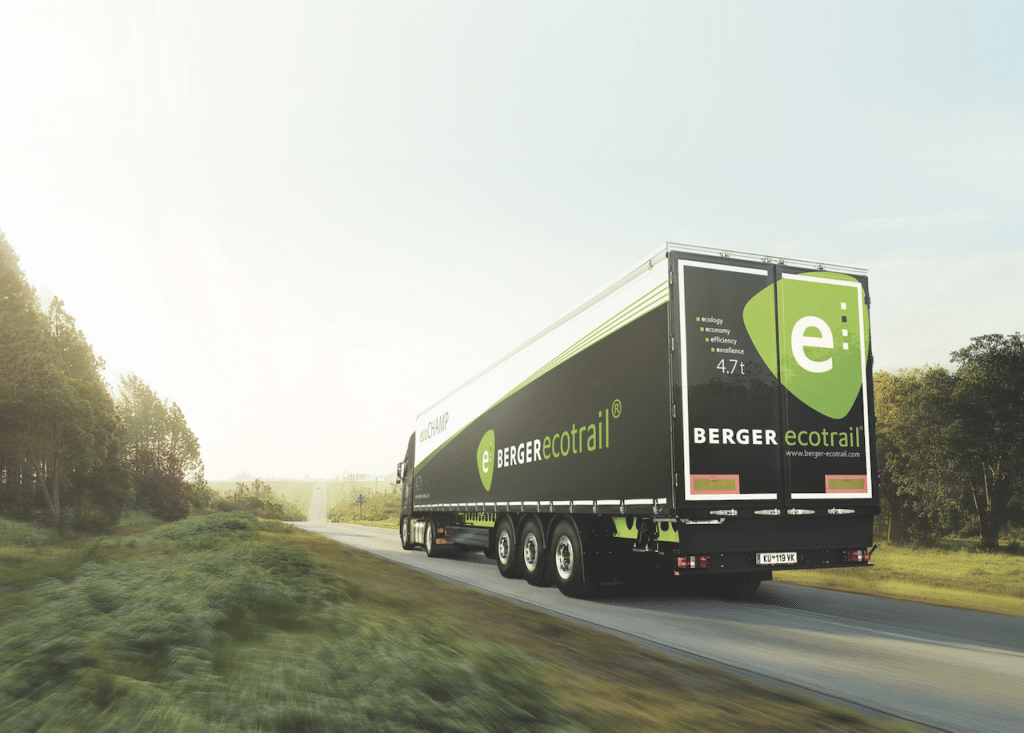 Johann Berger, during the 1960s, drove Italian marble across the Alps and one thought never left him ‘with a payload optimised semi-trailer, delivery volume could be increased’.

He identified opportunities in the Tyrol region – between northern Italy western Austria – to design lighter tare weight semi-trailers that could transport more marble than the competition. This entrepreneurial spirit led to the establishment of Berger Fahrzeugtechnik in 1994. The OEM nearly perished in 2008-2009 due to the global financial crisis however company shareholders agreed to pursue a bold strategy to develop an innovative product, the BERGERecotrail lightweight semi-trailer.

The first BERGERecotrail trailer, with a dead weight of 4.7 tonnes, rolled out of the company’s Radfeld facility in 2010. By 2016, the OEM produced more than 1,000 BERGERecotrail units which prompted the business to upgrade its production capacities with a new facility which commenced construction in 2017 and was completed by February 2019. This state-of-the-art facility, according to the OEM, is designed for optimal production. Hall cranes were installed in such a way that every point on the production line can be reached. The internally developed longitudinal beam welding robot also enable the highest standard of exact processing and thus achieves class B in welding quality. Due to a geothermal building complex, optimal and constant climatic conditions prevail and counteract the warping of the steel parts. Remaining deviations in the chassis are corrected within a few millimetres using induction heating. The perfect surface treatment of the chassis is guaranteed by the automatic sandblasting system with 16 spray wheels and an optimised painting process.

Today, there are about 100 employees across the business, 30 in commercial and 70 in production.

Coming back to Europe in 2014, he joined BERGER as Head of Project and Process Management and rose to the position of Managing Director in 2015, being responsible for designing the base for the successful growth process, as well planning and building the new production site to manage a capacity of 3,000 trailers.

He says payload optimised trailers are the future for every transport company – and that future is now.

“Lighter-weight trailers that reduce fuel costs and carbon dioxide emissions, while also allowing for more goods to be transported per trip is what we strive to deliver with our products,” said Litterscheid. “An investment of 20-30 per cent higher than a standard trailer pays itself back within one to three years of operation, depending on how a customer uses their equipment.” Every potential customer, according to Litterscheid, can test BERGER trailers for free. “We have manufactured original of payload optimised semi-trailers that are robust and of high quality, for more than 25 years. Our technology in semi-trailer construction and welding is also highly regarded. Our light trailers are built for high payloads with high quality components like S700 Steel further bolstered by quality workmanship. And due to their resilience the trailers are built for long life cycles to be driven for millions of kilometres.”

For 2021 and beyond, BERGER’s business priorities include: managing high market demand in the face of uncertain supply chains; strategic growth in select focus markets across Europe; integrating new sales staff, dealers and partners; and following a sustainability strategy for a transparent carbon footprint analysis.

As for innovation, the ecoTEAM with access to a modern trailer building facility is poised to demonstrate its concepts to large audience. The time is right, according to Litterscheid, as the market is turning to weight optimised trailers to reduce fuel and carbon dioxide emissions as well as provide safe payloads with heavier trucks.

“Our ecoCHAMP is 4.7 tonnes and can carry more than 34 tonnes theoretical payload,” he said. “It is the lightest serial semi-trailer on the market, and it can be used today by everyone, not just specialists. The ecoCHAMP for the beverage industry with a special certificate is a product we are pushing a lot, too. More payload means more pallets with drinks. That brings a direct benefit for the transporter and the forwarder. And our ecoCOIL can take for example 29 tonnes on 2.0 metre point load – that’s unique and brings a competitive advantage.” BERGER is experiencing growth in every market segment since it embarked on its ‘communication offensive’ following the launch of its higher-capacity facility.

“Our customers can experience the strong and direct benefits of payload optimised transport good with our ecoCHAMP and ecoCOIL, but also the demand of ecoMEGA is rising. So, it´s hard to pick one out,” said Litterscheid. “In general, the market for weight optimised trailers is booming because it´s the only chance to save payload when the trucks are getting heavier because of new engines for alternative power units.”

Fast Fact
BERGERecotrail operates a manufacturing facility in Tirol, Austria. This factory was built in 2018/19 and is among the most modern trailer factories in Europe. Annual trailer production is estimated to be around 1,300 – these units are sold by sales teams working in 18 countries throughout Europe.

The Radfeld forwarding company LKW STARK stands for innovation and reliability
Always on the cutting edge of technology, the forwarding company relies on proven relationships, such as the one with BERGERecotrail. The two companies have not only had a neighbourly relationship for decades, but also, with over 200 payload-optimised BERGERecotrail semi-trailers, LKW STARK has successfully supplied customers throughout Europe over the years.

For heavy goods, the semi-trailer should be as light as possible. That is why LKW STARK also uses vehicles from BERGERecotrail, because economy and ecology ideally meet in the innovative semi-trailer. With a dead weight of 4.7 tonnes, up to 2,500 kilograms more goods can be transported than with conventional vehicles. This not only reduces fuel consumption by up to 1.5 litres per 100 kilometres, but also increases the payload. The long-lived vehicles are often on the road in Europe for over ten years. We are therefore entering the new year with full strength and confidence. To this end, the forwarding company has expanded its own fleet with 20 Berger trailers.