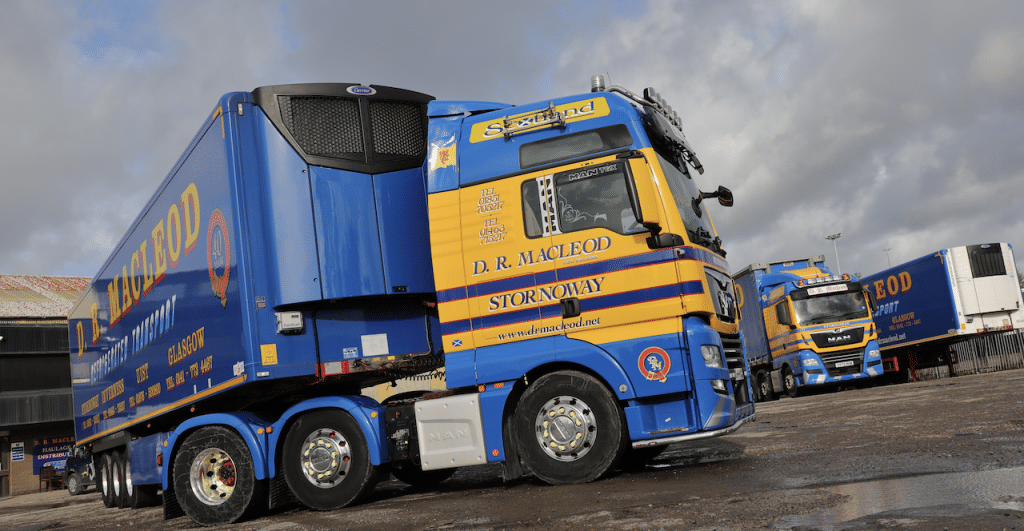 The new Carrier Transicold Vector HE 19 MT units are mounted to 13.6m Gray & Adams trailers and represent additions to a 100-strong trailer fleet, of which 30 are refrigerated.

Celebrating its 40th anniversary this year, D.R. Macleod ordered its first Carrier Transicold unit 12 years ago. The company has added an increasing number of Carrier systems over the years for use on both its rigid truck and trailer fleet.

“The outstanding performance and superb aftersales support we receive from Carrier has seen us order more and more of their products as we bring new assets into the fleet,” said Donald Macleod, Managing Director at D.R. Macleod. “The new Vector HE 19 units fit perfectly with our environmental strategy to lower fleet emissions, and because they’re so much quieter than anything we’ve had before, they’re also ideal when noise is a factor. This is particularly important when we’re parked up in the residential area waiting to catch the Stornoway ferry from Ullapool.”

Carrier Transicold’s flagship trailer refrigeration system, the Vector HE 19 MT unit combines the company’s all-electric E-Drive technology with a new ultra-modern multi-speed engine design that can reduce fuel consumption by up to 30 per cent. The unit also offers a 10 per cent saving in weight and reduces noise by 3 dB(A) – which to the human ear equates to being 50 per cent quieter. The unit is also reported to save up to 15 per cent on maintenance costs.

The Vector HE 19’s fully hermetic scroll compressor and economiser helps increase refrigeration capacity during pull-down by 40 per cent, while cutting the chance of refrigerant escape by 50 per cent. When plugged into the electrical grid on standby, the Vector HE 19 MT is also 19 per cent more efficient.

“We’ve been so impressed with the new Vector units that we’ve requested all new trailers we purchase outright and any additional we take on contract hire are mounted with them moving forward,” said Macleod. “When you add in the first-rate maintenance support we get from Carrier Transicold South & Central Scotland, it really is the complete package.”

The new trailers will operate from D.R. Macleod’s Glasgow depot, primarily making multi-drop chilled and frozen supermarket deliveries across Scotland and the Western Isles. On the road seven days a week, they are expected to clock up around 100,000 miles annually and will stay in service for at least eight years.

Founded in 1981, D.R. Macleod now operates around 55 trucks and 100 trailers, supplemented with smaller vans for local deliveries. Headquartered in Stornoway on the Isle of Lewis, the company also has depots in North Uist, Inverness, Skye and Glasgow.

In other news, pharmaceutical and healthcare distributor, Trans-Bridge Freight Services, has taken delivery of its first set of trailers fitted with Carrier Transicold Vector HE 19 MT (multi-temperature) fridges.