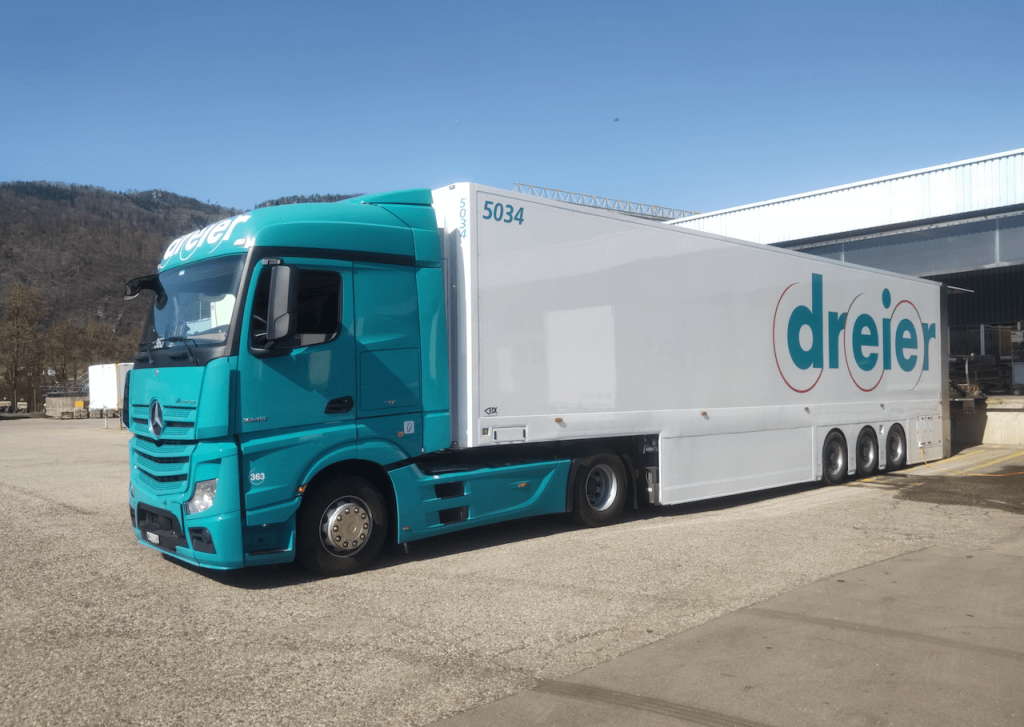 Daniel Dreier, co-owner and Board member of Swiss family business, Dreier, was one of the first interested parties in Van Eck’s Eckstreme double-deck semi-trailer.

The transport and logistics company, with more than 600 employees and a fleet of 300 trucks and 750 swap bodies, operates throughout Europe and North Africa.

Daniel Dreier held initial talks at the 2004 IAA Commercial Vehicle Show, where Van Eck presented the new Eckstreme. When Dreier showed the concept to his customer, the Swiss postal service, it quickly became convinced of the 30 per cent reduction in CO2 emissions.

The first test vehicle followed in 2006 by the commissioning of the double-decker fleet of 11 vehicles, which grew to 21 trailers four years later.

Dreier currently has 30 corner stretchers from Van Eck in operation. Full loads are shuttled between the three major parcel centres – Frauenfeld, Daillens and Härkingen – for the Swiss postal service. All double-deckers are identically equipped, with a height-adjustable intermediate floor, a lifting platform and Van Eck roller conveyor for pallets at the bottom. This allows loading times to be significantly reduced.

However, it is mainly roller containers that are loaded, or non-refrigerated foodstuffs.

“On average, each double-decker covers 150,000 kilometres a year in two-shift operation,” said Daniel Dreier. “We’re sure to keep them in heavy use for ten years.”

On Dreier’s initiative (in cooperation with Hugelshofer and the Swiss postal service), many tried-and-tested solutions were found in close exchange with the manufacturer that have proven themselves in tough continuous operation.

For example, Daniel Dreier relies on the lifting floor, which can be raised completely over a length of 13.6m.

“This makes direct unloading much faster once again,” he said – adding the lifting platform is extremely stable and the air-suspended independent wheel suspensions are a plus.

Maintenance is handled by Dreier’s own workshop, whose personnel are trained in the Netherlands – at Van Eck and at Tridec, the manufacturer of the wheel housings. Special training in one-day courses is also provided for the drivers. The driving style is not fundamentally different, but because of the lower ground clearance, it is important to pay attention to bumps in the road and then raise the air suspension in a targeted manner.

In the coming year, the two Swiss partner companies Dreier and Hugelshofer will procure a total of 15 trailers from Van Eck as a replacement investment and thus continue to be sustainable on the road.