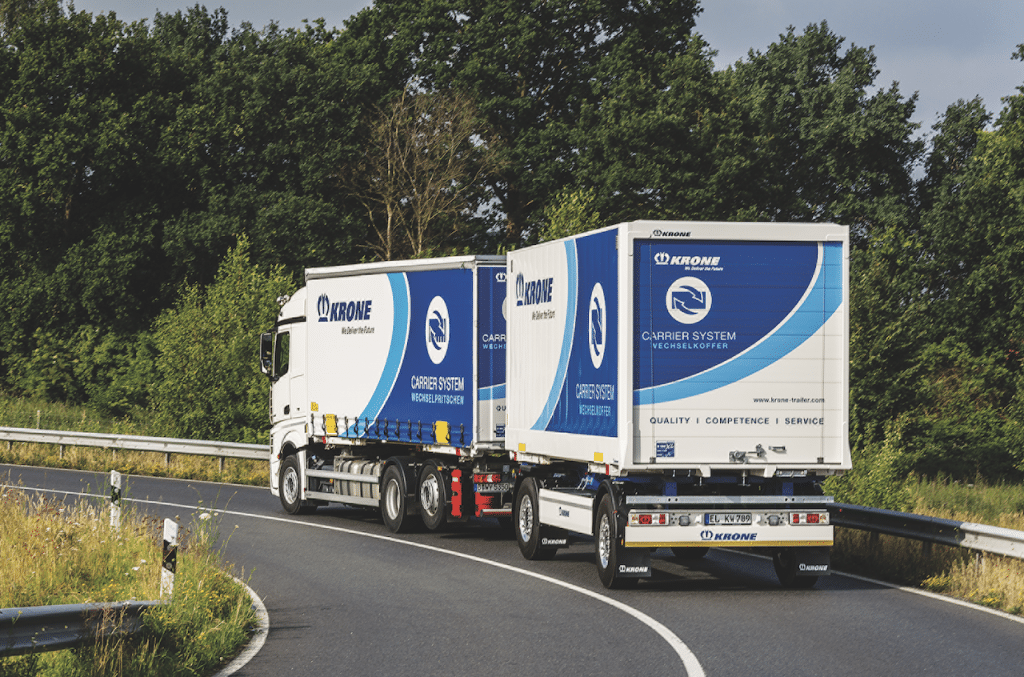 In order to be able to easily manage different telematics systems via a single portal solution, Krone Telematics relies on a manufacturer-independent platform.

Here, the various stand-alone solutions are combined into an all-in-one solution.

With its telematics functions, Krone Telematics ensures that fleet operators have online control over the position, condition or even temperature of their transports at all times. Thanks to the modular structure, they can put together their own customised package. For data-intensive temperature-controlled transport, there are suitable additional modules.

The flexible software architecture of Krone Telematics provides open interfaces through which the transport management systems of transport and logistics companies as well as partners – for example internet portals – can be easily connected. In addition to the flexible standard interfaces, individual adaptations are also possible. To ensure the highest possible cyber security despite this flexibility, an enormous effort has been made here. For example, the encrypted transmission to the backend server is carried out by a device-specific authentication token.

Extremely robust and fail-safe, as well as very powerful, is the Krone Smart Collect (KSC) telematics and diagnostics unit installed on the vehicle, which is also designed in the Krone Group for particularly data-intensive use in large agricultural machines.

Another highlight is the maintenance-free GPS solution KSC Solar, which was developed for swap bodies and containers without their own power supply. Thanks to the built-in solar panel, the connectivity of Blue-Tooth sensors and the ability to receive firmware and configuration updates ‘over the air’, this unit is completely self-sufficient and can be used flexibly after installation.

The collaboration makes Krone the first trailer manufacturer to provide real-time ETA (Estimated Time of Arrival) predictions for superior fleet management capabilities within their own trailer management solution Krone Telematics. Customers will gain access to the most accurate and reliable ETA for shipment deliveries on the market, powered by Shippeo’s proprietary machine learning algorithm which references over 200 data parameters.

“There’s a growing demand for trailers with built-in ETA prediction capabilities to manage transportation more effectively,” said Krone COO, Dr Stefan Binnewies. “Krone trailers are state of the art and now we’re adding more world-class connected services to our portfolio. Our trailers will be prepared for the digital requirements of the shipper. We want to offer the leading solutions in the market and Shippeo’s ETA is the most accurate and reliable available.”
Shippeo has integrated Krone Telematics temperature monitoring data on its real-time visibility platform, allowing all active users to monitor both delivery status and shipment integrity in real-time and all from one portal.

“Today many logistics companies still rely on a paper-based system where drivers have to verify that cold chain shipments have met stringent regulation but with real-time temperature monitoring, customer defined clients are notified as soon as temperature starts to change,” said Shippeo COO, Lucien Besse. “This allows potential breaches of maximum temperatures to be avoided and enables electronic delivery documentation.”

Krone 360° Trailer Service Europe-wide service initiative
Krone has developed a modular service concept. The transport company can choose whether to opt for just one basic module or to combine various modules according to its needs.
With its flexible modular system ‘Fair Care’, Krone offers to take over maintenance and wear-and-tear repairs on trailers for 24 to 72 months. Fair Care is available in three convenient packages that build on each other: ‘Light’, ‘Basic’ or ‘Complete’. This can be combined with the extension packages ‘Tyre’ for tyres, ‘Cool’ for cooling units and ‘Lifter’ for tail lifts, depending on requirements. Furthermore, there is the additional option ‘Breakdown’ for Europe-wide breakdown handling.

In addition to ‘Fair Care’, Krone has other useful services in its program, including a warranty extension for new vehicles, which can also be flexibly adapted.

Krone relies on its well-developed service partner network to ensure that drivers everywhere in Europe can always find the right service workshop quickly and easily. Through the cooperation with Alltrucks Truck & Trailer Service alone, there are more than 700 service partners in 14 European countries who offer a comprehensive and brand-independent service for trucks and trailers. Using the Krone Service Locator, which is also available as an app for smart phones, Krone service customers can find the nearest specialist workshops in a matter of seconds.

“With the Krone 360° Trailer Service, we provide our customers with a comprehensive service program from which they can put together a customised package – entirely according to their requirements,” said Krone Managing Director, Ralf Faust. “This allows transport companies to reduce unplanned downtime and optimise their cost planning and total cost of ownership in the long term.”

Krone telematics unit now also with solar power
Earlier this year, Krone developed a new version of the Krone Smart Collect telematics unit for its popular swap systems. Thanks to the integrated solar panel, the telematic unit runs autonomously and maintenance-free after installation.

This development addresses battery management issues associated with the tens of thousands of swap body vehicles that can often be found on the road for weeks on motorways before they return to their home depot.

For these operations, has developed the new Krone Smart Collect Solar (KSC Solar), with built-in super capacitor, can use the stored solar energy in the range from -20 °C to +60 °C, i.e. even in extreme temperatures. Even during longer periods of gloomy weather, the integrated battery lasts up to around 445 hours and thus survives more than 18 days without sunshine.

When installed, the compact KSC Solar (230mm x 130mm x 21mm) is safely recessed between the roof strips on the KRONE swap body. Having undergone extensive field testing, the solar-powered telematics unit is available immediately and is offered for new swap bodies ex-works and as a ready-to-fit retrofit kit.

With the KSC Solar, Krone is closing the gap of swap bodies that are not permanently powered, thus offering telematics for the entire fleet. Krone Smart Collect was successfully introduced in 2016 and is now in use on more than 24,000 trailers.

In other news, Aachen-based innovator, Trailer Dynamics, and Krone have partnered to develop an electrified trailer ready for series production.