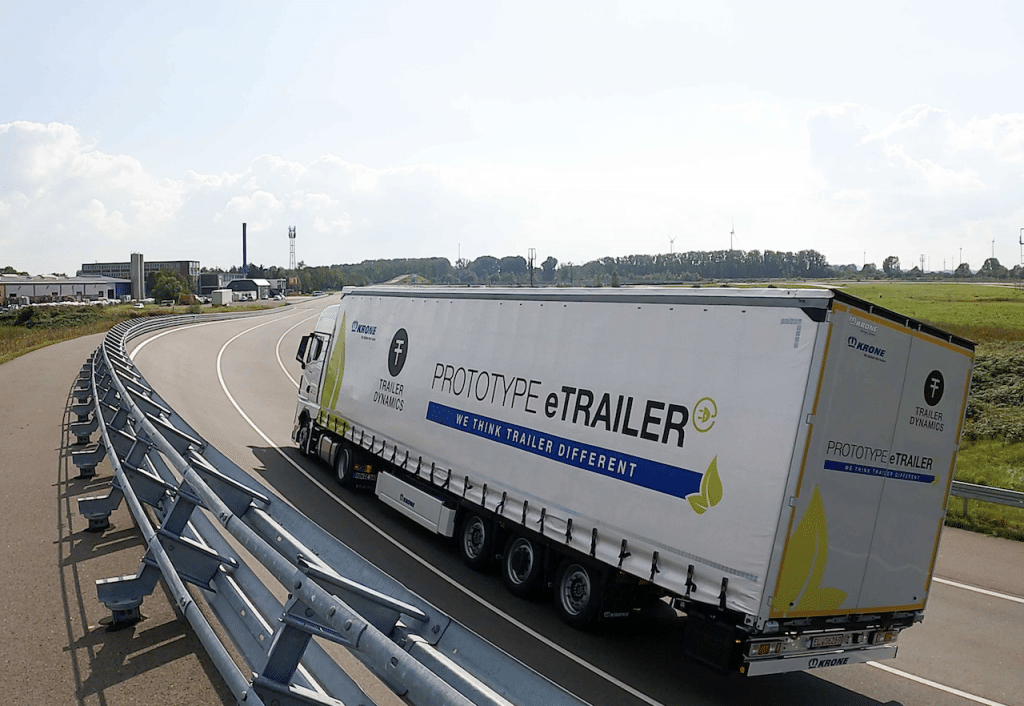 The prototype eMEGA Liner vehicle is expected to reduce diesel and C02 emissions of diesel semi-trailers and increase the range of BEV semi-trailers. It debuted at the Krone Executive Logistics Summit at the Krone Future Lab in Lingen at the end of September.

During the first test runs, which were accompanied by SGS TÜV Saar GmbH, the eMega Liner was already able to achieve the targeted diesel and CO2 emission reductions of up to 20 per cent.

Trailer Dynamics’ innovative technology works with closely coordinated components. The key element is a powerful e-axle, which drives the semi-trailer and also recovers braking energy through recuperation. The battery energy carried in the eTrailer is sufficient especially for long distances over 500km.

If the charging infrastructure on the planned route is not sufficient, an on-board charger will be available to bridge the gap. Another highlight of the Trailer Dynamics development is the intelligent control software, which optimally uses and distributes the battery-electric energy over the entire route. Thereby, the functionally reliable real-time control of the system is independent of the manufacturer of the semi-trailer. Overall, the semi-trailer system becomes an electric plug-in hybrid through the intelligent combination of eTrailer and diesel truck.

“With Trailer Dynamics’ eTrailer technology, we are able to significantly reduce the diesel consumption and CO2 emissions of a semi-trailer and make a substantial contribution to climate neutrality,” said Michael W. Nimtsch, founder and Managing Director of Trailer Dynamics.

“Since the eTrailer from Trailer Dynamics can be combined with any semi-trailer regardless of the manufacturer, we can bring the approximately two million diesel semi-trailers in the European fleet closer to low-emission Green Logistics.

Abdullah Jaber, Founder and Managing Director of Trailer Dynamics, added: “The concept of sensory control of the electric driveline developed by Trailer Dynamics enables a solid and functionally reliable control with the semi-trailer. We will realise further efficiency improvements in the field tests that are now pending and until they are ready for series production, thus ensuring a technically convincing market entry of the eTrailer from Trailer Dynamics.”

Trailer Dynamics Chairman of the Advisory Board and member of the Board of Directors of Bernard Krone Holding, Dr Stefan Binnewies said: “We are pleased to be able to offer our customers a new perspective on environmentally friendly transport with this strategic partnership. It is important to us that the total cost of ownership is in the foreground.”

Founded in 2018, Trailer Dynamics aims to contribute to the decarbonisation and sustainable logistics of longhaul diesel semi-trailers as well as increase the range of BEV semi-trailers with its eTrailer concept.

Trailer Dynamics’ core development is an electric drive train integrated into the trailer, which makes it possible to connect the eTrailer to any conventional semi-trailer in a plug-and-play process.

In the 2019-20 financial year, Krone Commercial Vehicle Group, Germany-based manufacturer of truck trailers and semi-trailers, generated sales of around €1.1 billion.