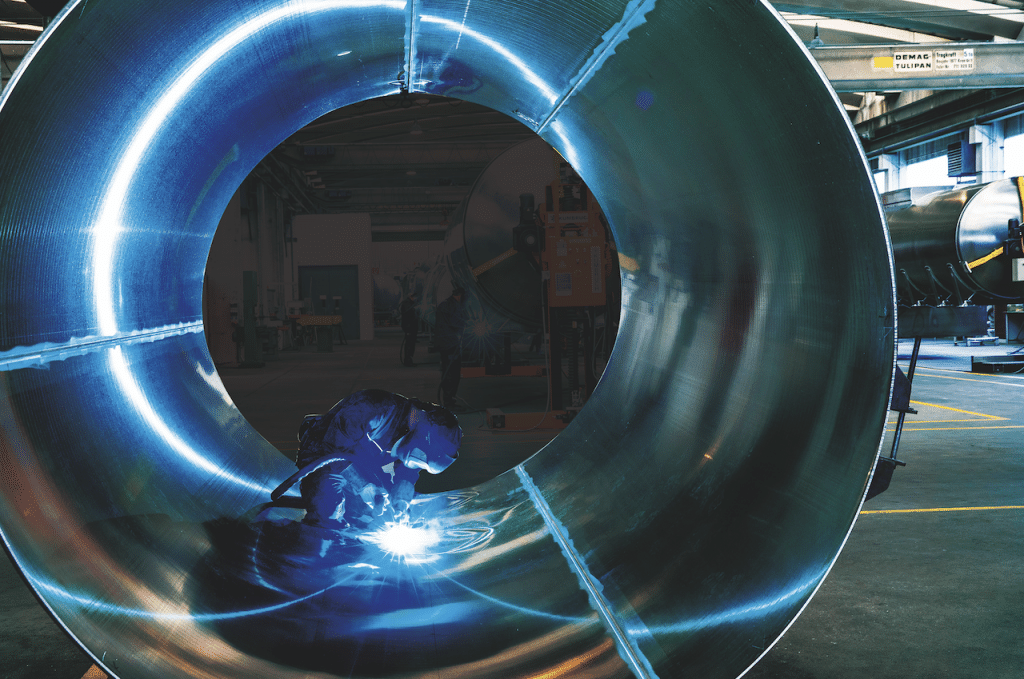 Industrial production in Austria, according to Trading Economics, advanced 23.4 per cent year-on-year in May 2021, following a revised record 33.8 per cent in April, reflecting a continued economic recovery and the low base effect.

In June 2021, manufacturing hit a new record. The UniCredit Bank Austria Manufacturing PMI climbed to 67 in June of 2021 from 66.4 in the previous month. The latest reading pointed to the third consecutive record growth in the factory sector, driven by an ongoing surge in new orders as demand continued to recover from the effects of the Covid-19 pandemic. Production levels were raised further, although the pace of output growth eased amid constraints from supply shortages. Lengthening input lead-times and sharply rising backlogs of work underscored a general imbalance between supply and demand, which in turn helped push up rates of inflation of both input costs and output prices to new record highs at the end of the second quarter. There were widespread hopes of a sustained recovery in demand over the next 12 months, and an eventual easing of supply chain disruption.

The private parcel service provider recorded a significant increase in volumes in the first half of the year – more than 33 million parcels moved which represent an increase of 28.5 per cent compared to the first half of 2020.
DPD Austria counteracts the ongoing parcel boom with a strong Austria-wide network as well as investments and innovations.

“The growth in online retail has risen inexorably since the beginning of the [Covid-19 pandemic] and continues to rise,” said Rainer Schwarz, Managing Director DPD Austria. “We do everything we can to meet this challenge to the satisfaction of our customers. To this end, we are expanding our Austria-wide network and investing in many areas – from technology to digitisation. We are aware that we are an important partner for maintaining the economic cycle are.”

In the first quarter of 2021, unbelievable growth rates were already apparent in the B2C area, according to the company. These continued in the second quarter.
“If you compare the first half of 2021 with that of 2020, this area has increased by almost 60 per cent and more than five million packages,” said Schwarz. “With these figures, we see further confirmation that consumer behaviour has changed permanently due to corona and that a decline to the pre-Covid level is hardly to be expected in this segment.”

In the B2B space – DPD’s main line of business – the company grew by almost 12 per cent in the first half of the year and thus two million parcels more than in the same period in 2020.

“We are countering all these developments, which are challenging for our entire organisation, among other things with investments in depot, tour and network expansion as well as in innovations,” said Schwarz. “We have earmarked around 20 million euros for this for the current year. By the end of the year we will have the largest parcel shop network in Austria with around 2,000 pickup locations.”

Founded in 1988 as the first private parcel service (at that time APS-Austria Paket System), DPD relies on the logistics infrastructure of its shareholders – Austria’s leading freight forwarders Gebrüder Weiss, Lagermax and Schachinger. DPD Austria offers a first-class range of services for national and international parcel distribution. Around 1,700 logistics experts work for DPD across Austria. The company has a transport fleet of 1,200 vehicles that carried more than 57 million parcels in 2020. The DPD pickup network now comprises 1,800 pickup locations (parcel shops and stations) throughout Austria. Thanks to innovative technologies, local know-how and first-class customer service, DPD offers the best possible parcel services for senders and recipients. As part of the DPDgroup, DPD Austria can fall back on a solid road network in Europe, has access to around 58,000 pickup locations throughout Europe and offers delivery to 230 countries / territories worldwide. 77,000 shipping experts work in this network to move more than 5.3 million parcels every day. With turnover of 210 million euros for the first half of 2021, the Schwarzmüller Group, situated in upper Austria, has rebounded from the Covid-19 pandemic. In the first six months of 2021, the company’s four factories produced 5,348 vehicles. Growth of 10 per cent compared to 2020 is anticipated, with a total turnover of 400 million euros (2020: 366 million euros). Also, the OEM’s order levels are reported to be far ahead of budget although materials shortages prevent an increase in production capacity.

Roland Hartwig, the CEO of Schwarzmüller, said an annual turnover of 400 million euros would be the company’s highest ever.

“The boom is being driven by the new Power Line vehicles for long-distance transport,” he said. “This segment accounts for 2,950 vehicles, or 55 per cent of this year’s production output. Construction and infrastructure is the second-largest, at 45 per cent or 2,400 vehicles. This means the ratio seen in previous years has reversed, due to the current higher backlog in long-distance transport. The Power Line has become a niche product now too, with significant advantages over standard trailers, as Hartwig emphasised. This reflects the strategic focus on supplying vehicles to demanding haulage companies, which expect a higher level of performance from their equipment.”

As for construction and infrastructure, tippers and moving floor trailers proved popular for Schwarzmüller, with Hüffermann container transport vehicles also in high demand.

In Austria and Poland, for instance, and also in Germany, Hüffermann products are selling better than ever, according to Hartwig, who attributes this success to the combined sales force for both brands.

For the first half of 2021, Germany is still the largest single market for Schwarzmüller, with approximately 2,100 vehicles. Construction and infrastructure are the dominant segments there, making the market less dynamic than in Poland, where sales include a high proportion of long-distance trailers. In Poland, the sales target of 1,000 vehicles for the year has already been met, after just six months. In 2020, the OEM’s core sales territory was Austria, Hungary, the Czech Republic, Slovakia and Switzerland.

The trailer builder’s sales boom is reported to be not purely due to pent-up demand.

The current shortage of materials is particularly marked in steel and electronic components, Hartwig explained.

“Over the last six months, steel has more than doubled in price, or has sometimes been completely unavailable,” he said. “Practically all production areas have been running at full capacity. Government investment support for new trailers has stimulated demand further.”

The backlog from last year is likely to persist until the end of 2021. Hartwig then expects some easing in the availability of components.

The current boom, he said, includes a substantial number of advance purchases. This might have a dampening effect on business next year.

Schwarzmüller is also prioritising sustainability at all levels throughout the Group.

Product innovations such as Power Line allow noticeable fuel savings on empty runs. Greater load capacity also means fewer trips and reduced emissions. In Austria, Schwarzmüller has begun to supply the entire manufacturing process with photovoltaic energy. Equipment is currently being installed at all six production locations. The Group is also working to improve the energy balance in its international locations.

The next step for Schwarzmüller is growth at an international level.

“The greatest potential for us, as niche providers of trailers with guaranteed added value, lies in the large markets where we are still barely present,” said Hartwig. “There is plenty of room for us in the markets to the west and south.”

He added it has proved expedient to work with existing organisations for entry into medium-sized markets. Manufacturers of niche vehicles are often successful on a regional level. There are opportunities for them in international markets, but to realise these, they need a partner like Schwarzmüller. We produce almost all types of trailers for road haulage so we know how to achieve international success with them.”

JOST reflects on its presence in the Austrian market Although the Austrian market is very small on the European map, it is of great importance to JOST: The ROCKINGER brand, with its towing hitches, has a long tradition in Austria.

The ROCKINGER towing hitch RO*50E is particularly popular. This exclusive 50 mm hitch is equipped with the proven ROCKINGER release lever technology, where the pin only closes when the drawbar eye is securely and precisely in the jaw – no matter how unfavourable the drawbar eye angle is. The fact that this is always ready to be coupled is also always positively noticed by customers.

“Last year we introduced the new cast steel funnel for robust coupling, even under adverse conditions, and this has been very well received by customers,” said Robert Molitoris, JOST’s long-standing sales manager for Austria, and also highlights the rotating coupling pin, which ensures reduced wear.
The current designs of articulated or rigid drawbar trailers mean that in some circumstances towing hitches are difficult or impossible to reach. For this reason, ROCKINGER offers the possibility of retrofitting towing hitches with various remote controls and remote displays with its clever modular system. The latest product here is the remote control with Duomatic connection. The pneumatic version supports the opening of the coupling powerfully and simply via the connection to the brake interface at the rear of the truck.

But the latest innovation on the part of ROCKINGER is the Drawbar Finder, in which a camera sits protected above the towing hitch. In the sense of augmented reality, an image is superimposed on the driver with auxiliary lines, a bit like you know from reversing cameras in cars. There is only one big difference here: “We also have to offer the driver an auxiliary tool with which he can adjust the height to hit the drawbar” Robert Molitoris explains further. The Drawbar Finder can be retrofitted and does not require any work on the trailer. Thanks to JOST’s close cooperation with the OEMs, it is possible to transfer the image of the Drawbar Finder to the already existing displays in the vehicles.

ROCKINGER also offers all these options as a complete system, i.e. additionally pre-assembled on the crossbeam as well as with the LubeTronic lubrication unit, where the cartridge filled with special oil makes the grease filling in the automatic unit – like applications in low temperatures – smoother.

JOST also offers a contribution to automated driving in Austria with the fully automatic coupling system KKS. The trailer and body manufacturer Scheuwimmer GmbH Fahrzeugbau near Naarn/Perg is one of the first Austrian users to use the JOST KKS for internal transport and wants to increase efficiency as well as comfort and safety for the drivers.

The JOST KKS automatic coupling system enables the driver to carry out the process of coupling and uncoupling automatically, quickly and safely from the cab by remote control.