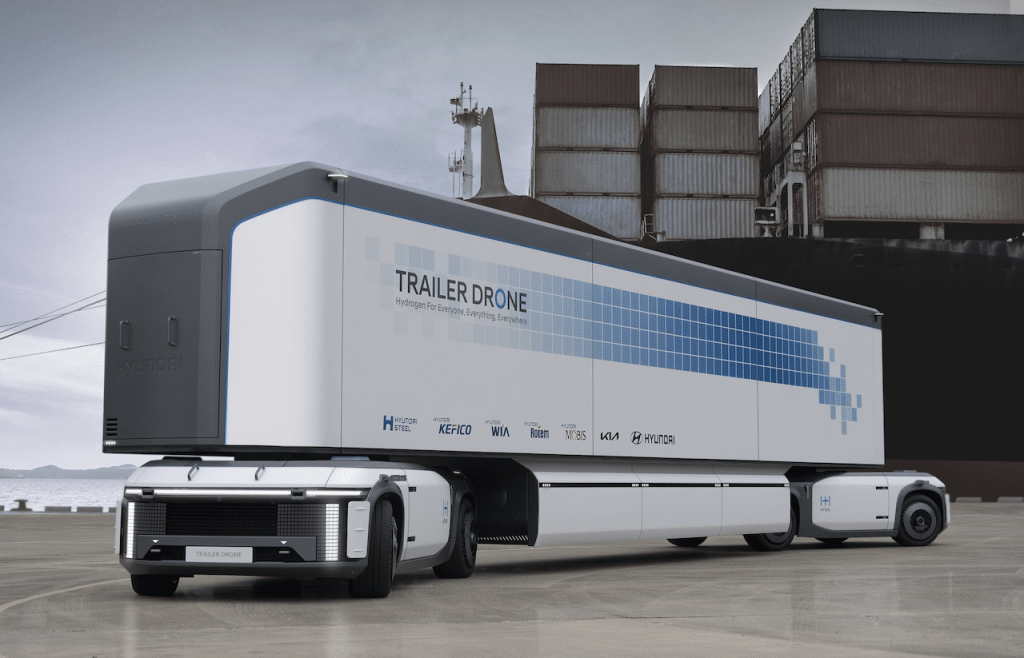 A hydrogen-powered container transportation system capable of operating autonomously with a double e-bogie configuration has been teased by Hyundai Motor Group.

This plan includes the electrification of all-new commercial vehicle models featuring fuel cell electric or battery electric powertrains as well as the application of fuel cell systems to all models by 2028.

In 2023, the company aims to introduce a next-generation fuel cell system with costs being lowered by more than 50 per cent, total package volume reduced by 30 per cent and power output doubled.

“Hyundai Motor Group’s vision is to apply hydrogen energy in all areas of life and industry such as our homes, workplaces and factories,” said Chung.

“The goal is to make hydrogen readily used for everyone, everything, and everywhere.

“We want to offer practical solutions for the sustainable development of humanity and with these breakthroughs, we aim to help foster a worldwide Hydrogen Society by 2040.”

The trailer drone concept, according to Hyundai Motor Group, is a hydrogen-powered container transportation system capable of operating fully autonomously. With the number of intelligently packaged hydrogen tanks tailored to the journey profile, the flexible and efficient trailer drone ensures more than 1,000km of sufficient range from a single charge, comparable to existing container transportation systems.

The autonomous capabilities of the trailer drone were not reportedly achieved by simply repurposing technology developed for passenger car applications. The unique requirements of container transport applications and the way container terminals operate meant that engineering teams from Hyundai needed to completely redefine how a container moves. As a result, the engineering team developed the ‘Fuel Cell e-Bogie’.

The Fuel Cell e-Bogie sits under the container just like a rail bogie and is a fully enclosed system with fuel cell propulsion and fully independent four-wheel steering.

The trailer drone concept requires two fuel cell e-Bogies to enable sideways movement. The trailer drone can, according to the group, move autonomously through portside operations and tight urban environments. Efficiency is further boosted by the ‘Cluster Mode’ which enables multiple Trailer Drones to travel together in an almost train-like configuration.

The Fuel Cell e-Bogie is not exclusive to the trailer drone and caters to a wide value chain such as ground logistics, construction, firefighting and disaster relief missions. It offers a multi-purpose platform, capable of a variety of objectives – all in zero-emission and autonomous operation. Meanwhile, since the development of its first FCEV in 1998, the Group has been preparing for the future of hydrogen. In 2013, the Tucson FCEV (ix35 Fuel Cell) was introduced, opening the door to the mass production of FCEVs. Then, in 2018, the company launched the next-generation fuel cell SUV, NEXO, and the world’s first heavy-duty fuel cell truck, XCIENT Fuel Cell, in 2020.

Now, the Group is backing hydrogen to play a significant role in building a sustainable future and reducing society’s dependence on fossil fuels. After two decades at the forefront of fuel cell technology development, the Group will expand its fuel cell technologies for wider applications of its vehicles, including additional mobility solutions and various energy utilisation.

According to the Hydrogen Council, a global CEO-led initiative of leading energy, transport, industry and investment companies, hydrogen energy will account for 18 per cent of global energy demand by 2050, with a market size of 2.5 trillion USD. The popularisation of hydrogen energy will also help cut CO2 emissions by more than six billion tons a year, while creating over 30 million new jobs.

Hyundai Motor Group has already started mass-producing a greatly improved version of the current XCIENT Fuel Cell, a fuel cell heavy-duty truck. It is also developing a prime mover based on the XCIENT Fuel Cell that will be released in 2023.