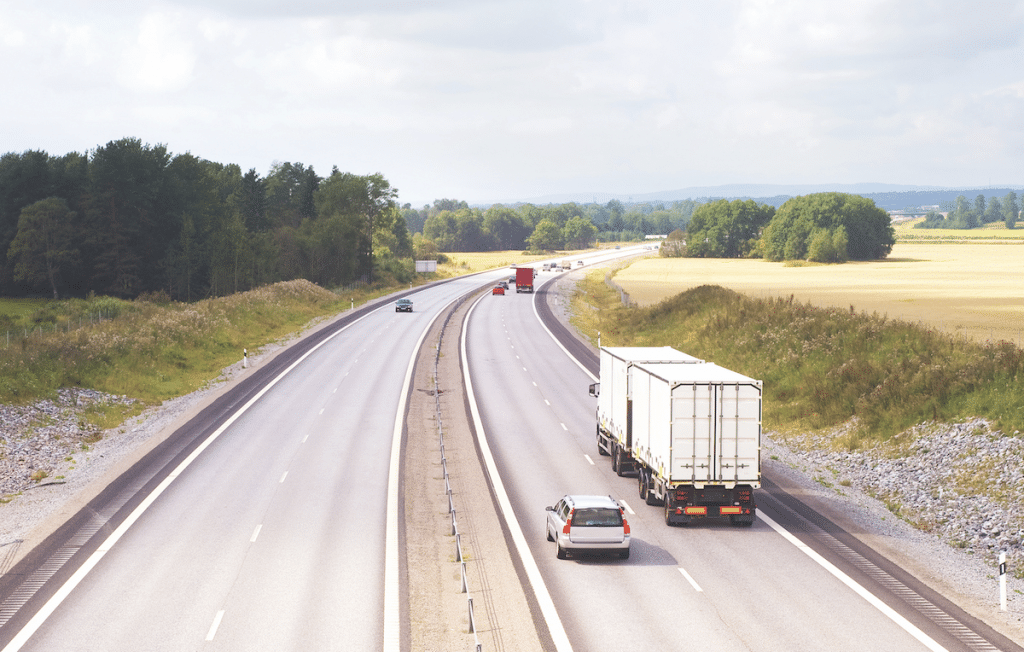 Norway has a substantial number of trailers to serve the infrastructure in the country according to Tom Haugvaldstad, Head of Road Freight, DHL Global Forwarding, Freight Norway.

“We are dependent on trailer transport as the rail network is limited and temporarily disrupted by tough weather during the winter season,” he said.

“The trailer market serves the oil and gas industry along the coast on a set base-to-base service from the west to the very north of Norway.

“The country imports most of what we consume, with the majority of export being raw materials, such as aluminium, fish, plastic and paper.

“There is a large proportion of heavy vehicle traffic based on loose trailers where there are good logistical systems for the pickup/delivery at ferry ports. Norway is outside of the EU and hence there is a need to custom clear goods in and out of the country. The majority of the freight forwarders are represented at the border crossings and the larger companies, like DHL, also have a fully digital custom solution where no hardcopy papers need to be handled.”

Norway, according to Haugvaldstad, is a country where most of the population, and business, is spread along more than 100,000km of the coastal line.

The majority of Norway’s export is fish and raw materials where DHL Freight is a major player in that space.

“When the oil and gas industry is doing well the base-to-base traffic is very busy, but the critical mass to have a profitable traffic is not big enough for many operators,” said Haugvaldstad. He added that there is constant consumption and the population pattern is stable. “Having better rail coverage in the country will be a necessity in the future. We will always have a large imbalance of empty trucks positioning themselves to serve the export needs for fish and raw materials in the middle/north part of the country where the population is low and a large part of the imports going to other destinations with a higher population. This drives the rates to an absolute minimum for some of the exports and most of the truck companies are not Norwegian.”

Norway is also reported to be a front runner in its sustainability efforts.

“The demand to deploy electric vehicles for all distribution with cities is ever increasing,” said Haugvaldstad. “We are seeing a high demand for B2C logistics, as a consequence of Covid-19, and this means even more deliveries within cities are being made to private homes. In addition, we take grate responsibility in controlling fair pay, cabotage rules, equipment and road authority controls.”

“The property, located outside Oslo, totals over 14,000 square metres of capacity,” she said. “The facility serves the central Eastern Norway cold-storage market. Similar to other properties that Lineage owns as a REIT, this facility is leased to a third-party operator.

“Additionally, in December 2020, Lineage announced the acquisition of Kloosterboer Norway facility. The facility totals 17,500 pallet positions and is strategically located outside of Oslo where it is well-positioned to serve both food producers and retailers.

“In January 2021, Lineage also announced the acquisition of Larvik, which consists of one net leased facility in proximity to Larvik Harbour, Norway’s second largest container port.

“Lineage hopes to continue to grow in greater Scandinavia and offer cold-storage services to customers in this critical geography.”

“After 39 acquisitions in 2020 alone, Lineage has clearly established itself around the world as the acquirer of choice to family owners,” said Collins. “Lineage has a deep understanding of the needs of each seller and strives to integrate the people into the company’s culture first, while also respecting the legacy of the businesses that it welcomes into the Lineage family.”

Norwegian trailer builder specifies TRIDEC
Vangs, based in Inderøy, Trøndelag – 100km from Trondheim – specialises in the manufacture of multipurpose bulk carriers and oversized carriers. These products are versatile, with the bulk carriers being able to carry general cargo as a return load. The oversize carriers can also carry general cargo which are important factors for reducing costs and emissions on long distance transport operations in Scandinavia.

TRIDEC provides solutions for individualists and develops manufacturer-independent steering systems and axle suspensions for diverse weather conditions and terrain types. There are currently over 50,000 TRIDEC systems on the world’s roads. TRIDEC currently employs around 160 members of staff in Son in the Netherlands where development, installation and sales are located and its production facility in Murtede-Cantanhede, Portugal.

Since 2008, the company is part of JOST, a leading global producer and supplier of safety-critical systems to the commercial vehicle industry with the brands JOST, ROCKINGER, TRIDEC, Edbro and Quicke. JOST employs more than 3,500 members of staff worldwide and has been listed on the Frankfurt Stock Exchange since 20 July 2017.

No two truck or trailer hitches are alike. Based on its many years of experience and diverse expertise, TRIDEC is able to offer tailored solutions for every task. Modular systems allow implementation on all types of trailer. The specialists at TRIDEC not only develop mechanically controlled steering systems, but also those controlled by hydraulic and electronic means. In doing so, they place great emphasis on long-term, cooperative collaborations with customers and users, ensuring that the perfect TRIDEC system can always be developed according to requirements.

The systems can be installed regardless of the axle or vehicle manufacturer. Hydraulic steering systems use cylinders to create a hydraulic connection between the clutch plate and the axles.

Alongside steering systems, TRIDEC also manufactures independent axle suspensions for double-deck and glass-transport trailers as well as for hydraulic suspensions and swinging axles.

TRIDEC axle suspensions increase the trailer capacity with regard to both volume and payload. Calculations from TRIDEC show that this solution can reduce transport movements. Reduced tyre wear and fuel consumption then result in further savings, meaning that TRIDEC systems contribute to a greater profit margin in the long term.

Vangs has enjoyed a long partnership with TRIDEC of more than 20 years.

“We have found that TRIDEC is a reliable partner for our products,” the company said. “Their product line matches what we need to source.”

These included Sweden, France, Belgium, Holland and Norway although the driving force behind the introduction of high productivity vehicles in Europe, according to Bruzsa, is not so much the productivity but rather the environmental benefits.

“They have very ambitious targets in terms of reducing the greenhouse gases of the transport sector and this applies to the individual countries in general,” he said. “Transport can have a major say in that and, as we’ve already demonstrated in Australia, high productivity vehicles can deliver significant benefits in this area by lowering emissions.”