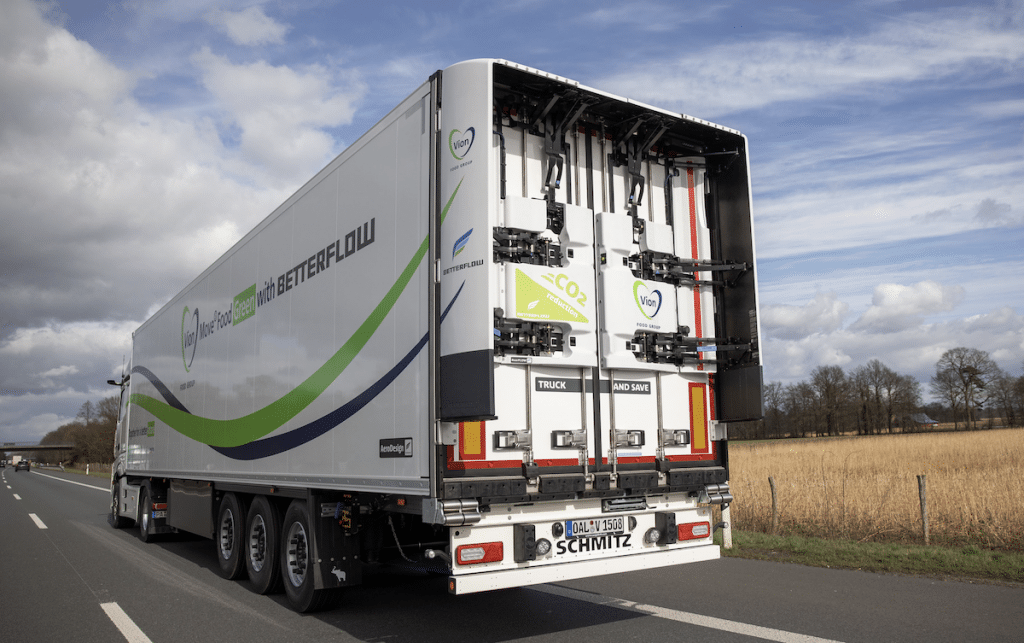 In the presence of representatives from Schmitz Cargobull, Mercedes-Benz Trucks and aerodesign specialist, Betterflow, the first optimised articulated vehicle was handed over to Vion in mid-March under the motto ‘Together for a better future’.

“This trailer concept reduces fuel consumption and CO2 emissions, and is supplemented by the aerodynamic components of the Betterflow system for enhanced sustainability in road freight transport.”

To optimise the vehicle even further, Vion’s other industry partners include the Aachen-based start-up Betterflow. The aerodesign specialists come from the aerospace industry and have set themselves the goal of optimising the air resistance of articulated vehicles. The Aachen engineers are adding three components to the trailer – an underbody membrane (LowFLOW), a spoiler on the bulkhead of the trailer (HighFLOW), and a rear wing system (RearFLOW), which opens automatically at a speed of 60 km/h and has been approved in the EU since last year.

With around 300 trailers in Germany and the Netherlands, each with an annual average mileage of 100,000 km, Vion should consume far more than half a million litres less diesel, and thus reduce CO2 emissions by around 1,500 tonnes.

“Anyone – like us at Vion – who wants to take responsibility for sustainable value creation along their entire supply chain cannot ignore the subject of mobility and logistics,” said Janßen.

“As a pioneer in the meat industry, we are thus taking the next logical step in the future-oriented supply of foodstuffs.”