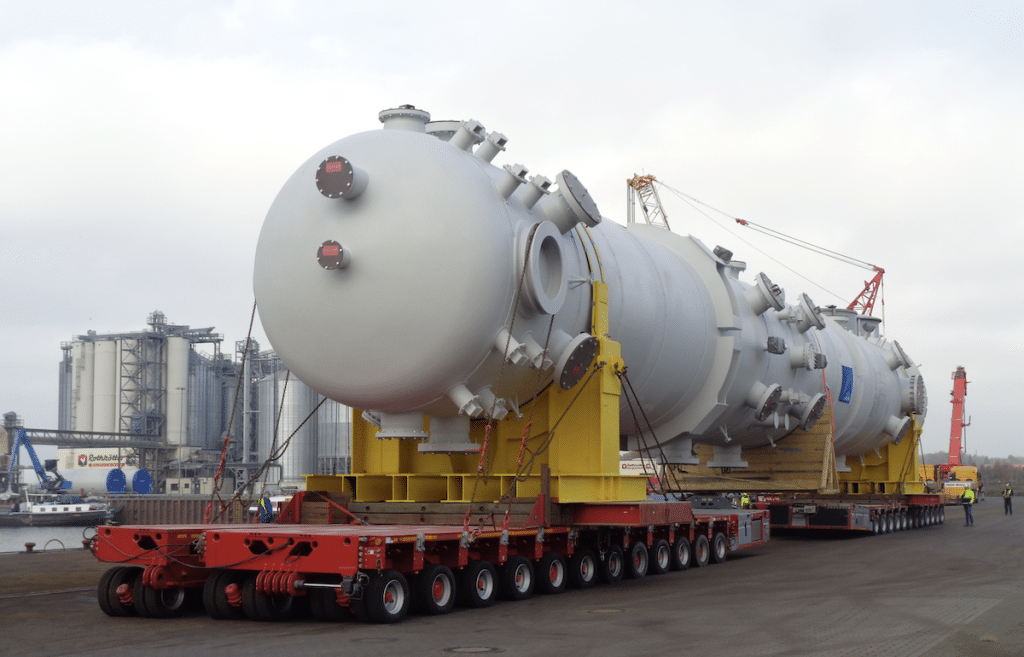 German freight forwarder, KAHL Group, used Goldhofer equipment to transport six huge heat exchangers from engineering works near the port of Haren on the River Ems to a cargo vessel destined for Russia.

The exchangers are for two gas liquefaction plants.

Over a period of several months, according to Goldhofer, the individual components had been transported from various production facilities to the Barlage company in Haren. There the components were assembled and the final touches made to the heat exchangers.

The KAHL Group was then tasked with the heavy haulage operation of moving the heat exchangers from the assembly plant to the quay, where two heavy-duty cranes (LR 1600) were waiting to lift the heat exchangers into the belly of the transport vessel.

Although the route was only about 800m long, the challenges were enormous due to the need to negotiate the confined spaces on the journey all the way round the harbor.

To move the 658-tonne cooler, the transport team relied on its trusted heavy-duty modules from the house of Goldhofer in a trailing unit configuration with 2x 12 PST/SL-E axle lines, picking up the giant cargo hydraulically without the use of a crane.

The equipment used for the operation was a P 1+1/2 split combination, i.e. with one module divided lengthwise and coupled parallel to a second full module.

The advantage of this combination, according to the OEM, is that it offers appreciably better stability than a single-width transporter on the one hand and requires less space for manoeuvring than a double-width P 1+1 combination on the other.

“Each 12-axle unit was powered by a high-performance 490 hp Powerpack,” said Goldhofer.

“With the 658-tonne load lashed onto the two one-and-a-half width self-propelled transporter combinations, it was quite a feat to negotiate the three 90° bends with a total train length of more than 50 m and a load width of 6.43m.

“With electronic steering on all axles and travel speed reduced to snail’s pace, the experts successfully guided the train through all the narrow sections of the route.

“Handling such transport operations without a turntable (which has the advantage of much greater tilt stability) calls for meticulous preparatory work and lots of experience, something that the tried and tested team at KAHL and PIEPER demonstrate on a daily basis.

“And so, in spite of all the difficulties, the huge cargo reached its destination in good time, and the transport vessel was able to sail on schedule.”

Earlier this year, Goldhofer featured in a cover story.