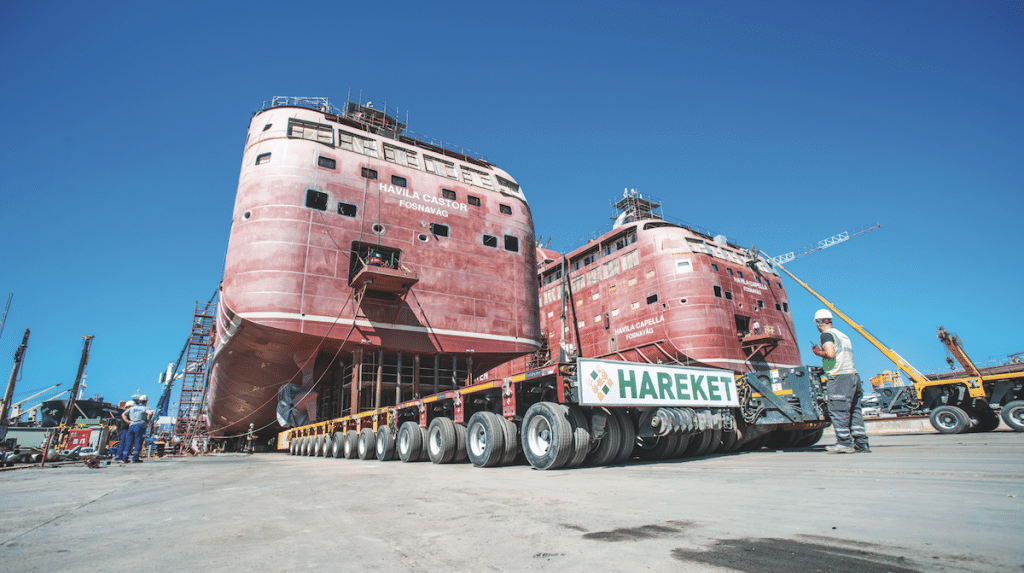 A mega transporter for the most demanding of tasks.

Transport and logistics operators worldwide rely on Goldhofer’s vehicles and technology to manage their heavy haulage tasks. These impressive builds can be seen in Asia, all of the Americas, Europe, Africa and elsewhere.

Member of the Board Transport Technology, Rainer Auerbacher, points to a number of reasons as why businesses all over the world place their trust in Goldhofer. For one, the OEM always takes into account the differences in national and regional road transport regulations and includes them in the basic product design process.

In addition to the economic benefits of combining high axle loads with low deadweight, he explains that the company’s product design engineers focus on producing vehicles offering maximum flexibility that comply with a wide range of national requirements as standard.

Instead of having to use different vehicles from one country to the next and wasting time and money on transloading operations, Goldhofer transport solutions allow these companies to handle the job with just one vehicle for maximum efficiency.

“For such operations, consideration must be given to such differences in regulations as the European limits on height and weight or the varying track width limits in place in some US states and they must be catered for either in the standard model or with special versions,” Auerbacher said. “This is important because sometimes just a few centimetres in running height or kilograms of deadweight are decisive for avoiding lengthy detours.”

While 2020 did not see a significant increase in demand for heavy duty modules, according to Auerbacher, one of the most impressive operations involving Goldhofer gear was the groundbreaking feat achieved in Turkey by the Hareket company in moving two passenger ships 124m long, 22m wide and 35m high.

“With a weight of 6,200 tonnes each, the two ships being built at that Yalova-Tersan shipyard are the heaviest passenger vehicles ever built in Turkey,” he said. “They are to be fitted out in a floating dock and were moved there using a total of 200 axle lines consisting of Goldhofer self-propelled units and heavy-duty modules.”

With its Transport Technology and Airport Technology divisions, Goldhofer manufactures high performance vehicles for the whole world at its German headquarters in Memmingen.

“We also have production facilities in the US, India and Ukraine,” said Auerbacher. “In addition, we have sales and service points in Memmingen and Ostfildern in Germany as well as in the US, Great Britain, India and the United Arab Emirates (UAE). We are committed to increasing the number of our facilities around the world so that we can be as close to our customers as possible.”

Each year Goldhofer invests millions of dollars into its R&D budget to further develop its products and to establish new technologies in the market.

“In doing so, we have established a strong framework for the successful development of our products and human resources in Memmingen,” said Auerbacher. “We are also continuing to internationalise with capital spending projects in the UK, Ukraine, India and the US.”

Now, to learn a little more about Auerbacher’s journey in the industry.

“After university, I started off as Sales Manager for Latin America,” he said. “In addition to a passion for the culture and people of Latin America, I also developed a passion for heavy haulage. I had always been fascinated by programs on Discovery Channel about large machines, but it was even more exciting to be able to play a role in major transport operations around the world with the impressive vehicles produced in Memmingen. I found it fascinating to sit down with our customers and work out how a seemingly immobile cargo can travel along an unimaginable route and how Goldhofer’s vehicles can make that possible. This still fascinates me today, and I still enjoy working with customers to tackle the challenges they face and, following a successful mission, to join them in a toast to our ability to act as a team to meet the challenge.”

His passion for heavy haulage and overcoming new challenges has seen Goldhofer grow and develop new products to keep pace with the world.

“As can be seen from the history of Goldhofer, the products we develop make us the leader in terms of quality and technology in our industry,” he said. “This is not an end in itself; it is an expression of our focus on our customers, because they benefit in every respect – technically, economically and also ecologically. As a result, we have grown over the years from a family business to a foundation whose products are in use on all six continents. In recent years, for example, we have set up sales and service centres at critical locations worldwide, and in North America – with Fliteline and Goldhofer Inc. – we have established on-site vehicle repair and overhaul capacities so as to reduce costs and downtimes for our customers.

Guided by a proud legacy and an eye for industry developments, Auerbacher is following several trends and adapting his team’s business strategies accordingly.

“In the case of heavy haulage vehicles in particular, there is a continuing trend towards low dead weights in combination with high axle loads and low loading heights,” he said. “Similarly, in the wind power industry, the wind turbine blades are becoming longer and longer and the tower modules bigger and bigger. When it comes to transporting such components to windy and sometimes inaccessible locations, Goldhofer is practically the first port of call. This is due to our very extensive portfolio, which ranges from suitable bridges to tower adapters and blade transporters and lifters. Here again the underlying principle is to develop vehicles that are as versatile as possible so that they can be used for a variety of operations. There is also growing demand for worry-free packages including such aspects as load security as well as software tools offering effective axle-load, stability and bend analysis.

“Digitalisation is another issue that is taking on more and more importance. It is also evident that the operators of today’s heavy-duty vehicles are increasingly becoming the focus of attention, and that more and more emphasis is being placed on user-friendly solutions and the safety of all concerned. That is something we are happy to support and implement with our developments for the benefit of all.”

“With these three- to five-axle semi-trailers, we are moving into the high-volume market segment,” said Auerbacher. “The combination of high product quality and attractive conditions will help us reach new customers in the transport and forwarding industry as well as rental operations.”

In the Goldhofer product segment of self-propelled heavy-duty modules, the OEM we has released several innovations.

“Our all-rounder modules in the PST/SL-E series, for example, now not only offer more tractive force per axle, they also feature a sturdier frame,” said Auerbacher. “Other innovative developments include our PST with freewheel mode (»SPEEDRIVE«) and the »ADDRIVE« 2.0, which can be used as both a self-propelled and a towed unit.

»SPEEDRIVE« heavy-duty modules are equipped with switchable driven axles. This means they can be utilised as towed modules at higher speeds of up to 80km/h (taking into account national regulations). With the drive unit activated, the load can be positioned at the destination with millimetre precision without a tractor unit and without time-consuming and costly reloading. In addition, the »SPEEDRIVE« option enables you to tow the vehicle to the job site on its own axles. »ADDRIVE« 2.0 supports the tractor unit up to a maximum speed of 50km/h. The driven axles are then automatically disengaged. Moreover, »ADDRIVE« 2.0 can be engaged while driving. The benefit: With »ADDRIVE«, transloading the freight from a road transport vehicle to an off-road vehicle is no longer necessary.”

“At Goldhofer we face these challenges every day,” said Auerbacher. “However, the Covid-19 pandemic has added to these pressures since the beginning of 2020. Over the past weeks and months, we have naturally held numerous talks with employees, customers and suppliers. The solidarity that has been shown and the commitment to pull together as we move along the stony road ahead are a source of great pleasure and strength for our resolve.

“Our focus in these challenging times is clear, and it is very much in keeping with the traditional Goldhofer values: customer orientation, quality, innovation, reliability and the spirit of partnership. On this basis, our employees and I myself are convinced that we will be able to add many more positive chapters to Goldhofer’s 300-year success story.”

A timeline of key milestones