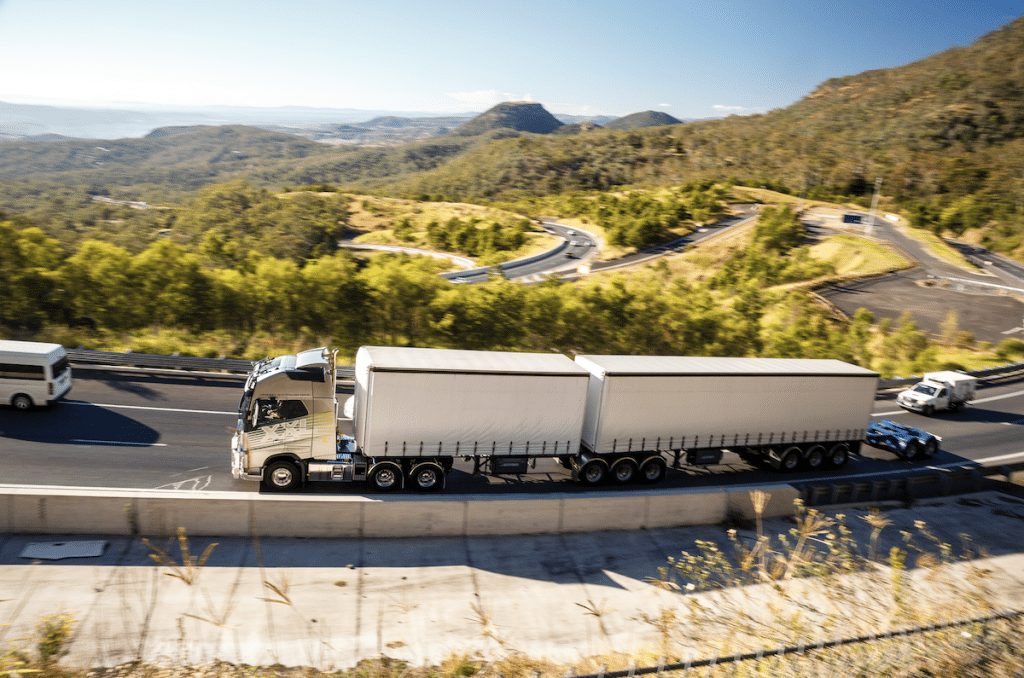 The evaluation took place on an 8,000km return trip from Brisbane to Darwin.

“We tried the converter dolly in various combinations, pulled by a Volvo FH XXL,” said Manton.

“It was first towed behind a B-double, then an A-double, then a Type 2 BAB quad, and finally we swapped the combination around to a Type 2 ABB quad to move the dolly further away from the prime mover.”

According to Manton, the dynamic performance of the trailers and rigid drawbar dolly, while in the A-double combination, was very similar to a B-double combination meaning it was very stable, particularly during the dreaded task of a road train driver having to drop the left wheels off the blacktop to make room for an oncoming vehicle.

“The dolly gave no kickback force whatsoever through the prime mover over big bumps,” said Manton. “It gave us drivers a lot more confidence regarding stability, tracking and overall trailer control in the various combinations.

“When we had it in the BAB quad set up, again, the handling of that combination was better than a normal type 2 triple combination – there wasn’t as much sway from side to side, giving a lot more control when having to give way to wide loads or on narrow bitumen,” he said.

“With a normal converter dolly, there are pivot points on the drawbar so you tend to get a bit of play there,” he said. “This new dolly removes all of that because it has a solid drawbar – the handling of it is just incredible.”

It’s an opinion shared by others in the industry, including AJM Transport Group General Manager, Dennis Roohan, who was most impressed by the reduced tyre wear when the company trialled the new dolly in three different configurations – ABB quad, BAB quad and BBA quad – on a similar route between Brisbane and Darwin.

“The drivers loved it and didn’t want to give it back, which was good, because it suffered a bit of negativity when it first came in,” said Roohan.

“It’s not something we’ve seen a lot of on the east coast. Overall, the performance was far superior to our current dollies, particularly under brakes and tyre wear, which is the thing I looked at most.”

Roohan described the tyre wear as “brilliant” compared to what the company currently experiences with traditional dollies.

“When we got the dolly, it had already travelled about 30,000km and the tyres looked brand new. On our current dollies, at 30,000km the tyres are already about a third worn.”

Asked whether he believed we’ll start seeing many more of these dollies on our roads in the near future, Roohan said, “It’s going to be an education process – until you talk to someone who has got it and has tried it.

“I know a Newcastle operator who has a couple of these dollies and uses them with his A-doubles. I’ve looked at his tyre wear and it’s outstanding – concept proved.

“Education is the key moving forward to convert the traditionalists.”

In other news, Australia Post introduced a new A-double into its linehaul operations.