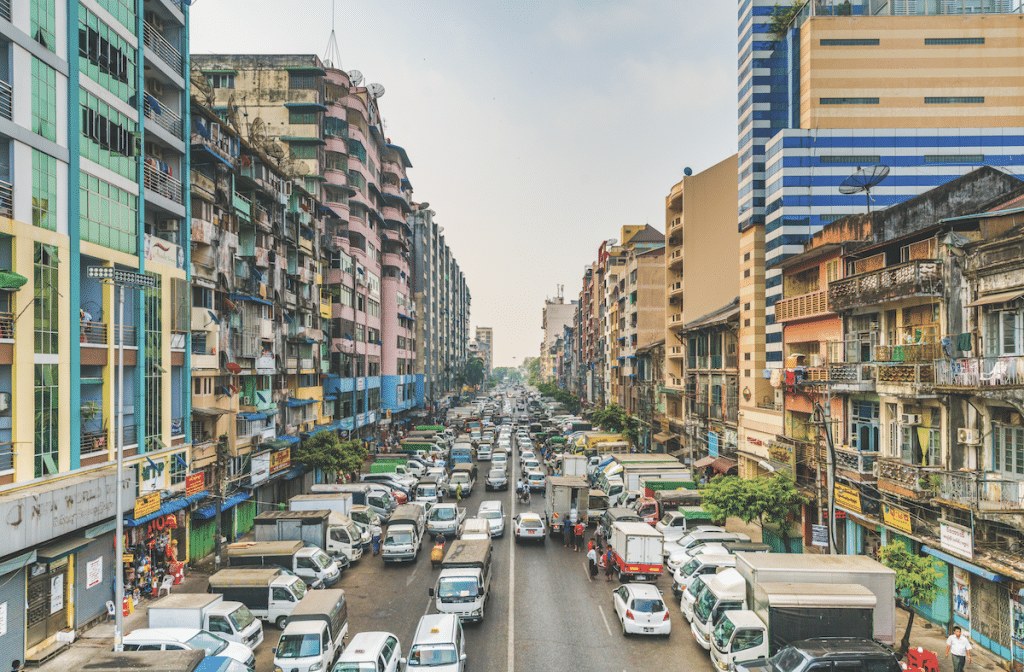 The Observatory of Economic Complexity has listed a series of international trade data about Myanmar. In 2018, the country was ranked the top 71 economy in the world based on Gross Domestic Product (GDP), number 72 in total exports, 69 in total imports and 122nd most complex economy.

World Bank data in 2019 revealed Myanmar was worth approx. $76.09 billion USD, representing 0.006 per cent of the world economy.

Myanmar mostly exports to Thailand, China, Japan, Germany and the US and imports mostly from China, Thailand, Singapore, Indonesia and India.

Transport and logistics company, DHL, has a well-established presence in Myanmar through three of its major business divisions, according to Christoph Beier, DHL Global Forwarding Country Manager.

“DHL Express, which offers express airfreight services across 220 countries and territories, DHL Global Forwarding, the division that I run that mainly handles bulk shipments via air, ocean, road and rail freight and DHL Supply Chain, the contract logistics arm that takes care of warehousing and local transportation of goods within the country,” he said.

Similar to most of the other countries where DHL Global Forwarding is present, cross-border trucking, Beier explained, is one of the key services that the company offers.

“As a leader in the forwarding business with a presence in more than 190 countries and territories, our key activities also include airfreight, ocean freight, customs clearance and warehousing,” he said. “Myanmar has seen tremendous economic progress in the past two decades, growing its GDP by almost 10 times. It has also seen its exports grow correspondingly by over tenfold since 2000.”

“As a global logistics leader with a comprehensive portfolio of logistics services, we have helped local businesses, especially those in Myanmar’s top export sectors – oil and gas, fashion and apparels and agriculture – tap the global marketplace with innovative solutions to meet their specific supply chain needs,” said Beier. Myanmar and Japan discussed the final implementation of the National Logistics Master Plan, aided by the Japan International Cooperation Agency (JICA) to support the development of Myanmar’s logistics sector, the Ministry of Transport and Communications reported in August 2020.

A coordination meeting on the final discussion of the National Logistics Master Plan’s report was held at the Transport and Communications Ministry’s office in Nay Pyi Taw on 17 August 2020.
Deputy Minister for Transport and Communications delivered a speech at the meeting. Later, the Senior Representative from JICA in Myanmar embassy explained the importance of logistics system which supports socio-economic development. The master plan had been drafted by relevant organisations from the JICA Study Team.

The National Logistics Master Plan was drafted in July 2016 with the JICA’s assistance. It was also led by the Ministry of Transport and Communications.

Myanmar’s Deputy Minister of Transport and Communications acted as the chairman for implementation of National Logistic Master Plan and Joint Coordinating Committee-JCC was formed with experts from JICA and the representatives from the Ministry of Construction and other relevant ministries.
The logistics sector in Myanmar is expected to triple by 2030 according to national logistics master plan drafted by Japan.

Authorities built eight new wharfs in Yangon within three-year time and the cargo handling process is being carried out with 41 wharfs, according to Myanma Port Authority (MPA).

The Myanmar coast is approx. 2,230km with nine ports built along the coastal area. Yangon port is a major port and handling hub with more than 90 per cent of international maritime trade.

In terms of recent transport and logistics trends in Myanmar, Beier turns his attention to the India-Myanmar-Thailand (IMT) highway project which is expected to boost trade in the ASEAN-India free trade area via road freight.

“With Myanmar strategically located between India and Southeast Asia, the country will benefit as a bridge between India and its ASEAN trading partners,” he said. “We expect to see an increased level of interest in cross-border trucking between them when the project is completed.”

The IMT project is only part of the road development works happening in Myanmar. “Domestically, the country will soon embark on the development of the 64km Bago–Kyaikto expressway with the support of the Asian Development Bank,” said Beier. “The expressway will ensure more efficient and the safer movement of people and goods along the Greater Mekong sub-region, boosting Myanmar’s trade with countries along the economic corridor.

“Both of these projects are also expected to benefit Yangon exporters, who are currently trucking goods to Bangkok, even pre-Covid, to tap into the Thai capital’s airfreight capacity and access to international markets.

“The country’s National Logistics Master Plan, which aims to develop Myanmar’s logistics sector and forecasts a threefold growth in the industry by 2030, is now in its last phase.

“The increase in mobile phone usage and uptake of digital payment applications, especially among the younger generation, as well as the enhancement of the local logistics infrastructure, will be key driving factors in the growth of Myanmar’s promising e-commerce market.”

Surprisingly, the Covid-19 pandemic, according to DHL, has not affected its operations in the country.

“We were immediately able to switch to work from home arrangements for the safety of our employees,” said Beier. “Our primary focus from the start of the pandemic has been, and still is, to ensure that all our employees and their families are safe and healthy. We have also been committed to minimising any service disruptions to keep our customers’ supply chains running.”

Looking at the country’s manufacturing, however, is a different story in regards to negative pandemic impact.

The IHS Markit Myanmar Manufacturing PMI plunged to 30.6 in October 2020 from 35.9 a month earlier.

This was the second-lowest reading on record as the economic fallout from the Covid-19 crisis persisted, with the government putting many regions in tightening restrictions. Output, new orders and purchases all contracted at record rates. Also, job shedding continued after workers returned to their hometowns. In line with record falls in new work, purchasing operations were scaled back. The volume of inputs fell at the fastest rate on record, while stocks of purchases contracted at the joint-second fastest rate in the survey history. Vendor performance weakened for the second straight month. On the price front, inflationary pressures arose with cost burdens increasing modestly.

Factory gate prices continued to fall in order to stimulate sales. Looking ahead, sentiment remained positive but it was weak in the historical context.

There is optimism in the air despite Covid-19. Consumer Industry Leader of Deloitte Southweast Asia, Pua Wee Meng, characterised the Myanmar consumer as dynamic and fast-evolving. Based on surveys conducted in Yangon, Mandalay and Mawlamyine in 2019, there was evidence of decreasing price sensitivity and greater demand for discretionary spending among other insights.

“The Myanmar consumer continues to demonstrate an openness to new products and services, even as they remain value-conscious in their purchasing decisions,” said Meng. “Although this represents the opportunity for companies to introduce new value propositions to the market, the flip side is that investments will need to be made to secure long-term brand loyalty and ensure recall by the consumer.”

The economy, based on Deloitte’s findings, reveal the country’s economy is indeed at a turning point. While economic expansion may have stagnated following years of rapid growth, there are prospects in the medium term that remain promising.

Specifically, heavy investments in infrastructure projects are expected to lift domestic consumption and drive GDP. Also, the liberalisation of Myanmar’s financial services sector is expected to increase the presence of foreign players in the retail banking and insurance landscape and stimulate investment and growth in nascent industries such as retail and digital commerce.

Policy reforms following the National League for Democracy’s 2020 election win is expected to drive greater integration between Myanmar and its regional peers in the ASEAN Economic community. Infrastructure tops the list for key policy reform which is in need of dire investment. Estimates, according to Deloitte, suggest that it could require as much as 120 billion USD until 2030. To that end, the government has developed the Myanmar Sustainable Development Plan (MSDP), which lays out its vision to bridge the infrastructure gap. In line with this, it has also introduced a project bank, a centralised and publicly accessible database that will enable the government to coordinate ministries and departments and prioritise proposals which are in line with the MSDP.

As for economic recovery, Deloitte’s data projects an uplift on the horizon. Myanmar’s economic growth rate experienced some stagnation at 6.8 per cent in 2018, and this is expected to fall to 6.6 per cent in 2019, falling short of the World Bank’s estimates of 7-8 per cent.

This dip is reflected in the decrease in the percentage of Deloitte’s survey respondents expressing an optimistic sentiment, which fell from 66 per cent in 2018 to 57 per cent in 2019.

Myanmar, according to Deloitte, needs to tackle a multitude of socioeconomic and political issues to achieve and maintain its near-term growth momentum. Currently, the economy is struggling with trade and fiscal deficits, as well as high inflation rates due to volatility in fuel and food prices. The lack of infrastructure also continues to pose operational risks for potential investors, in addition to the mounting international pressure stemming from the ongoing border conflict.

Still, the prospects are promising: the government’s recent efforts to restructure its economy with the launch of the MSDP and monetary policy reforms ahead signal a strategic shift towards a more intensified focus on attracting foreign investment and stimulating economic growth.

For instance, the Myanmar Companies Law enabled foreign investors to acquire a stake of up to 35 per cent in local companies, as well as 100 per cent ownership in retail and wholesale companies. Given these developments, the retail and wholesale segment is expected to drive GDP growth within the services sector, which contributed to 42 per cent of GDP in 2018, and is expected to grow at a rate of 8.3 per cent in 2019.

Myanmar also seems poised to become a regional, low-cost production powerhouse, with a growing manufacturing sector that is now worth 11 billion USD, second only to its oil and gas and power sectors, which accounted for the majority of permitted foreign investment at 53.9 per cent.