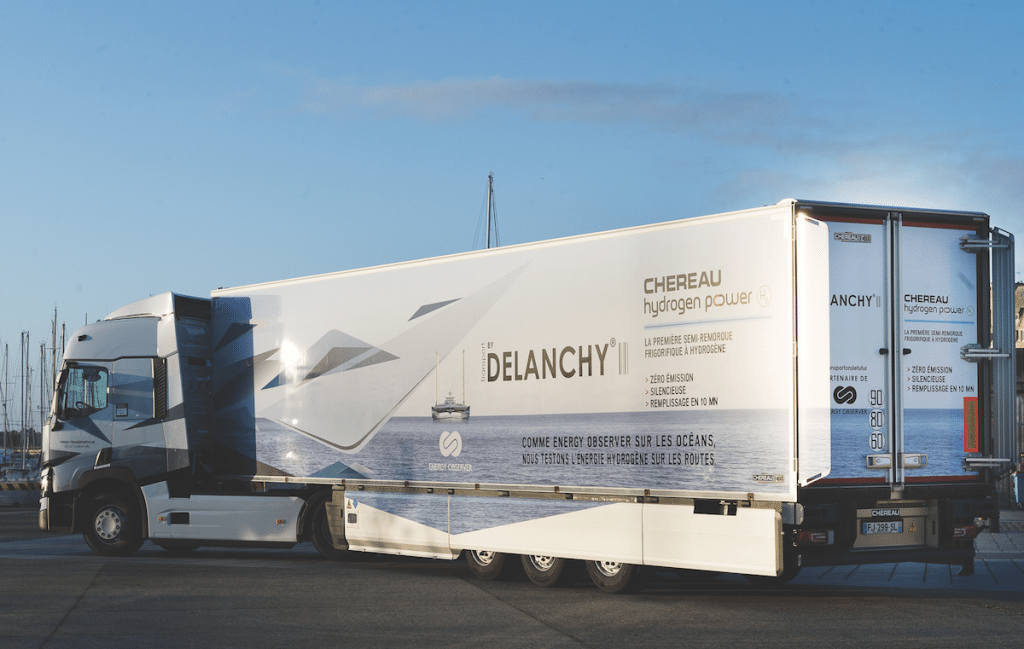 The ROAD collaborative project, which enabled CHEREAU to produce its first hydrogen-powered semi-trailer, was finally realised at the Solutrans exhibition in November 2019. This project highlighted numerous technologies that were leveraged to develop ‘From ROAD to REAL’ – an ambitious program to take ROAD’s tech to the next level.

The specialist manufacturer unveiled four new product ranges at Solutrans, including: INOGAM EVO, an overhaul project of the CHEREAU core range (which allows operators to save nearly 430kg of payload for the market reference refrigerated semi-trailer); CHEREAU Next, the first multiplexed refrigerated semi-trailer which benefits from the INOGAM EVO program and which can be coupled to all tractors on the market thanks to a new module.

The company has also developed the CHEREAU Performance range using the VIP ‘Vacuum Insulated Panels’ technology, a breakthrough innovation based on vacuum (reportedly the best insulator on the market) and which makes it possible to achieve a record level of insulation performance with a K coefficient of 0.27.

It takes the refrigerated semi-trailer into a new mode of use that is even more sustainable and more efficient, while limiting the energy requirement for a better respect of the environment. Reinforced by the ROAD tests which have shown that the Total Cost of Ownership (TCO) of this technology proves to be completely realistic and relevant for a decarbonated transport activity, CHEREAU is now launching the industrialisation of hydrogen through the CHEREAU Hydrogen Power H2 range.

CHEREAU plans to produce 10 vehicles by 2023 and to switch nearly 25 per cent of its production to hydrogen vehicles within the next 10 years. To achieve this, the bodybuilder has surrounded itself with various partners.

In early 2020, CHEREAU signed a three-year partnership as an official supporter of Energy Observer, the first hydrogen boat around the world.

A concrete and meaningful partnership, CHEREAU is clearly committed to the industrialisation and marketing of hydrogen-powered refrigerated vehicles. Its strategy goes further, as it is also committed to promoting the hydrogen industry in France through the active promotion of this clean energy source.

On the industrial side, CHEREAU is making progress in setting up its hydrogen vehicle production structure via a technical partnership with H2SYS and is continuing operational tests via a partnership with the Delanchy transport group.

For Damien Destremau, Chairman of The Reefer Group and of CHEREAU: “Within 10 years, 25 per cent of the production of our company will be hydrogen vehicles, a proportion that could rapidly increase depending on the speed of deployment of the hydrogen supply network. “This project is therefore part of a global environmental approach, which is also found on another scale on our vehicles,” he said. “We are working in parallel on the energy frugality of CHEREAU vehicles with VIP insulation which allows a 25 per cent reduction in the operating time of the refrigeration units. Weight reduction is another area of ongoing progress. All of these projects represent major investments, essential to ensure that the turnaround in the energy transition is taken as quickly as possible. This is a clear choice by our company and we are convinced that our customers will understand, support and encourage it.”

CHEREAU has also recently launched the CHEREAU H2ColdChain project, a bold program that aims to provide transporters with hydrogen refrigerated semi-trailers and, as soon as possible, their tractors, as well as hydrogen production and refilling points.

To compensate for the absence of a station and the limited autonomy of the first hydrogen trucks and to guarantee a maximum decarbonated hydrogen, H2Coldchain proposes to integrate a production and distribution station on each industrial site of the cold logistics chain.

Due to photovoltaic panels on roofs or shades, an electrolyser and a storage tank, it is possible to produce a significant part of green hydrogen locally.

A single transport company can hardly achieve the energy switch alone. H2Coldchain aims to gather all the players of the cold chain: Agri-food industry, transport companies and supermarkets in order to co-create and to go from diesel to H2 refrigerated cold chain.

“We are already engaged in the energy transition, but this is not enough,” said Destremau. “We still need to accelerate and federate, because if we want the world to change, more of us need to get involved. In mid-April, in response to the call for expressions of interest issued by the French government, we proposed a hydrogen cold chain logistics project called H2Coldchain. This project has received many letters of support. So, I am also launching an appeal: agri-food manufacturers, temperature-controlled transporters, distributors, join us. Let’s totally decarbonise our industry by 2030, it’s possible, the technologies are ready.”