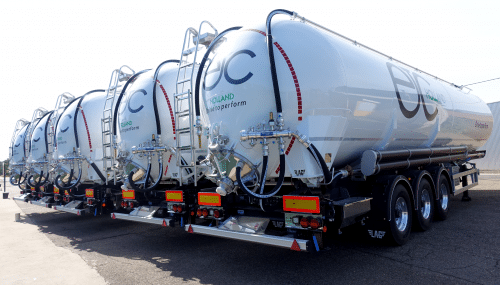 The first five large volume silo tankers of the series, according to LAG, are currently being delivered.

While some of the new trailers will replace used equipment in the fleet, the remainder of the order will reportedly be used to bolster the business' local operations and penetrate new markets.

LAG Trailers supplies the Dutch carrier with a very light tipping silo which weighs 6750kg. The silo tanker has a volume of 63 cubic metres and also features a tipping unit.

“The climate is changing and customers are asking for it more and more often,” he said.

Further specifications place particular emphasis on safety and hygiene according to LAG.

“In order to improve the user-friendliness and safety of the driver, the vehicle's pressure outlet is located at the bottom, while the top side is fully coated with an anti-slip layer,” said LAG.

In addition to expanding its fleet, ETC Holland also recently purchased a new lot of land which will soon house the company's headquarters.

“ETC follows an ambitious but realistic growth plan,” said Smits. “We want to grow on a foundation of quality. The new silo trailers are necessary to carry out and expand the daily operations. Our new headquarters will be the logical next step that will clearly put ETC Holland on the map.”