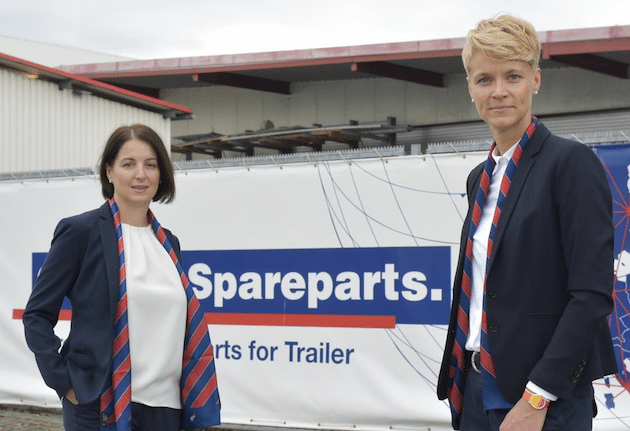 After completing her studies in industrial engineering, specialising in mechanical engineering, Aznar began working as a technical engineer at Schmitz Cargobull’s Spanish plant in Zaragoza in 2001. Here, the Spanish born engineer helped to set up the production site. In the following 12 years, Aznar worked in various departments and in 2014 transferred within the group to Schmitz Cargobull’s Business Development department in the After Sales division in Altenberge. As Head of Spare Parts Order Management, she worked on standardising sales processes and systems. Outside of work, the mother of two is an avid tennis and paddle tennis player.

Sprey began her career at Schmitz Cargobull in 2003 with a dual course of studies in business administration. She completed her studies in 2007 at the University of Applied Sciences in Münster. She then started as a logistics planner in the product development process at the Vreden plant. Subsequently, she worked as a group leader in the Schmitz Cargobull production system and later as a strategic purchaser. Here, she played a decisive role in the introduction of the 'Cargobuy' purchasing platform. In 2017, Sprey transferred to Cargobull Parts & Services as the Head of Supply Chain Management. In addition to her new function as Managing Director, Britta Sprey will also take on the “After Sales” product line management for Service Net, Assist Center and Spare Parts. In her free time, Britta Sprey enjoys running and hiking.

“We are delighted that we have been able to gain such a powerful and dedicated duo, Patricia Aznar and Britta Sprey, from our own ranks for the responsible Managing Director positions,” said Billich. “With their profound expertise and company knowledge, they will continue to build on and expand Cargobull Parts & Services’ many years of success.”

In June, Schmitz Cargobull named a new leader for its Telematics subsidiary.