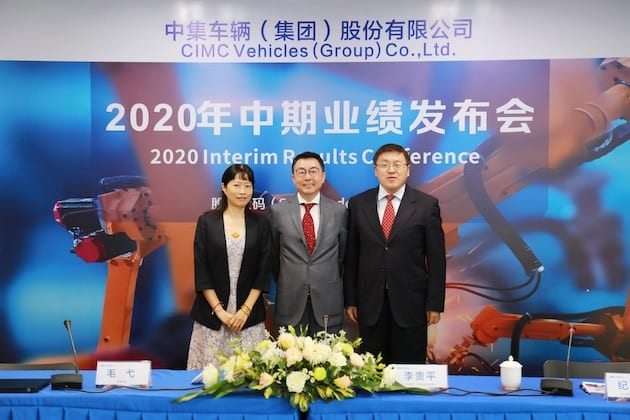 The group's global development in the first half of 2020 has been further impacted by the Covid-19 pandemic and the Sino-US trade dispute leading to additional tariffs.

“New national standards for the second-generation semi-trailers came into force in 2020,” CIMC Vehicles said in a statement. “The Chinese government has proactively promulgated a special remediation inspection on illegally modified trucks, and hence will promote the comprehensive replacement of second-generation semi-trailers. With the resumption of production, the urban dump trucks and cement mixer trucks business that the Group has been operating will benefit from China's strong infrastructure investments and the Chinese government’s vigorous promotion of 'environmental protection' as well as crackdown on 'overload vehicles'. Moreover, in the wake of Covid-19, the surge in demand for fresh food deliveries, as well as low-temperature transport of pharmaceutical supplies and biological products have stimulated the refrigerated van market.”

Revenue generated during the first half of 2020 was 11.2 billion RMB, while profit for the period totalled 696.6 million RMB. As at 30 June 2020, the Group maintained a healthy financial position with total assets and net assets amounting to 20.9 billion RMB and 10.0 billion RMB, respectively.

While return on equity was 6.9 per cent in the first half of 2020. The cash inflows from operating activities was 1.1 billion RMB, representing a year-on-year increase of 25.7 per cent.

During the period, the group sold a total of 51,056 units semi-trailers worldwide. A total of 24,580 sets of truck bodies for urban dump trucks and cement mixers and 2,345 refrigerated van truck bodies were sold in China. Revenue from the global sales of semi-trailers and specialty vehicle parts and from the components business amounted to 758.4 million RMB.

“As a leading global semi-trailer manufacturer, the group is directly affected by macro-economic conditions as well as fluctuations in demand from China, North America and Europe – the three major semi-trailer markets,” said CIMC Vehicles. “The Group duly lowered its expectations at the beginning of 2020. Although the sudden outbreak of Covid-19 has had an inestimable impact on the global economy, the group’s global semi-trailer business has performed according to expectations, owing to a solid foundation built by the Group over the years as part of its 'Global Operation' initiative, as well as the benefit of 'Local Manufacturing' that its subsidiaries possess.”

In Q1 2020, CIMC employed an efficient remote office model and observed scientific management in controlling the resumption of work and production activities.

“The group actively implemented core measures to upgrade its 'Product Module', and continued to upgrade and improve 'Light Tower' Plants in China, and hence boosted the sales of tank trailers significantly in China,” said CIMC Vehicles. “Revenue from the semi-trailer business in China increased to 3.0 billion RMB, a significant year-on-year increase of 31.3 per cent, and the gross profit margin increased to 13.7 per cent, a year-on-year increase of 2.8 percentage points.”

The group produced and delivered a total of more than 10,000 semi-trailers during 1H 2020 across North America.

“The average gross profit margin of its three principal products has reached 13.0 per cent,” said CIMC Vehicles. “The localisation of production has accelerated, with the chassis trailer production lines of CIE Manufacturing, located in California and Virginia, already commencing operation. As for the new CRTI refrigerated trailer plant located in Indiana, it will be completed in 2020 as planned.”

In Europe, Belgium-based LAG reportedly secured a solid number of orders in Q1 2020 prior to the Covid-19 outbreak. LAG's deliveries and sales were impacted to some extent due to work and production disruptions in Q2 2020.

Meanwhile, SDC produced and delivered more than 1,500 semi-trailers and completed production line upgrades for its assembly plant in Mansfield, UK.

The group's sales performance of truck bodies for special vehicles has generally remained stable during 1H 2020.

“As the epidemic was brought under control, the group launched intelligently manufactured and intelligent cement mixer trucks, while maintaining a leading position in the Chinese market,” said CIMC Vehicles. “For the urban dump truck body business, the supply chains of certain tractor manufacturer partners in China were impacted in the first quarter, resulting in a shortage of truck chassis. Separately, the industry-leading automated coating production line located in the Luoyang plant commenced operation, representing a significant breakthrough in the upgrade of production lines for truck bodies of specialty vehicles. The production line will significantly improve the coating of products as well as lead towards the automation and rise in intelligence of the coating system.”

“It is worth mentioning that Shandong CIMC actively carried out new retail activities during the outbreak, thus securing sufficient orders and increasing its gross profit margin. The gross profit margin in the first half of 2020 increased to 23.0 per cent, representing an increase of 5.9 percentage points compared with the same period of last year,” said CIMC Vehicles.

The group is committed to expanding its manufacturing plants engaged in the production of bodies for refrigerated van trucks.

It also accelerating development of new-generation product modules and production technologies, upgrading semi-trailers in China by capitalising on new marketing and retail channels and improving sales of second-generation trailers.

“Entering the second half of 2020, the group will more actively promote localised manufacturing of refrigerated trailers and chassis trailers in North America,” said CIMC Vehicles. “The group will also seek to mitigate the epidemic’s impact, as well as keep its plants in operation through such major approaches as active investment in digital modelling design, upgrading of 'Light Tower' Plants and investment in a global supply chain management system based on EPS (electronic procurement system) among semi-trailer manufacturers in North America and Europe.”