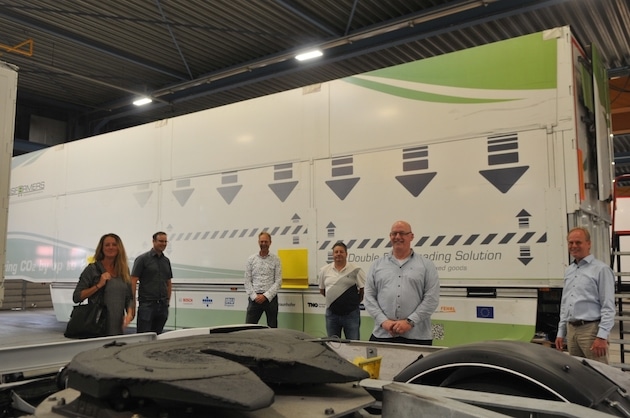 “The starting point of the Aeroflex project is to work with larger and heavier, but also more versatile combinations in order to achieve more efficient road transport in Europe,” said Aeroflex project lead, Ben Kraaijenhagen.

“This project also explicitly looks at the intermodal possibilities of the developed vehicles,” he said.

“In the first place, the trailer is now also suitable for transport on the train.

“Furthermore, there is a coupling at the rear under the chassis, with which a dolly can be coupled, which in turn couples with a second trailer. This creates an A-double, twin trailer or Van Eck Super Eco Combi, of two trailers. This is in line with the goals of Aeroflex and with developments that play a role elsewhere in European road transport.”

Bertens said that more aerodynamic aids have been fitted on the side and rear to further reduce the tractor's fuel consumption.

“'Cargo Cams' have also been installed at the front and rear of the load compartment,” he said. “These are cameras to better estimate the loading volume and we have developed a software program especially for this trailer that allows the planner to load the trailer optimally.”

These aerodynamic features, according to Van Eck, will also be tested in the intermodal shipment if they withstand all forces coming from the high speeds.

“Now that the trailer has been made suitable for transport by rail, we will see when we can start with a test-drive where the trailer will be put on the train in Luxembourg and taken off again at the Spanish-French border,” said Bertens. “The versatility of the Aeroflex trailer is demonstrated by the fact that it can also be part of a Super Eco Combi or Twin Trailer combination.”

“As a project committee, we have always advocated for Van Eck’s involvement in this project,” said Kraaijenhagen. “This company thinks along with logistics systems. You can also see that in their product portfolio. They are better than anyone familiar with the requirements of sub-sectors in road transport and can therefore respond in a practical manner to the questions we are working on with this project.”

The Aeroflex project aims to develop and demonstrate new technologies, concepts and architectures for complete vehicles that are energy efficient, safe, comfortable, configurable and cost-effective, while ensuring that the varying needs of customers are satisfied by being flexible and adaptable with respect to continuously changing operational conditions.

The project title is an acronym for: Aerodynamic and Flexible Trucks for Next Generation of Long Distance Road Transport. It started in October 2017 and is expected to roll out its completed technologies in 2025.

The project has also received funding from the European Union's Horizon2020 research and innovation program.