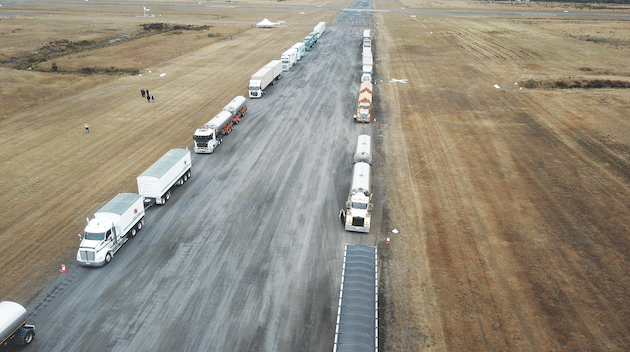 This milestone achievement, Bruzsa explained in a webinar presentation, is due to significant growth in uptake by operators over the last four to five years. There has been an exponential rise from zero in 2008 to 10,000 in 2019, with the curve having flattened slightly over the past year.

“There are now more than 10,600 PBS combinations currently approved in Australia which is a significant achievement and certainly far exceeds the predictions of the PBS interim review panel back in ’06 that suggested 12,000 PBS approvals would be reached by 2030,” said Bruzsa.

He added that while 57 per cent of the PBS approvals to date are for truck and dog combinations, in recent years there has been a rise in semi-trailer PBS approvals – including quad-axle, 20m long and 4.6m high trailers, while roughly equal numbers of B-doubles and A-doubles make up the bulk of the remainder of PBS approvals.

Turning to PBS tanker approvals, Bruzsa said the number is relatively small in the overall PBS scheme of things, comprising 525 combinations equating to just under five per cent of the total.

However, the segment has seen consistent year-on-year rises over the past six years, having started at 75 units in 2014.

At 204 units, close to half the current PBS tanker tally comprises A-doubles, followed by B-doubles with 153 units and truck and dog combinations at 86 units. Meanwhile, semi-trailer and road train combinations are relatively thin on the ground with 19 and 17 units respectively.

“Of these, roughly 60 per cent are non-dangerous goods (DG) and 35 per cent are DG tankers with the remainder operating in both schemes,” said Bruzsa.

Returning to the overall PBS picture, he noted that the production of PBS-approved equipment is no longer a niche market and that there are now around 60 truck and trailer manufacturers participating.

Bruzsa noted the NHVR has been active in seeking amendments to the PBS standards in order to achieve even better productivity outcomes for operators.

“We submitted the proposal to the Transport Ministers last year and they approved the change to the Frontal Swing standard which means that as of 1 April this year the measurement has increased from 0.7m to 0.85m, which provides the opportunity to use twin-steer prime movers or prime movers with a longer front overhang in PBS combinations, thus providing additional operational flexibility,” said Bruzsa.

“The Ministers conditionally approved the other two proposed changes; in terms of the Directional Stability Under Braking we are developing a transitional arrangement involving determining the implications of having a mix of old and new technology in the combination.

“The Pavement Horizontal Loading update is also approved in principle, subject to safety assessments being undertaken, and some jurisdictions also want us to do additional testing to verify road wear.

“This amendment would mean Type 2 A-doubles wouldn’t be limited to 85 tonnes, with the gross combination mass able to be increased without needing an exemption.”

Bruzsa said the NHVR would endeavour to finish the work on these two outstanding Phase 1 amendments by the end of this year, while at the same time developing a plan for Phase 2 of the standards review. This would involve the NHVR seeking industry input to guide the prioritisation of the next group of standards for review.

“We will be sending out a survey and relying on operator input in terms of which standards industry thinks are critical and currently causing operational problems,” said Bruzsa.

In conclusion, he intimated that the overarching aim of the NHVR is to effectively work with industry to ensure PBS reaches its full potential in improving operational efficiencies in the road transport realm.

International interest for the Australian scheme for high productivity vehicles is on the rise as different territories look at adapting Performance-Based Standards to meet the challenges of growing consumer economies in accordance to their unique environments.