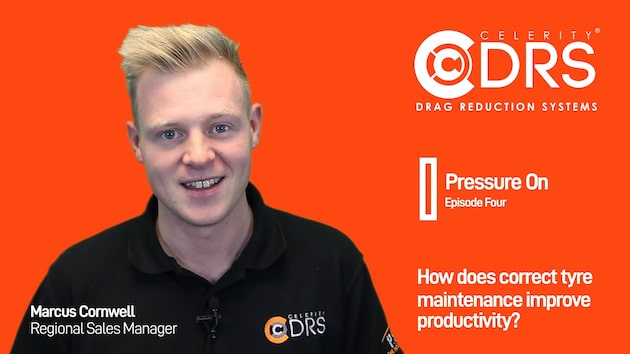 In episode four of Pressure On, Celerity DRS’ Marcus Cornwell talked us through some of the negative impacts on the environment that underinflation of commercial vehicles’ tyres can have. The main takeaway was that underinflation leads to a shorter tyre life and uneven tyre wear. Therefore the tyre has to be replaced more often and with less chance of the tyre being re-tread, which is far cheaper and much more environmentally friendly than the manufacturing of a new tyre (up to 70 per cent saving in oil when retreading a tyre vs manufacturing a new tyre).

In the latest video, episode four, Marcus provides a brief look at the repercussions of not looking after your vehicle’s tyres, and the effect that can have on the vehicle’s productivity and the wider economy.

Vehicle downtime is one of the biggest worries for business owners and fleet managers alike, and unfortunately whether it is planned or unplanned, there will always be a cost associated with it. There are many factors that can contribute to a vehicle being off the road, and according to a study carried out for Highways England, there are on average 12,000 incidents a year relating to tyre failure on commercial vehicles, with just under 50% of those incidents taking place on a “live” lane. This can lead to catastrophic consequences for the vehicle driver and other road users.

According to the study, the cost of lane closures depends on the number of closed lanes and the duration of the closure. A four lane UK motorway at 80 per cent capacity, when closed for two hours costs an estimated £730,000, however if it is running at 40 per cent capacity this closure costs £120,000 – both quite staggering figures when considering the average lane closures within a 12-month period stands at just over 40 days (an average cost to the UK economy of £180,000,000 a year!).

So, what can be done to reduce unplanned downtime?

Although it is impossible to completely eliminate the costs of downtime (as accidents or breakdowns are virtually inevitable), you can find ways to minimise the impact. Technology can provide just such a method, as most fleet tracking software systems can set alerts for maintenance schedules, safety inspections, tests, and record incidents such as breakdowns.

Often, accidents and breakdowns occur when daily vehicle checks are not correctly adhered to, the same can be said for preventative maintenance, duty of care inspections and driver training schedules. Effective driver training programmes often lead to reduced incidents and less vehicle wear and tear which, in turn, reduces unplanned downtime in the future.

Tread Carefully, provides advice on drivers daily walk around checks, suggesting that operators should ensure drivers carry out a visual inspection of tyres as part of their daily walk-around checks. This should include looking for foreign objects in the tread, suspicious bulges in the sidewalls and uneven wear patterns. Operators should also ensure that pressures are regularly checked, either by their own technicians or others employed by a third party. An alternative solution would be the installation of an Automatic Tyre Inflation System, which is a system that will maintain tyre pressure at all times, even when the vehicle is stationary or travelling to its destination.

Having an ATIS installed on your trailers is an important first step in keeping your vehicles efficient, productive and delivering your goods and products as safely as possible. The economic impact of underinflated tyres and poor tyre maintenance can become overwhelming if left unchecked – make sure you take all the necessary steps to increase your fleet’s uptime.

For further information, visit the Celerity DRS website or connect with us on LinkedIn.

Having worked closely with Europe’s leading axle manufacturers, the Automatic Tyre Inflation System has been refined and perfected for the European trailer market, with partnerships now in place with all of the major manufacturers who provide their own brands of the system. Examples include the SAF Tyre Pilot, BPW Air Save, Schmitz RFS, JOST’s Plug & Play ATIS, SAE-SMB Airmax and Assali Stefen TIS (Tyre Inflation System, with more to come in the near future.

Episode One: Celerity DRS on the difference between TPMS and ATIS.

Episode Three: The impact of tyre wear on the environment with Celerity DRS.