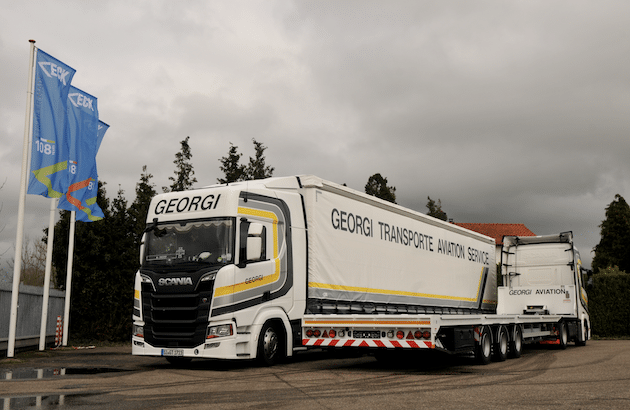 Georgi Fleet Manager, Hubert Hohl, said Van Eck supply trailers with an internal loading height of more than three metres and also carry out orders precisely “which is very evident with these trailers, which are equipped with numerous facilities to simplify and speed up loading and unloading”.

The latest trailers from Van Eck feature sliding rooftops and the capability to raise the entire roof 60 centimetres over its full length. Also, the side walls at the rear can be shifted outwards to accommodate tall and wide machinery.

Immediately after delivery, the first of these two trailers left for Amsterdam – the Schiphol branch of Georgi to load a machine.

Georgi also has branches in the Czech Republic and Poland, as well as directly at Frankfurt and Leipzig airports.

Van Eck has been supplying Georgi with trailers since the mid-1980s.

“We have seen the company grow further and further because it has always opted for the most efficient equipment,” said Hans van Eck.

Georgi has a fleet of 400 tractor units and 470 trailers.

“It is also striking that Georgi is one of the few German haulers that has a number of LHVs working on a structural basis for several customers,” Van Eck said in a statement. “In addition to air freight, Georgi also specialises in pharma transport, dangerous goods, conditioned transport, machine transport and the transport of high-quality cargo.”

Van Eck Trailers is a household name in the Dutch trailer manufacturing sector.