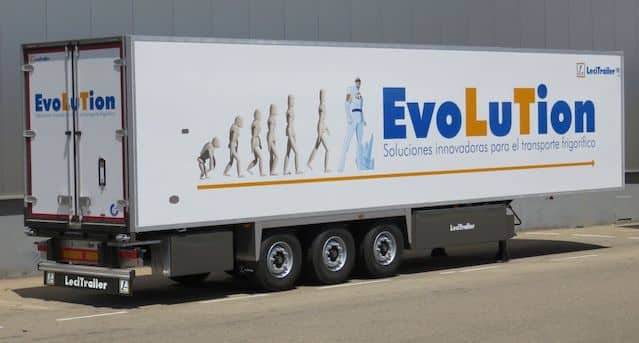 Research and investment in R&D and innovation capacity has reportedly been constant in this product segment, making continuous improvements that have led to the launch of Evolution, an updated and modern refrigerated vehicle, twice robust and strong than the previous version.

“It has been painstakingly worked on its structure, integrating more vertical fibreglass reinforcements on the sides and inside it is equipped with higher density polyester,” Lecitrailer said in a statement.

“The floor has been reinforced, tested and certified to optimise the most demanding efforts. The one-piece fibre panels and the thermal bridge installed in all Lecitrailer refrigerators prevent internal temperature fluctuations and reduce both the consumption of diesel fuel by the refrigeration unit and its possible deterioration and maintenance costs.

“To increase the load capacity of the refrigerator, it has been possible to obtain a greater interior width between skirting boards and panels without reducing the 65 mm of the side panels. The new rear frame is wider and reinforces the bond with the side panels.”

Lecitrailer said the Evolution model features the most innovative components and accessories available on the market due to collaboration with the best European suppliers.

The chassis has up to 10 years of warranty against perforation due to corrosion since it has been subjected to the Lecitrailer KTL treatment, which provides vehicles with a uniform coating in the entire surface of the 50 micron primer chassis.

Lecitrailer also provides 24-hour service to assist fleets in Spain and throughout Europe.

“It should be noted that all these improvements have been tested on the fatigue bench that Lecitrailer has in its Casetas factory and that have been carried out without increasing the tare weight of the vehicle, resulting in a much more resistant, safe and profitable refrigerator for transporters,” said Lecitrailer.

“After more than 6,000 Lecitrailer refrigerators circulating on European roads, Evolution is a point and followed within the Lecitrailer cold range, faithful to the philosophy of the brand that looks beyond current solutions to continue evolving and offering vehicles more competitive to carriers, always on the solid foundation that only a prestigious Spanish manufacturer and market leader for more than 20 years can have.

“With the company's total customer orientation and service vocation, a promotional campaign that includes free four-year LT Plus maintenance with a replacement vehicle included and a four-year warranty extension, accompanies the launch of the new generation of refrigerators.”