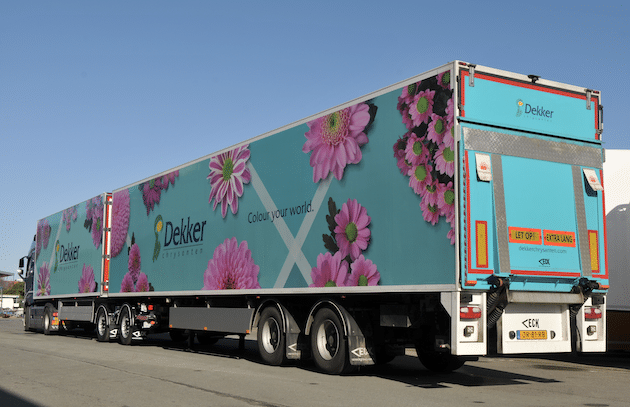 In order to be able to serve the growers with fresh cuttings from the head office in North Holland, the six Dekker Chrysanten trucks drive almost round the clock.

“We have six trucks, 12 trailers and 14 drivers because we do not prefer to leave trucks stationary,” said Dekker Chrysanten Head of Logistics, Aschwin Hooyboer. He added that two trucks are now being used as LHV. “This allows us to carry more block pallets. A total of 42 pallets will be carried in the LHV. So with both long combinations, we get three trailer combinations off the road.”

Van Eck built a new front part for Dekker Chrysanten to which the standard trailer is coupled. However, this part was also equipped with a slider lift.

“We do this because we cannot unload at a dock by every grower,” said Hooyboer.

Both LHVs operate exclusively within the Netherlands. Van Eck has prepared the equipment for the transport of flower carts.

“That way, we can also recharge effectively and our combinations run empty less often,” said Hooyboer.

Dekker Chrysanten does not go far enough to reduce the number of trucks on the road while maintaining a consistent transport performance.

“We will start using the first LNG trucks during the year to further reduce the environmental footprint of our transport performance,” said Hooyboer.

“Ultimately, we also intend to drive the LHV with LNG trucks in front of it.

“An additional advantage is that these trucks are more comfortable for the driver and that they will use this gas economically. This is how we make our transport activity in the Netherlands more sustainable, which we can safely call intensive,” he said.