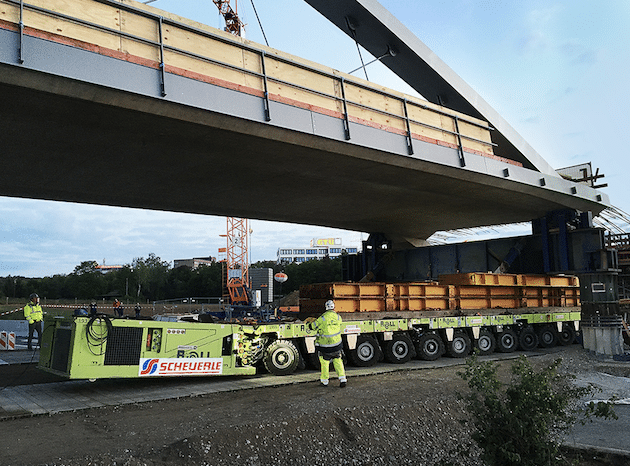 German logistics company, Schmidbauer, specified SCHEUERLE Self Propelled Modular Transporters (SPMTs) for reliable and precise means to move a bridge (1,500 tonnes, 130 metres in length) via a motorway to reach its final destination.

The transport combination weighed a total of 2,000 tonnes.

Stefan Schmidbauer, Technical Manager of the Large Crane/Heavy Lifting Division and Managing Director of the Schmidbauer Group, and his team are experienced heavy lift experts. They opted to use SPMTs from SCHEUERLE Fahrzeugfabrik, a subsidiary of the Transporter Industry International Group (TII Group).

The team had to move quickly during the night to Sunday because the traffic was expected to flow again on the Monday morning.

“Basically nothing could be allowed to go wrong during transportation,” said Stefan Schmidbauer. “This is why we opted for SPMT axle lines from SCHEUERLE.”

A total of 56 axle lines were required in order to distribute the load of the bridge, support beams and sub-structure as well as SPMT modules totalling 2,000 tonnes over the 224 wheels so that the load on the ground was kept to an absolute minimum. In order to guarantee safe transportation of the bridge, Schmidbauer formed four individual transport platforms using the individual SPMT modules, each with 14 axle lines which were then driven using in a loose coupling mode formation. Four power packs from SCHEUERLE with a total output of around 2,000 hp provided the drive.

Although the distance from the pre-assembly area to the jobsite was only around 150 metres, the construction management team had calculated that a two-hour drive was required.

“The biggest challenge on route was to drive absolutely synchronously with the four SPMT transport platforms in a loose coupling mode,” said Stefan Schmidbauer.”

He explained the centre distance between the platforms was 80 metres while the width between the transport modules measured seven metres. The route was previously paved but the SPMT transporters still had to compensate for height differences in both the longitudinal and transverse directions to the road.

“In particular, we had to make sure that the transport did not move into an inclined position due to the difference in height between the two lanes,” said Stefan Schmidbauer.

The sophisticated vehicle technology along with the know-how of the heavy-duty professionals from Schmidbauer seamlessly complemented each other. In addition, service technician Tobias Vesely, a SCHEUERLE expert, was on hand to assist the Schmidbauer team.

“This is not the norm but nothing untoward was allowed to happen during this transport,” said Vesely. “Traffic flow on the A8 had to recommence on time. If there had been a technical problem, I could have helped immediately.”

The vehicles from SCHEUERLE functioned absolutely reliably, according to Schmidbauer, and the route was quickly mastered. The SPMT axle lines moved steadily towards the final destination metre by metre. Even the extremely precise positioning of the bridge on the piers posed no problems.

“We had a maximum of two centimetres of play and thus had to work with corresponding precision,” said Stefan Schmidbauer.

However, the extremely sensitive multi-directional steering and the precisely metered high axle compensation of the SPMT transporters allowed the vehicle operators from Schmidbauer to position the bridge on the piers with pinpoint accuracy.

“The outstanding technical quality of the SPMTs contributed a great deal to the success of the operation,” said Stefan Schmidbauer. “For this reason and because of the excellent support provided by the manufacturer, we decided on the SPMT from SCHEUERLE,” explained Schmidbauer. “SCHEUERLE simply has the most experience with such axle lines as well as having the largest number of them on the market. Our experience with the SPMT proves that the module transporters function with absolute reliability. This is why there was no alternative available for this particular assignment.”

After the excellent experience gained from this weekend, Schmidbauer is looking to enhance his SPMT fleet.

“Everything worked perfectly: the coordination of the transport, the fine running sequence of the axles, the control of the transport,” said Stefan Schmidbauer. “We will definitely be ordering additional SPMT axle lines.”

The future of heavy load mobility is shining bright for TII Group. A focus on product quality and innovation to manage complex transportation tasks is key to the manufacturer’s international fame.