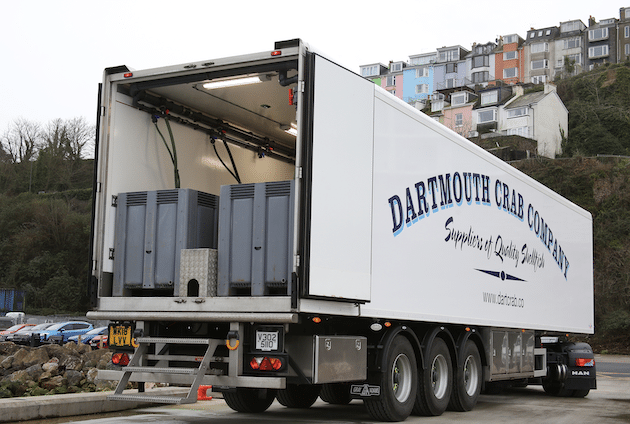 The new Vector HE 19 unit is mounted to a 13.6m Gray & Adams reefer trailer and joins six similar trailers already in operation, each specially modified for the transportation of live shellfish to customers across the UK and into Europe.

“The nature of the product we transport means we need a powerful trailer refrigeration system that’s up to the task,” said Dylan Huxley, Transport Manager at Dartmouth Crab Company. “However, because we operate long delivery routes, noise levels are a major consideration for our drivers when they’re parked overnight. The new Vector HE 19 unit is definitely one of the quietest systems out there, so we’ve certainly ticked that box.”

Upon delivery, a new trailer undergoes extensive modification, with tanks, air pumps and a myriad of pipe work added to aerate the sea water and keep up to 11-tonnes of shellfish in prime condition. Unloaded directly from the company’s crabbing vessels in Devon and Caithness, Scotland, the live shellfish are then delivered to customers across the UK, France, Spain and Portugal.

“It’s vitally important that we maintain a consistent temperature in both the trailer and sea water. Because the shellfish are transported live, their natural body heat, coupled with friction created by the aeration process, means the load is constantly trying to warm up, which has to be countered by the fridge unit,” said Huxley.

“When delivering into southern France and Spain we also have to factor in the temperature differential between the water where the product was caught and where it will be stored, meaning we allow the load to naturally warm up slightly prior to delivery. The refrigeration system has its work cut out on every journey,” he said.

“We hadn’t ruled out trying a competitor system, but the personal service we received from Carrier Transicold when we made our initial enquiry was exceptional,” said Huxley. “They went above and beyond to accommodate our requirements, and once we’d seen how the new Vector HE 19 unit was lighter, more fuel efficient and more environmentally friendly, the decision to stick with Carrier was a simple one.”

Based in Brixham, near Plymouth, Dartmouth Crab Company has been catching and distributing shellfish for more than a decade.