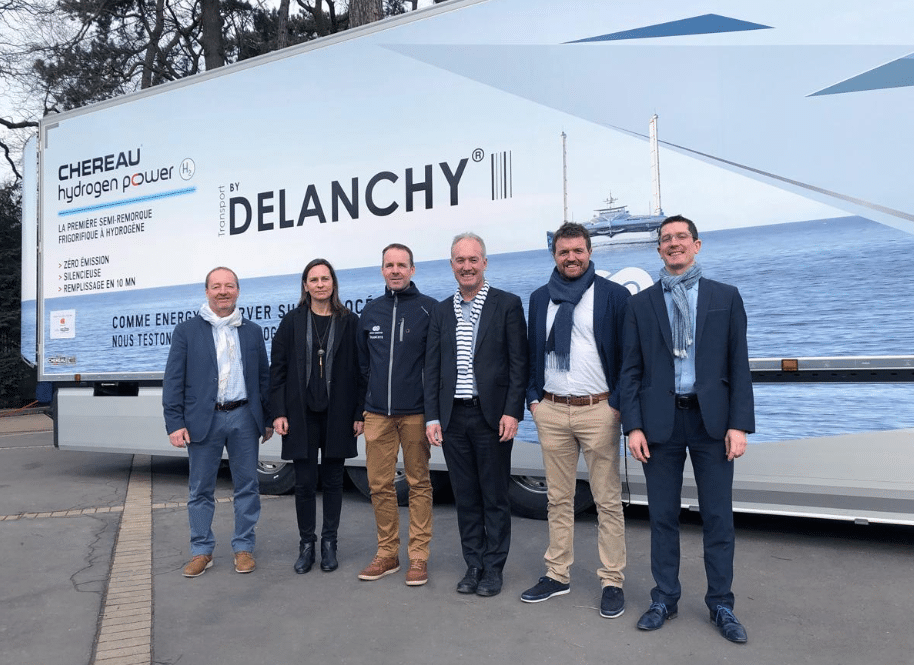 The Delanchy Group is pursuing the development of the Chereau Hydrogen Power H2 semi-trailer.

At the Solutrans exhibition in November 2019, Chereau and its partners successfully concluded the ROAD collaborative project. The Normandy-based manufacturer also announced the launch of four new ranges from the ROAD project, including the Chereau Hydrogen Power H2 range.

The Chereau Hydrogen Power H2 refrigerated semi-trailer produces its own refrigeration without any CO2 or particle emissions (the only emission being water vapour), and operates completely silently with an operating mode that does not change the customer's habits as hydrogen recharging only takes ten minutes. The role of a fuel cell is to produce electricity from hydrogen, and it is this electricity that powers the refrigeration unit and the semi-trailer equipment that requires energy.

By 2022, Chereau aims to deliver ten hydrogen-powered vehicles, the first of which, from the ROAD collaborative project, will be provided to the Delanchy Group, which will continue its operational tests.

Delanchy, which is also very committed to new energies and the hydrogen industry through its support for the Energy Observer project, would like to support Chereau in the continuation of the test phases of this new generation of clean vehicles. The objective is to market a mature and proven solution as quickly as possible, which is not only environmentally friendly, but also economically relevant.

The majority of the Chereau Hydrogen Power H2 range has already been reserved by customers who also want to accelerate the energy transition of their vehicle fleets via the hydrogen solution.

“We are convinced that we need to get things moving, to drive the change and not simply wait for it,” said Delanchy Group CEO, Brigitte Delanchy.

“Chereau has been an important partner for Delanchy for many years, and we are pleased to be able to test under real conditions and to develop this first semi-trailer, which is powered by hydrogen, an energy we have long believed in.

“In line with our support for the Energy Observer project, we are thus proud to put hydrogen at the heart of our activities and in the world of road transport,” she said.

Since 1968, Delanchy Transports has been a family-run and independent group, specialising in the transport and logistics of seafood and fresh products under positive controlled temperature.

More than 50 years of expertise enable it to meet all types of demands, with services for many customers, from the smallest to the largest food processing and distribution groups.

Committed to the energy transition in the transport sector, Delanchy's ambition is to move forward without waiting for changes to take place in its business. The Group is building its own 'energy mix' by operating trucks that comply with the latest standards in force on a daily basis, 100 per cent electric refrigerated trucks in urban areas, and gas and biogas vehicles at various agencies.