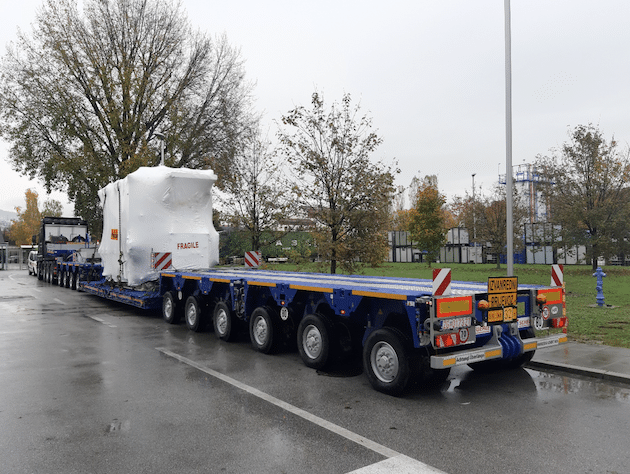 The heavy-load and national and international logistics providers, Zagrebtrans, relies on platform vehicles from the UltralightCombi series from SCHEUERLE for transporting components for the energy industry.

The UltralightCombi's loading capacity and compatibility with other Combi series modular vehicles was reportedly key to Zagrebtrans's purchasing decision.

Zagrebtrans, headquartered in Zagreb, Croatia, has expanded its fleet of vehicles through the addition of an UltralightCombi transport combination from SCHEUERLE, a subsidiary of the internationally active Transporter Industry International Group (TII Group) belonging to the Otto Rettenmaier.

“The decisive factor for the investment was the technical sophistication of the product and the particularly favourable dead weight per axle line in this vehicle segment,” said Zagrebtrans Technical Manager, Davor Radenić.

Depending on the version, the lightweight transport modules of the UltralightCombi series are available with a dead weight of around 2.2 tonnes per axle line.

The Zagreb-based heavy-load and national and international logistics provider is using a combination comprising four UltralightCombi modules from which a 5+7 combination can be configured. Between the five axle lines at the front and up to seven axle lines on the rear platform vehicle modules there is a slab deck featuring a loading length of 8,000 millimetres in the low deck. This combination allows a payload of around 120 tonnes with a dead weight of 46.3 tonnes. With the help of the UltralightCombi, Zagrebtrans transports mainly large but relatively light components for the energy industry. This includes transformers as well as the relatively lighter components of wind power installations.

The decision to purchase was also based on the long-standing relationship of trust between Zagrebtrans and SCHEUERLE.

With the FlatCombi platform vehicles, which have a very low loading height, Zagrebtrans transports particularly heavy and high wind turbine components such as turbine housings, the so-called nacelles. The combination capability of the slab deck allows the heavy-load logistics operator to use it either in combination with UltralightCombi modules as well as with the FlatCombi transport platforms. The compatibility of the loading area module with other Combi series vehicles is a major advantage for Radenić. It saves Zagrebtrans additional investment in special equipment.

Zagrebtrans is also reported to save money regarding the approval procedure for heavy goods transport. In this respect, this is covered by a special regulation in Croatia. Here the fee for granting the approval is calculated depending on the total load and transport route. The weight-optimised UltralightCombi clearly has an advantage over heavier transport solutions.

With axle line loads of twelve tonnes at 80 km/h, the platform vehicles of the UltralightCombi series are suitable for transporting large but relatively light loads on public roads. Construction machinery, components for wind turbines, containers, transformers and crawler crane components are typical loads. Another advantage of the series is the easy handling. For example, the front bogie unit can be removed for loading operations so that, for instance, self-propelled machines can drive onto the low-deck trailer from the front by means of a flat ramp. With a width of 2.55 meters, the UltralightCombi fully complies with EC standards and road traffic licensing regulations. However, the operator does not have to compromise on safety regarding wider transport platforms. The UltralightCombi has an identical support span as 3 m-wide vehicles.

The UltralightCombi modular platform vehicles are available in two-, three-, four- and five-axle versions. The modular design of the UltralightCombi vehicles facilitates use as a trailer and semi-trailer as well as a bolster or low-bed combination. The UltralightCombi axle lines score with a particularly favourable payload-dead weight ratio. Available equipment options include excavator, slab and frame decks as well as crane and wind tower adapters.