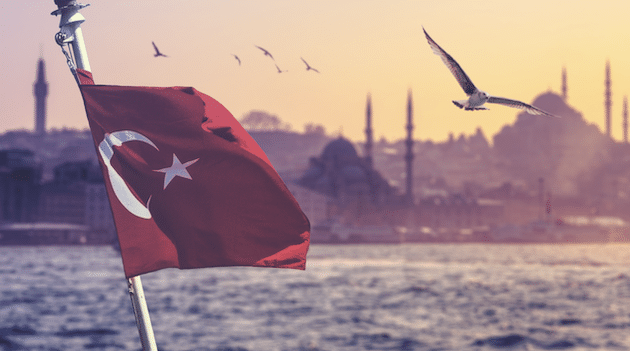 Growing geopolitical unrest and trade tensions in the region has done little to hamper the projected economic outlook in Turkey as central banks have helped boost confidence and mitigate economic downturn despite the recent threat of US sanctions and military actions in nearby Syria.

Turkey was on track to see growth of nearly 3.0 per cent GDP this year even as the Turkish lira, one of the worst hit of the emerging currencies in 2019, surged amid doubts of whether, given its human rights abuses following the failed coup in 2016, Turkey should remain part of NATO, of which it was a long-standing member.

As it extended its maritime claims in the Mediterranean, Turkey has managed to evade having economic measures imposed on it despite heavy criticism from NATO leaders following its decision to purchase Russia’s S-400 anti-aircraft missile system – a system chiefly designed to shoot down NATO military aircraft.

The Turkish Central Bank, through adjustments to reserve requirements to cultivate credit from lenders, had been prompted to provide emergency intervention on the struggling recession-hit economy by President Erdogan who criticised hawkish central bankers for failing to help stimulate sectors outside of its traditionally strong economies of motor vehicles ($26.8 billion USD), machinery ($15.8 billion USD) and iron/steel ($11.6 billion USD).

In manufacturing Turkey has been a supplier of the structural steel frame for the American F-35 Joint Strike Fighter jet and in the road transport industry it has produced the Ford F-Max, winner of the 2019 International Truck of the Year designed and developed over a five year period by Ford Otosan, headquartered in the northern gulf town of Gölcük.

The International Freight Forwarders Association claims that since the early 2000s, Turkey’s economic performance has been remarkable, prompting decreased unemployment rates and increased income levels, thus making Turkey an upper-middle-income country. By maintaining these macroeconomic conditions and focusing on structural reforms, Turkey has successfully overcome the major global recessions of 2001 and 2008/09.

However, after a slowdown in reforms in several areas in recent years, due to more challenging external environments, domestic political conflicts, together with some economic vulnerabilities, Turkey has experienced a slowdown in the second half of 2018.

Currently, fiscal stimulus drives an increase in private and public consumption, whereas investments kept decreasing for the fourth quarter in a row. Along with these conditions, the Turkish economy plateaued.

It can be indicated that manufacturing utilisation ratios are close to long-term averages and sales in the retail industry are showing a slightly increasing trend. The economy was projected to record zero per cent growth in 2019, though leading indicators suggested that the economy continued its recovery in the third quarter. Capacity utilisation in manufacturing is nearing long-term averages, retail sales are on a moderately increasing trend, and real sector indicators (confidence, purchasing managers index) have recovered to their levels of a year ago.

As for the country’s trailer market, it is in its most unfavourable conjuncture since the beginning of the 2010s. The principal reasons behind that, according to the International Freight Forwarders Association, are the volatility of foreign exchange rates and relatively higher interest rates. However, owing to the current rate cuts of the central bank of the Republic of Turkey and the stability of foreign exchange rates, there has been a stimulus in trailer sales. But this stimulus, caused by a relatively lower level of interest rate is perceived as a short-term investment opportunity rather than a long-term economic recovery impression or confidence.

Due to the slowdown in the construction sector in Turkey, the sales numbers in silo, tipper, and lowbed product types are extremely limited. The purchases are generally focused on curtainsider and reefer product types, which, upon closer inspection, are commonly segmented by customers with foreign exchange revenues that are international logistics companies.
The International Freight Forwarders Association has observed that there has been a shift into land-based transportation due to costs and conditions. Some curtainsider-dominant fleets have started to invest in reefers due to increasing competition in curtainsider transportation and restitution of freight cost.

Over the past few years, as a result of RORO transportation losing its competitive advantages, the Association has noticed that fleet operations that prefer swap bodies have also been postponing or cancelling their investment plans.

“For the past three years, the sales volume for the trailer market in Turkey has decreased Dramatically,” said Çetin Nuhoğlu, President of the International Freight Forwarders Association. “In terms of export numbers, the figures are somewhat consistent and strong. However, import-wise, as a result of the foreign exchange volatility against Turkish lira and the fact that the economy is shrinking for the past three quarters, the sentiment is relatively problematic. On the other hand, as of Q4 2019, the trend reversal has started. The outlook is promising for the forthcoming periods. The GDP growth for 2020 has been forecasted as 5.0 per cent. The consumer price index for upcoming years is projected to decrease gradually. And the interest rates have been cut to investment-friendly levels.”