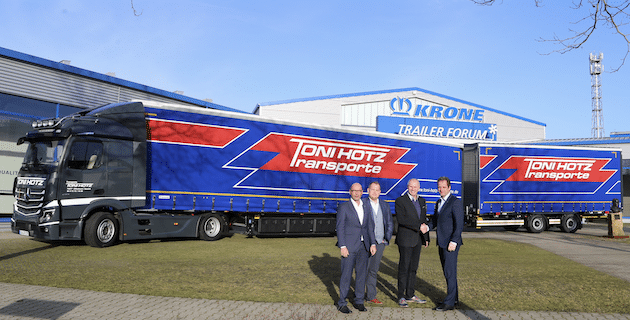 Alexander and Toni Hotz from Offenbach an der Queich are enthusiastic about their first experiences with the Giga Liner.

“Since we mainly drive cardboard packaging, which only weighs very little, we can carry 56 per cent more load per trip with the long HGV and not exceed the 40-tonne limit,” said Alexander Hotz.

Four times a day the Giga Liner – a combination of a two-axle Mega Liner with steering axle and a two-axle central chassis with swap body – travels along a 62km route between Offenbach and Pirmasens, which is about 2,500 km per week.

The two entrepreneurs told Krone they were positively surprised by the very good curve running characteristics of the long HGV, the weight distribution as well as the braking distance.

Since the braking force is distributed to several axles, the braking distance of the vehicle is reported to be significantly reduced. As measurements by the German Federal Highway Research Institute show, the braking distance for a long HGV at 80km/h is 36 metres. In comparison, a standard truck needs 44 metres to come to a stop.

“And last but not least, the long truck also scores points when it comes to ground pressure; roads and bridges are subjected to less stress thanks to the distribution of the weight over several axles,” said Toni Hotz.

On behalf of the Krone team, Regional Sales Manager, Markus Gemmel, thanked the company for their almost 25 years of business.

“There are numerous arguments in favour of the long HGV, especially in times of the current climate discussion, and we are very pleased that Toni Hotz Transporte benefits so much from using the Giga Liner,” he said.

Toni Hotz Transporte was founded in 1990 and specialises in the transportation of cardboard boxes and automotive parts. The company's fleet includes 23 lowliner semi-trailer prime movers and 52 Krone Mega Liners.