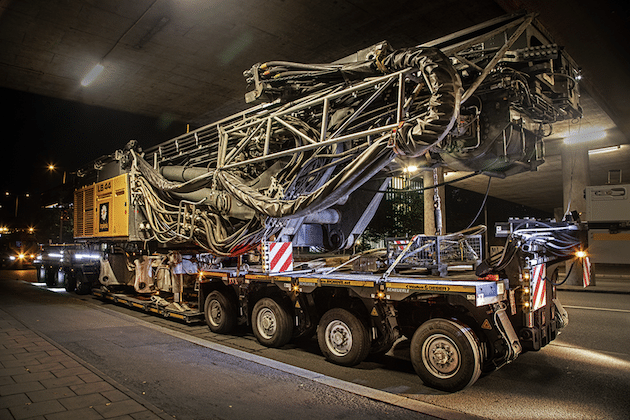 The OEM said that during the development of the new EuroCompact model, the focus was on ensuring much easier handling to ensure faster and easier loading and unloading of the low-bed semi-trailer when compared to the previous generation of vehicles. Other requirements included reducing the semi-trailer's dead weight to a maximum of 30 tonnes and decreasing axle loads. As a result, the new EuroCompact generation is extremely road-friendly. In addition, the weight of the respective transported goods can be optimally distributed on the flat bed decks while the fifth wheel load can be continuously adjusted.

Another outstanding strength of the EuroCompact series, according to SCHEUERLE, is that the individual vehicle modules regarding the front and rear bogie units as well as the excavator deck result in a 3+5 combination in the basic version, i.e. with three axle lines on the gooseneck along with five axles on the rear module. With the help of the single-axle SmartAxle Dolly, the combination on the front and rear bogies can be extended by one axle line. The axle loads, for example, are reduced from 12 to 10 tonnes with the same payload in order to meet the requirements for certain route corridors. On the other hand, the payload of the combination correspondingly increases.

“The EuroCompact is a vehicle developed from the experience gained in the field for use in the field,” said Horst Wallek, member of the management board at Wallek and Geser, a company that is part of the BigMove Group. “In the fight for driving personnel, it is especially important that we have a vehicle that makes it easy for drivers to operate. For us as a heavy-load logistics provider, it is of great importance that we are able to access the loading and unloading points when transporting increasingly larger and heavier construction machinery. The EuroCompact has an outstanding payload to dead weight ratio. This makes the task much easier for us.”

When unloaded, the EuroCompact is reported to he classified under the single-driver regulation because, in this instance, a combined vehicle weight of 41.8 tonnes is not exceeded. This is due to an optimised excavator deck where the dolly can simply be driven over. No deck modification is required.

“With the development and procurement of the new vehicles, the BigMove network has a particular advantage over its competitors,” said Wallek.

“The EuroCompact 'Chameleon II' model is easy to handle and can be flexibly used within the BigMove network due to its combinability. As a result, this enables us to fulfil the highest demands in heavy-duty transport assignments of all kinds.

“Moreover, the BigMove partners can easily exchange vehicles within the network without requiring any additional approvals. As the vehicles are completely identical in construction, the certificate of exemption applies to each of them,” he said.

The EuroCompact range includes weight and length-optimised semi-trailers which are reported to be ideally suited for transport tasks of up to 106 tonnes due to their versatile range of combination options.