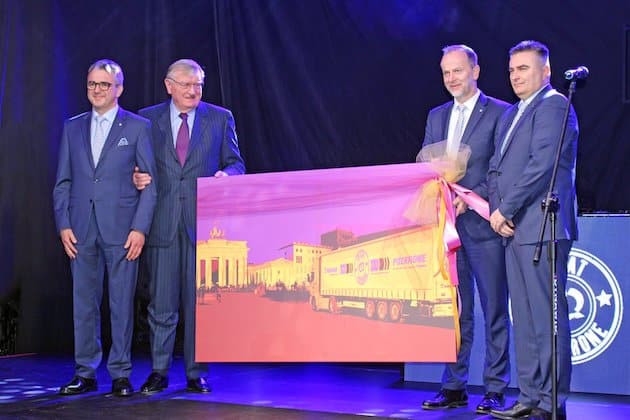 Commercial vehicle dealer, Pozkrone, has been responsible for the general distribution of Krone vehicles in Poland for 25 years.

The company was founded under the management of Barbara Towpik-Roszkiewicz and Roman Roszkiewicz in 1994. Since then, according to Krone, the company has been successfully selling Krone semi-trailers, trailers, swap systems, reefers and second-hand vehicles.

Pozkrone is located in Tarnowo Podgórne (near Poznań) in western Poland and has a total area of approx. 30,000 square metres. Fifteen employees work at the Tarnowo Podgórne site in the areas of administration, after-sales, accounting and used vehicles; a further 20 field staff take care of the nationwide sale of Krone vehicles. In addition to sales, Pozkrone also offers an extensive workshop and service network, so that original Krone wear parts can be quickly and easily obtained throughout the country.

Tomasz Kujawa and Maciej Michalski have managed the company since 2006; Barbara Towpik-Roszkiewicz now acts as an authorised signatory at Pozkrone and Roman Roszkiewicz as Chairman of the Supervisory Board of Pozkrone.

Over the past 25 years, Pozkrone has been able to sell almost 50,000 new vehicles in Poland.

“We are very grateful that Pozkrone, an extremely loyal, committed and competent partner in Poland, has been at our side for 25 years now, living the Krone values of customer proximity, quality, innovation and reliability every day,” Krone said in a statement. “It is not without reason that numerous awards, which Pozkrone has received in recent years, prove the excellent image of the company, such as the Gold Medal of the Poznań International Fair, the International Sales Award and the prizes Forbes Diamond, Business Gazelle or the Bisnode certificate. We congratulate them on their anniversary and look forward to continuing this great, fair and successful business relationship.”