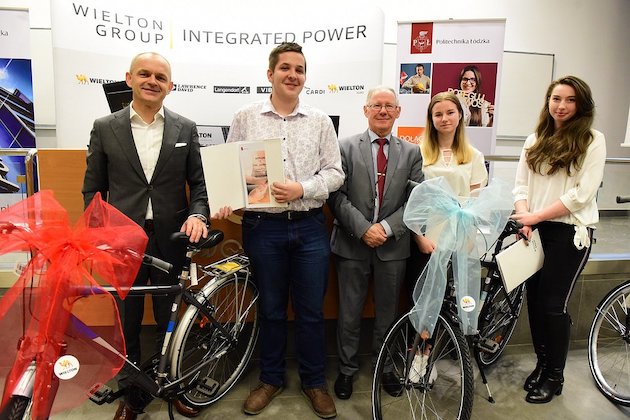 Polish OEM, Wielton, in cooperation with Lodz University of Technology, recently held the finals of its 'Wielton GO' competition for secondary school students from Wieluń.

Wielton said the 50 best participants completed a knowledge test, showing excellent knowledge of the company and its history, production processes and products.

Students also had the opportunity to learn about career opportunities at Wielton as well as Lodz University of Technology's education options.

During the final of the competition, Wielton handed over an industrial robot that will be used to conduct laboratory classes with students in various fields.

The winner of the Wielton GO competition is Piotr Szkudlarek from the II LO Janusz Korczak. The next places were taken by Monika Kalemba and Aleksandra Preś, students of the School Complex No. 1 in Wieluń. More than 200 people took part in the project addressed to the students of six Wieluń upper secondary schools, of which the top 50 met at the Łódź final.

Wielton GO is a response to the growing demand for educated specialists every year. Thanks to the mobile game, the company encourages young people to study in fields that will be useful during their further career in Wielton.

“Wielton GO is an innovative and modern, but most importantly an effective way to reach young people, as evidenced by the number of participants and finalists of the competition.,” said Wielton President, Mariusz Golec.

“For years, we have been cooperating with schools in Wieluń creating patron classes and encouraging young people to study in technical fields.

“We have also established cooperation with the Lodz University of Technology, with which we implement interesting and developing projects for young people. The combination of science forces and the potential of an international production company create an unusual opportunity to acquire technical knowledge and its practical use by students.

“We hope that they will have the chance to further develop their potential by joining the international team of the Wielton Group,” he said.

In the first stage of the competition, the participants played on their smartphones the mobile game Wielton GO, getting to know the company and answering questions related to it and solving logical tasks. After each task, they received points for which they could buy an element of a virtual semi-trailer, which had to be put together and sold. All players sold a total of 173 trailers, and the record holder sold six vehicles.

Within two weeks, the participants spent a total of nearly 300 hours in the game, accumulating almost five million points on their virtual accounts. The best advanced to the final, in which they answered 20 randomly selected questions. The winning three students received bikes as a reward, and subsequent participants received material prizes.

During the final, Wielton also transferred the Panasonic TA1600 manipulation robot to the didactic laboratory of the Institute of Mechatronics and Information Systems at the Lodz University of Technology. The robot is a kind of mechanical hand that will be used for didactic activities. Thanks to a specially configured position, students will be able to practice and fully understand robot work cycles and operating principles in safe conditions. These are necessary skills for future Wielton engineers, in which the automation of production processes plays an increasingly important role every year.

The Wielton GO game was used by more than 200 students from six Wieluń schools: I LO Tadeusz Kościuszko, II LO Janusz Korczak, the Catholic High School, School Complex No. 1, School Complex No. 2 Jan Długosz and School Complex No. 3 Nicolaus Copernicus. The competition is one of the projects within the framework of Wielton's cooperation with the Lodz University of Technology.