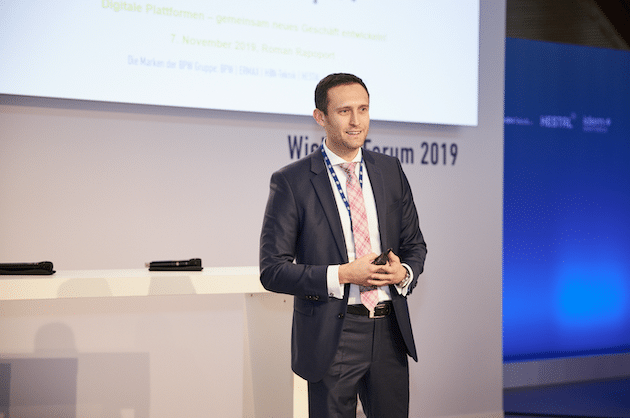 The BPW Group aims to be even more adaptable when it comes to developing and using new digital ideas, following its success in trailer telematics with Idem Telematics and its spare parts data aggregator, PE Data.

BPW Head of IT and Digitalisation, Roman Rapoport, demonstrated at the Wiehler Forum using telematics24.de as a project example.

Digitalisation is changing the DNA of companies: one example of this development is the BPW Group, which in just a few years transformed itself from a traditional firm in the commercial vehicle industry to an innovation leader of Industry 4.0.

The most recent example are trailer running gears, generated as 'digital twins' on the computer and accompanied by digitally networked services from production and assembly up to maintenance and spare parts service across nearly their entire lifecycle. The phrase 'born digital' also applies to big data and webshop concepts, such as those realised by BPW Group member company PE Data: commercial vehicle service stations can easily identify spare parts via scanning with a smartphone, and then ordering with just one click. Taking this even further is the BPW Aftermarket Group, which brings to the table a completely digitalised spare parts warehouse in the form of an overseas shipping container: the only thing that employees have to do now is pick out the parts they need – these are recorded, invoiced and re-ordered completely automatically. A core component of BPW's digital strategy is system openness: the collaboration with platforms, software and hardware from a wide range of providers has also transformed the telematics subsidiary, idem telematics, into the European market leader for networking vehicles, freight and drivers.

Companies can only stay successful if they not only digitise and network their business models, but also permanently develop them further, Rapoport reminded the audience at the Wiehler Forum. Boldness and the desire for change are the decisive success factors in digitisation, according to Rapoport. This ongoing change also always requires a change in corporate culture: an agile mindset, more personal responsibility and creative freedom for employees and a trust-based form of collaboration with partners are some of the most important ingredients in this regard.

The BPW Group is looking to open up more to digital players and platform operators in the future. Therefore, Idem Telematics has successfully partnered with Daimler Fleetboard and RIO as well as Schmitz Cargobull in recent years. However, it also depends on pace, Rapoport said: new platform ideas don't need to be launched to perfection, but can be implemented more quickly as prototypes and then intelligently further developed, taking new findings into account. He cited the new online marketplace telematics24.de as a project example. The platform is already online and is expected to develop into a cross-brand marketplace for telematics products and services in 2020. The goal is to depict product diversity to forwarders and vehicle manufacturers in a transparent and simple manner. That, too, is what BPW understands system openness to mean, Rapoport said.

(Image: BPW Head of IT and Digitalisation, Roman Rapoport.)