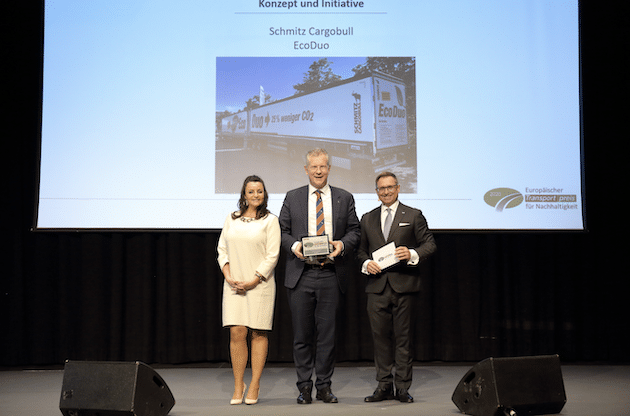 The EcoDuo transport concept by Schmitz Cargobull – two standard semi-trailers connected by a dolly and towed by a prime mover – has been recognised for its efficiency and reduced environmental impact at the European Transport Award for Sustainability.

“We see the EcoDuo as a long-term ecologically and economically efficient transport solution throughout Europe, which is why we are advocating the use of this concept for motorway trunking,” said Schmitz Cargobull Chairman of the Board, Andreas Schmitz, during the award ceremony on 21 November 2019 in Munich.

“The combination of existing standard trailers ensures flexible use in hub-to-hub transport outside urban areas,” he said.

The total towing weight of the semi-trailer tractor and first trailer remains at 40 tonnes, according to the OEM, while the towing weight of the second trailer can vary, for example, up to 36 tonnes, which currently complies with the regulations in Scandinavia. This vehicle combination is also being tested in Spain with a train weight of 40 tonnes on the first trailer and 30 tonnes on the second trailer.

“The EcoDuo combination is one of the few concepts that reduces CO2 emissions by up to 25 per cent and at the same time reduces costs for the state, consumers and the economy,” said Schmitz.

“By using these concepts, we can increase the competitiveness of German industry and make it worthwhile for companies to continue to produce in Germany and export their goods from here to all parts of the world.

“We are convinced of this concept because it does not require any additional purchases for the haulier and they can fall back on their current fleet,” he said.

The EcoDuo vehicle combination can be divided flexibly, for example at national borders, or in defined areas on two prime movers. Also, by using two standard trailers, the existing dimensions in the transport industry are reported to remain the same.

Schmitz Cargobull said the EcoDuo meets all safety standards with modern vehicles that are state-of-the-art in terms of technology, including axle and brake systems. The OEM added that all rail transport can continue and loading and unloading processes remain unchanged.

In other news, international transport firm, DWP & Sons, has become the first operator in the UK to incorporate Schmitz Cargobull’s latest technology to its fleet, adding 17 new tri-axle reefers fitted with the manufacturer’s most efficient cooling unit.