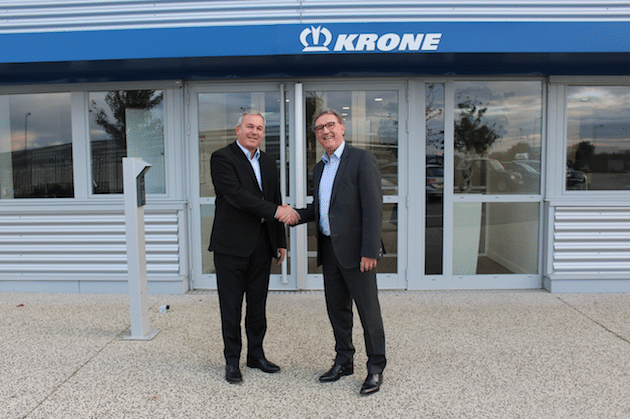 German OEM, Krone, is set to showcase its latest semi-trailer developments at the Solutrans trade fair in Lyon, France, next week following a change in senior leadership.

“While the Prof Liner is an all-round vehicle for a wide range of applications, the single-axle Profi Liner City is ideally suited to the challenges of inner-city supply traffic,” Krone said in a statement.

“With the Cool Liner, Krone offers a practical solution for the temperature-controlled transport of foodstuffs such as fruit, vegetables, meat, fish and frozen products, as well as plants, sensitive electronic components and sensitive pharmaceutical products. At Solutrans in Lyon, Krone will be showing the Cool Liner with a continuous chassis optimised at the rear, a stable body and comfortable equipment.

“The robust Box Liner eLTU70 has been specially designed for the tough daily business with frequently changing container sizes and impresses with its exemplary versatility as well as its low empty weight of 4,600kg in the basic equipment, which in turn enables high payloads.”

Krone will also be presenting its comprehensive range of trailer-related services in Lyon, including telematics solutions which are now fitted as standard in all of the OEM’s refrigerated semi-trailers, rental offers via Krone fleet and Krone spare parts.

During Solutrans – 19-23 November – Philippe Lamberet, long-time Managing Director of Krone France SAS, will retire, while his successor Jean-Philippe Féjoz will also be introduced.

Féjoz has spent most of his professional career at Volvo AB Group for the Renault Trucks subsidiary, most recently as Commercial Director.

“Over the past seven years, Philippe Lamberet has headed the Krone France team as a highly renowned industry expert, who has made a decisive contribution to the outstanding development of Krone's market share in France,” said Krone Managing Director Sales and Marketing, Dr Frank Albers.

“We would like to thank Philippe Lamberet warmly for this,” he said. “Together with him, we have found an excellent successor in Jean-Philippe Féjoz, who will take care of Krone France's business with immediate effect.”

Krone France is reported to sells approx. 2,000 new vehicles as well as approx. 500 used vehicles via Krone Used. The Krone Center in Pusignan/Lyon employs 25 people, including the Krone Fleet team. The total area of the centre is 20,000 m², of which 300m² is office space. The Krone Center carries out the local final assembly, maintains a 550 m² spare parts warehouse and a 200 m² service workshop.