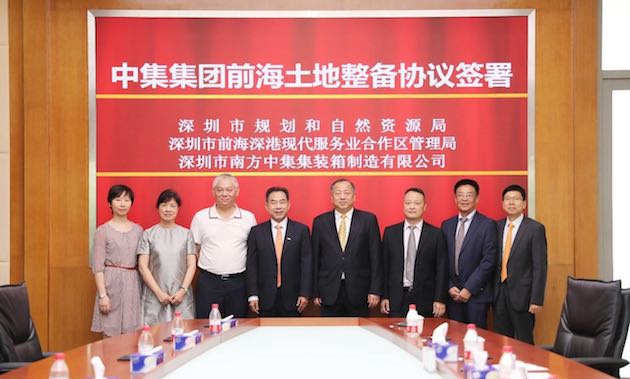 The parties confirmed that the compensation value of the Southern CIMC is about 12.89 billion yuan, and agreed to replace the land use right of the same value under the new planning conditions to the Southern CIMC.

According to the consolidation agreement, the parties agree to compensate the Southern CIMC according to the determined compensation value calculation method, that is, the 1 January 2015 is the time for the evaluation of the land value under the new and original planning conditions.

After deducting the policy rigid expenditure, the land value-added income will be compensated for 40 per cent of the remaining portion of the South China CIMC. The compensation value of the Southern CIMC, which was confirmed by all parties to the agreement, was approximately 12.89 billion yuan. At the same time, the parties to the agreement agreed to replace the equivalent land use rights with the compensation value of 12.89 billion yuan to the Southern CIMC.

According to the announcement, following the principle that the principle of planning indicators is unchanged, the business is relatively balanced, and the land is relatively concentrated, the parties agree that the replacement land area is about 92,100 square metres, and the total construction area is about 627,900 square metres. The land use right value of the replacement land is about 12.516 billion yuan, and the difference between the compensation value enjoyed by the Southern CIMC is 374 million yuan. The parties to the agreement agree to resolve the replacement of the equivalent value of land use rights in the difference portion by negotiation.

CIMC said in the announcement that signing the completion agreement will help accelerate the progress of land preparation in Qianhai, and will also help CIMC to seize the opportunity of Shenzhen's urban development and renovation, and enhance the overall efficiency and shareholder returns of the company's existing resources. In line with the overall interests of the company and its shareholders.

As the world’s top trailer builder in terms of combined vehicle output, CIMC Vehicles is turning to intelligent manufacturing to transition away from the ‘Made in China’ stigma associated with its mass production achievements.