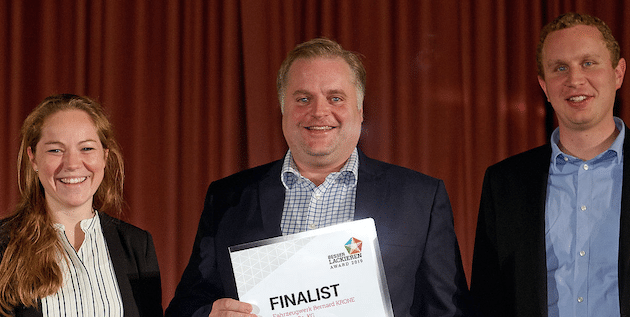 The Krone Commercial Vehicle Group was honoured at the 'Better Painting’ congress for its innovative coating centre in Werle.

The jury of experts, comprising editorial staff of the magazine Besser Lackieren and representatives of the Fraunhofer Institute for Manufacturing Engineering and Automation IPA, recognised top performance in the painting segment.

During a visit in Werlte, representatives of the jury had informed themselves comprehensively about the innovative and sustainable technology at the new coating centre.

Volker Perk, Head of Industrial Engineering at the Krone Commercial Vehicle Group, accepted the award on behalf of the Krone team.

In a short presentation, he presented the technical features of the ultra-modern coating centre, which Krone only officially put into operation in August 2018, to around 120 participants at the congress.

In the coating centre, chassis for semi-trailers are cathodically dip-painted and powder-coated to provide maximum protection against environmental influences.

The new surface sealing is reported to offer outstanding stability of value and high investment protection for customers as Krone trailers are weather-resistant and durable in accordance with the latest requirements.

Production in the new coating centre saves energy, resources and significantly reduces emissions according to Krone.

The German Energy Agency (Dena) has previously awarded Krone a lighthouse project for the energy-efficient use of waste heat. Carbon dioxide emissions are reduced by more than 30 percent per chassis. Krone invested approximately 40 million euros in the coating centre.

In other news, Alfons Veer will resign as Chairman of the Management Board of Bernard Krone Holding SE & Co KG at the end of 2019.