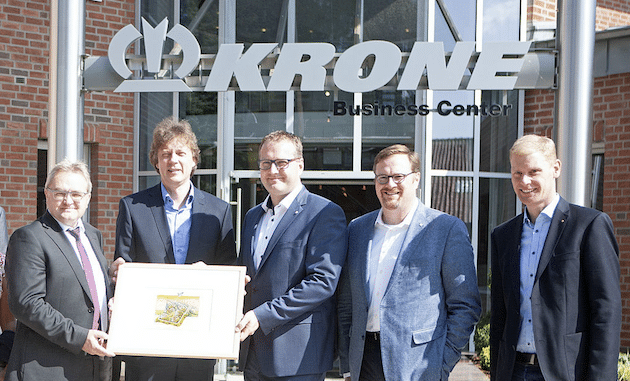 German trailer builder, Krone, has expanded its operations in Lower Saxony, Germany, with the official opening of a business centre in Haselünne.

“We are deliberately bundling synergies in the areas of accounting and IT so that we can continue to operate effectively and competitively with the Krone Group in Emsland,” Bernard Krone said in his official address at the  opening the new Krone location in Haselünne – the headquarters of the newly founded Krone Business Center GmbH & Co. KG which operates 100 per cent under Krone Holding.

Over the past five months, according to Krone, around 60 modern workplaces have been created in the rented building in Kreuzweg, which are now used by 55 Krone employees from IT and accounts payable.

The investment volume amounts to around €500,000. In addition, all employees who prepare monthly and annual financial statements for the Krone Group are also active at the Haselünne site.

“With this reorganisation in the areas of IT and accounting, we are bringing together the corresponding competencies from our German locations – Spelle, Werlte, Herzlake, Dinklage and Lübtheen,” said Bernard Krone. “We can now use the individual know-how and personnel capacities for the entire Krone Group across all locations.”

“We want to position ourselves further as an innovative and attractive employer in Emsland, which is why we are now also offering flexible home office opportunities, for example,” he said.