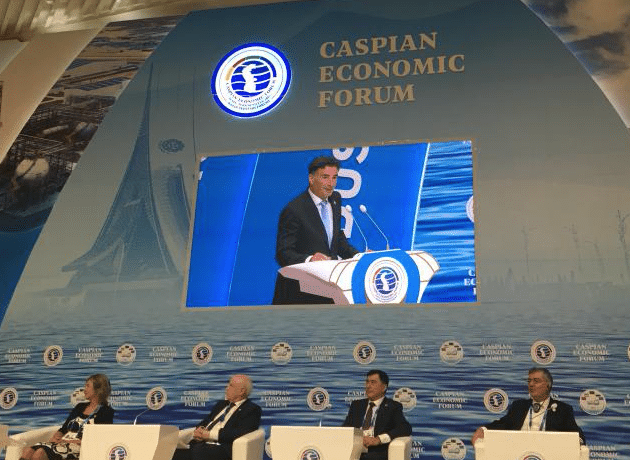 International Road Transport Union Secretary General, Umberto de Pretto, attended the first Caspian Economic Forum in Turkmenistan this month, where he called for nations to continue working together to advance transport links across the world’s largest inland body of water and beyond.

The Forum, which took place in the port town of Turkmenbashi on the Caspian coast, brought together six prime ministers and ministers of economy and transport from across and outside the region. Joining political and economic figures from the five nations littoral to the Caspian Sea – Russia, Iran, Kazakhstan, Azerbaijan and Turkmenistan – were more than 3,000 participants from some 60 countries and 40 international organisations.

Last year, the five Caspian Sea nations agreed to the Convention on the Legal Status of the Caspian Sea, which comprised various landmark agreements for controlling trade, tourism and investment across the sea. The Caspian Sea is one of the world’s foremost transport and trade hubs, having long been an important link between East and West (as well as North and South).

The IRU expects greater cooperation between signatory states will boost the region’s development, especially in the realm of transport, boosting trade between and beyond the Caspian region.

At the Forum, de Pretto met with Deputy Prime Minister and Minister of Foreign Affairs of Turkmenistan, H.E. Rashid Meredov. The two discussed Turkmenistan’s important position as a trade link between Europe and Asia, the growth opportunities road transport could offer the country, as well as possible areas for increased cooperation between Turkmenistan and IRU. Mr de Pretto also met with the Secretary General of the Shanghai Cooperation Organisation, Vladimir Norov, to discuss the latest developments in trade route operationalisation in member states, as well as the ongoing implementation of TIR.

Mr de Pretto used his appearance at the main Forum to call for convention signatory states to increase efforts and investment in developing regional transport links across the Caspian Sea – including developing the port, road and rail infrastructure necessary to facilitate intermodal and multimodal transports.

As trade develops between the countries using the Caspian as a thoroughfare, de Pretto urged nations to adopt modern international best practices for streamlining processes. These include ensuring vehicles are using the latest tech innovations, such as eTIR, e-CMR, and digital driver visa checks to speed up trade and create more seamless supply chains.

“Road transport continues to be the first and last leg of every journey, and it plays a unique role in the complex intermodal routes that make up the global transport network,” the IRU said in a statement. “As the Caspian region develops, greater investment in transport networks will allow communities along these ancient routes to grow and prosper long into the future.”