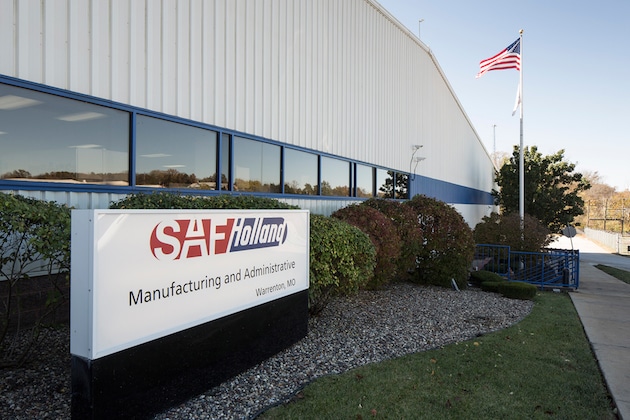 Equipment specialist, SAF-Holland, reported a group sales record of €695.5 million (+8.6 per cent) as part of its half-year financial results.

“Outside of the Americas region, the market environment for heavy trucks and trailers was challenging,” said SAF-Holland CEO, Alexander Geis.

“Despite this, our performance in the first half of 2019 has been satisfactory overall.

“Based on the expected industry-specific conditions, we are confident that we will meet the market expectations for the full year. The consistent implementation of the group-wide operational excellence programs and our ability to promptly and flexibly respond to fluctuations in demand are also essential prerequisites for reaching our targets.”

The additional contribution to sales from the companies acquired since January 2018 amounted to €34.5 million. Organic sales growth, which stemmed exclusively from the Americas region, contributed €4.2 million (net).

Positive currency effects resulting primarily from the appreciation of the US dollar against the Euro amounted to €16.4 million (previous year EUR -36.2 million).

Adjusted Group earnings before interest and taxes (EBIT) in the first half of 2019 improved year-on-year by 13.2 per cent, reaching €49.9 million (previous year EUR 44.1 million). The sharp rise in earnings achieved in the Americas region was able to compensate for the lower earnings contributions from the other regions. The adjusted EBIT margin for the first half-year of 2019 equalled 7.2 per cent (previous year 6.9 per cent).

At €27.6 million, cash flow from operating activities in the first six months of 2019 was significantly above the previous year's level of EUR -30.9 million. This improvement stemmed, above all, from a sharply lower increase in net working capital – despite a further expansion of sales. Net of the cash flow from investing activities in property, plant and equipment and intangible assets amounting to €24.2 million, the operating free cash flow improved substantially to EUR +3.4 million (previous year EUR -46.1 million).

“We will continue to diligently manage our net working capital in the second half of the year in order to achieve sustained positive free cash flows,” said SAF-Holland Chief Financial Officer, Dr Matthias Heiden.

Sales slightly exceeded prior year’s levels in the EMEA region.

Business with axle systems with integrated disc brake technology developed very favourably. In addition to the company XTRA Lease, a second well-known major fleet customer was gained. In the first half of 2019, a total of approximately 21,000 axle systems equipped with disc brakes were delivered to customers, corresponding to a growth rate of just over 105 per cent. In order to meet the growing demand, additional capacity will be created at the Warrenton site. The aftermarket business will also be expanded accordingly.

The market environment continued to be driven by strong customer demand for truck and trailer components, which led to persistent capacity bottlenecks throughout the industry and along the entire supply chain.

At €18.2 million, adjusted EBIT was well above the prior year's break-even level, as was the adjusted EBIT margin of 6.7 per cent (previous year 0.0 per cent). Contributing to this performance was a reduction in add-on operating expenses from €6.2 million in the first half of 2018 to €1.0 million in the first half of 2019. The contractual passing on of last year's steel price increases, lower steel purchase prices and lasting price increases in the US and Canadian aftermarket businesses also impacted earnings positively.

There was a continuous improvement in the overall situation in the North American plant network in the first half of 2019. SAF-HOLLAND launched the FORWARD project on March 1, 2019, in order to systematically realise the considerable optimisation potential identified and drive forward the network's turnaround. The focus of this project is to optimise the production and supply chain, the product portfolio, the aftermarket business and the procurement of material.

Market weakness in India places a burden on EBIT margin in the APAC region according to SAF-Holland.

During the first half of 2019, the APAC region increased sales by €15.7 million to €49.7 million. The additional sales contribution from the companies acquired since January 2018 was €20.3 million. Sales adjusted for currency and portfolio effects declined by 14.0 per cent year-on-year to a total of €29.2 million. The main reason for the sales decline was the continued weak market environment in India.

Despite the acquisitions in the previous year, adjusted EBIT, at €3.0 million, was only slightly higher than the prior year's figure of €2.9 million. The adjusted EBIT margin fell from 8.6 per cent to a level of 5.9 per cent. This decline in the margin was a result of the latest unsatisfactory sales and earnings development of the Indian subsidiary York.

Extensive re-organisation measures are underway in a challenging market environment in the China region.

The China region generated sales of €25.1 million in the first half of 2019 (previous year €36.3 million). This decline was the result of a shrinking export business due to the trade dispute between China and the US, as well as from cyclically short notice cancellations and delays in orders and temporary strikes following the announcement of plant closures.

Earnings were burdened by a low level of capacity utilisation at the Xiamen and Qingdao plants and temporary cost pressure from the existence of duplicate structures in the course of the integration of the other Chinese sites into the new Greenfield project. In addition, there were inventory impairments as a result of a significant decline in incoming orders and higher marketability discounts, as well as impairments on receivables as a result of the bankruptcy of one customer and pending legal proceedings against several other customers due to payment defaults. Altogether, this led to an adjusted EBIT of EUR -5.1 million (previous year €1.6 million).

To position itself successfully for further growth opportunities in the Chinese market, SAF-Holland sent an experienced team of experts to China to support the local management in starting up the new plant in Yangzhou, integrating the other Chinese sites into the Greenfield project, acquiring local customers and concluding long-term contracts. In this context, Jürgen Knott assumed the position of President for the China region as of 1 June 2019. Knott brings with him extensive management experience in the areas of operations, product development and sales of axles, brake systems and chassis components for commercial vehicles, in addition to several years of intercultural leadership experience, especially in China and Asia.

In light of the unsatisfactory sales and earnings development, the Group Management Board has decided to significantly accelerate the consolidation of the Chinese sites into the Greenfield project. The plant in Qingdao has ceased operations from 31 July 2019. The two Beijing warehouses have also been closed from 31 July 2019. Further footprint optimisation efforts will follow during the second half of the year including a downsizing of the Xiamen plant while the Greenfield plant is ramping up. The commencement of production at the new Yangzhou plant will be brought forward to the beginning of Q4.