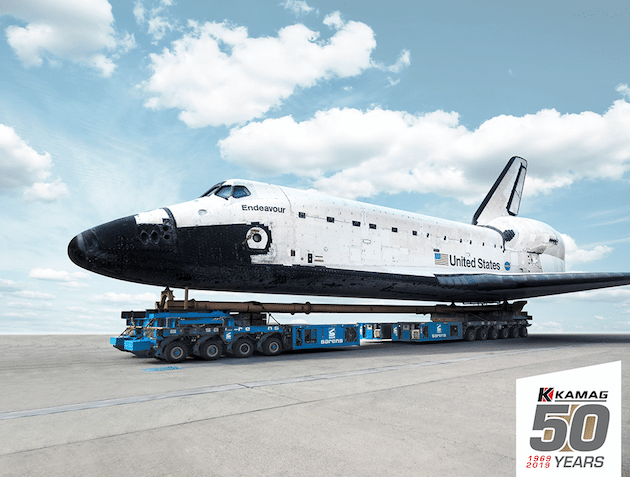 In 1969, entrepreneur Franz-Xaver Kögel and engineer Karl Weinmann founded the Karlsdorfer Maschinenbau Gesellschaft – Kamag. The business partners wanted to realise special transport solutions for the heaviest loads in order to be able to provide heavy-duty transport options on the roads independent of the railways.

The special vehicle business was successful from the beginning, according to Kamag. Strong internationalisation shaped the early days of the company and demand for the company’s equipment expanded from the domestic market to all over the world.

Since 2004, Kamag has been part of the TII Group which belongs to the Heilbronn-based entrepreneurial family enterprise headed by Otto Rettenmaier.

Rettenmaier acquired the company due to his enthusiasm and interest in the technology; he also wanted to leverage synergies with the two other vehicle manufacturers he already owned, Scheuerle and Nicolas.

Kamag produces innovative, robust and precisely controlled special vehicles which can transport extremely heavy payloads in the heavy and energy industrial sectors as well as for plant and bridge construction.

The Wiesel, a swap body transporter for yard logistics, features an electric drive system and an automated driverless version.

Kamag said there are more than 2,000 Wiesels currently used by logistics and transport companies.

In 1979, Kamag received a challenging contract from The National Aeronautics and Space Administration (NASA). The US space agency needed transport solutions for the transport of individual rocket components which were not only highly sensitive but had also to be positioned extremely precisely and with millimetre accuracy. Since then, the US space agency has repeatedly placed orders with Kamag, for example, to move service towers for the launch pad at Cape Caneveral.

Boeing Aerospace Industry is also another well-known company that is part of the Kamag´s impressive list of customers. The aerospace company received vehicles from Ulm with payloads of up to 200 tonnes for transporting rocket engines.

TII Group subsidiaries are increasingly focusing their attention on the combination possibilities between the products of the respective Group brands and the even more intensive use of synergies as well as the optimisation of the production concept.

Kamag is currently focused on electrified and highly automated transport solutions for yard logistics and internal transport at industries.